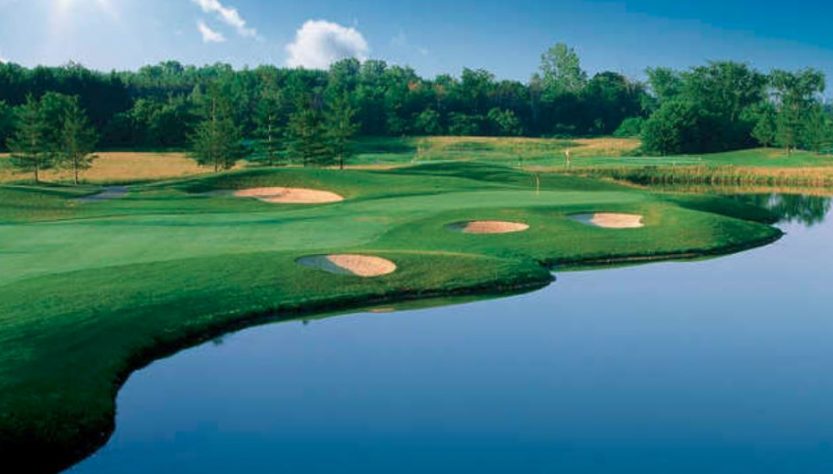 #15, a split fairway par five with the second shot for the adventurous golfer a full carry over a large lake.

#18 is a tough undulating par four with a menacing "out of bounds" to the left that is just waiting to destroy a quality round.

Five Best Features of This Course

Variable length from many sets of tees

Fantastic views of Fanshawe Lake and the dam

One of the best designed golf courses in London

I played in the official opening round for the Forest City National Golfer's Club in 1992. I played in a group that represented the London Public Utilities Commission who at that time were responsible for the current City of London public golf course system. Our team consisted of Fred Kern, the head professional at Thames Valley Golf Course, Mike Olizarevitch, the head professional at Fanshawe Golf Course, myself who was responsible for the maintenance of City Golf Courses and Bob Neskas, who was a recreation department administrator  in charge of Recreational Attractions and who the other three of us answered to. He was our boss. I don't remember too many specifics from that day but I do remember being impressed with the layout, the bent grass fairways and particularly the beautiful views of the lake and the dam. One memorable shot that I do remember from that day was one hit by Fred Kern. #16 is a sharp dogleg right that requires only good placement off the tee and length is of no advantage. Obviously we had never played the hole before and we were unsure of what club to hit off the tee or the proper line to hit it on. Fred hit an ugly smothered hook with an iron off to the left and he was so far back that he had to hit a long club toward the green. Fred was quite capable of inventing shots and as my memory serves me he hit a choke down faded 4 iron from the left rough off an upslope which miraculously found its way into the cup for an eagle two.

The only other vivid memory that I have of my first look at Forest City National was not that it wasn't a great course, which it is, but that it seemed that the course would not necessarily get better with time. I was so used to playing new parkland type courses with tiny trees and those type of courses would only mature and improve with the passage of time. Forest City was a done deal from the get go and the course you play today is amazingly exactly like the course you could play in the 1990's.

When I played at the official opening of Forest City National in 1992, the last thing on my mind was that this operation could ever be any kind of competition threat to the organization that I worked for which was the City of London Public Golf Course System. Forest City was professionally designed on a grand scale and the green fees at that time were projected to be double or triple the amount charged by local public golf courses. There was a reason for that. Bent grass fairways, big time bunkering and sand based greens required large maintenance budgets for irrigation, pesticides and the staff that goes along with that type of operation. For a few years that was the case but since 1992 the golf market in the London area has changed to become much more competitive. Many new courses opened in the 1990's. A golf course like Forest City was projected to have a $125.00 green fee similar to what high end golf cost in Toronto but at certain times today you can play Forest City for less money than public courses like Fanshawe.

Forest City Golfer's Club is a big time wedding venue in the City of London. Folks are still willing to pay big dollars to get married in an idyllic setting like the clubhouse at Forest City even though the statistical odds of a marriage lasting for more than 10 years is not all that great. A single wedding can generate revenue for a golf course that dwarfs the potential golf revenue for a single day.

If I was to take an out of town guest out for a round of golf in London, then I would probably choose Forest City National. I enjoy the design, the mixing of short and long holes, the secluded atmoshere, the airplanes flying overhead and the beautiful vistas of the Fanshawe Lake and dam. There is abundant wildlife on the course also probably due to the vast amount of land that it is built on. Difficult to land a drive on the wrong fairway at Forest City. Everything is in place for a successful golf operation and I have the feeling that the golf course will be around for years to come. Because the Conservation Authority owns the land it is extremely unlikely that houses will start popping up on any of the fairways anytime soon.