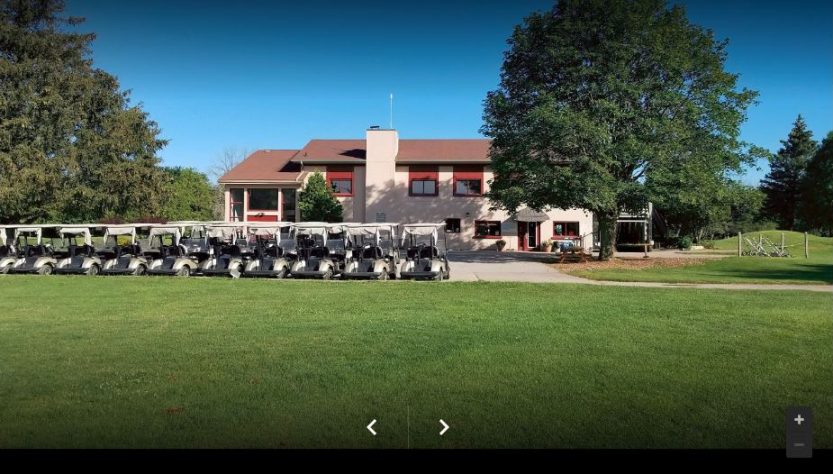 #5, O.B. to the right and tight around the green

1. Affordable, especially when paired with its sister courses, Westminster Trails and East Park

4. A loyal core group of members

Maple Ridge was the site of some big "Skins Games" back in the late 1970's. They were always on Wednesdays and there was a waiting list to get into the "Invitation Only" event.

In 1962, Angus Jaynes designed and built a nine hole golf course on Dundas Street east. At the time the location was a fairly long distance outside of the City limits. He called the course Maple Ridge and he became the sole owner and operator of the new golf course.

In 1964, my father and I decided to give the new course a try. Thames Valley and Fanshawe were really the only other options for public golfers at the time and both of those were very busy from dawn to dusk. I remember parts of the round at the fledgling Maple Ridge quite vividly, especially the third and fourth holes on the original nine hole layout. The third hole was a long par four with a boundary fence tight to the right side with lots of houses and trailers just over the fence. There was a good chance of a wayward drive ending up over there and out of bounds. The fourth hole was very unusual and I had never played anything quite like it before. The hole was a sharp dogleg to the right but the inside corner of the dogleg was private property with a few houses. Accordingly there was a substantial fence, quite close to the tee and it was very tempting to hit your drive over the fence to cut off as much distance as possible. Designwise this hole is most similar to the famous #17 at St. Andrews, the famous "Road Hole". There the best line and really the only good line off the tee is over the corner of a hotel, which is also out of bounds. It was unlikely that the homeowners along the fourth hole at Maple Ridge were going to approve of that strategy and this led to a few confrontational incidents involving the golfers, the homeowners and the ownership of the club. I always wanted to ask Angus Jaynes how he came up with that design but sometimes you have to do the best you can with the shape of the property that you have to work with. Efforts have been made over the years to mitigate the impact of the design of this hole.

Over the years Maple Ridge has produced more than its share of quality golfers and golf characters. In a way it reminds me of the disproportional number of good golfers that got their start at Fanshawe. Perhaps it was the relaxed atmosphere produced from being away from the City, the country atmosphere or the influence of Mike Kilkenny and Peter Hutchison that helped produce golfers with a passion for the game. Possibly the big money games on Wednesday drew good golfers to Maple Ridge.

In 1973, Maple Ridge expanded to 18 holes. Angus Jaynes again designed and built all of the new holes  and also reorganized the routing of the existing holes to best advantage. Some of the new holes at the west end of the property seemed wide open and a trifle dangerous but the young trees that were planted  thrived and some of those holes now seem very narrow.

On the first 18 hole layout the 18th hole was a long, difficult par three that ended a long way from the clubhouse. Eventually the course layout was altered slightly by the present owners and the 18th green now finishes closer to the clubhouse. 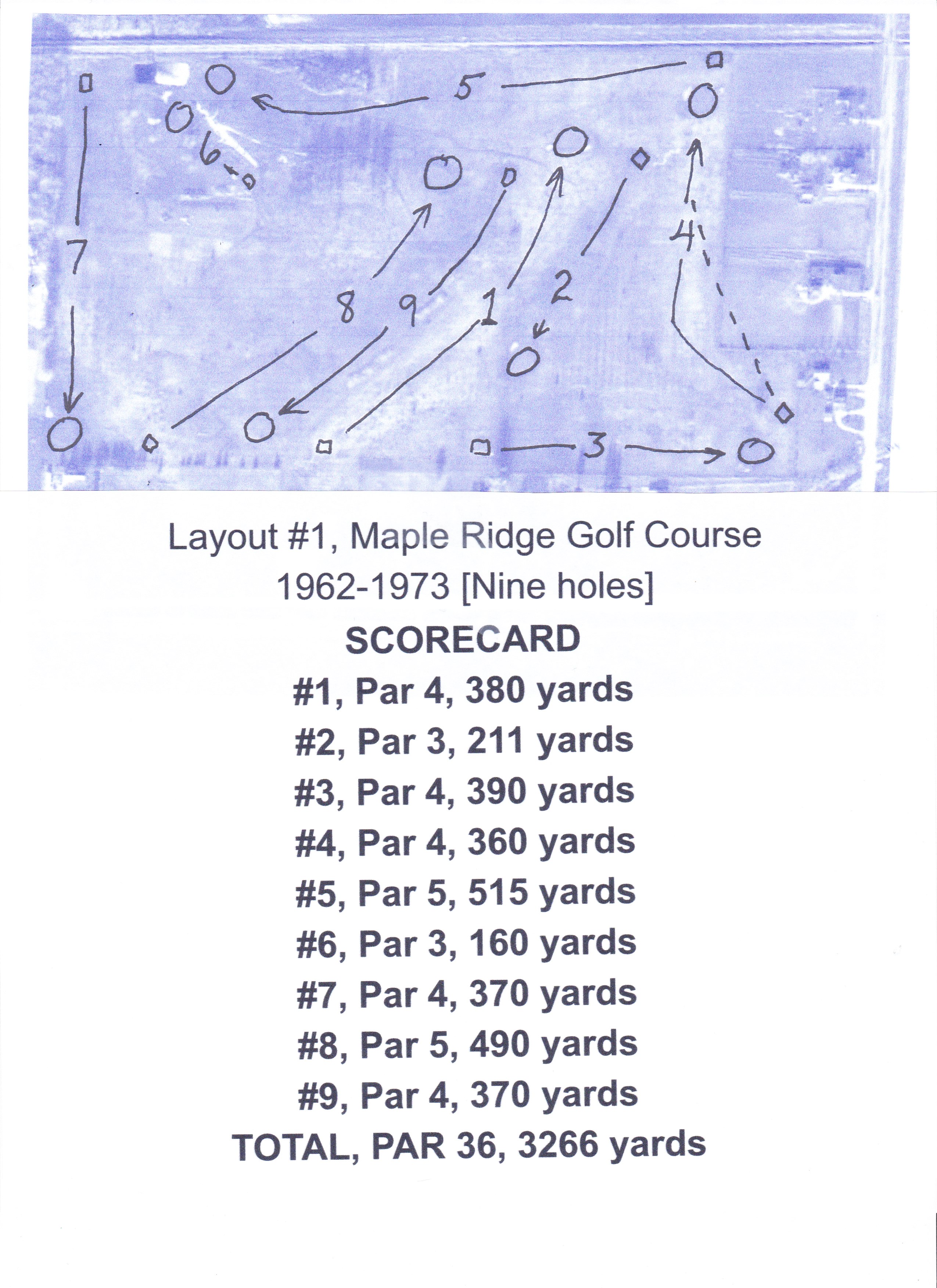 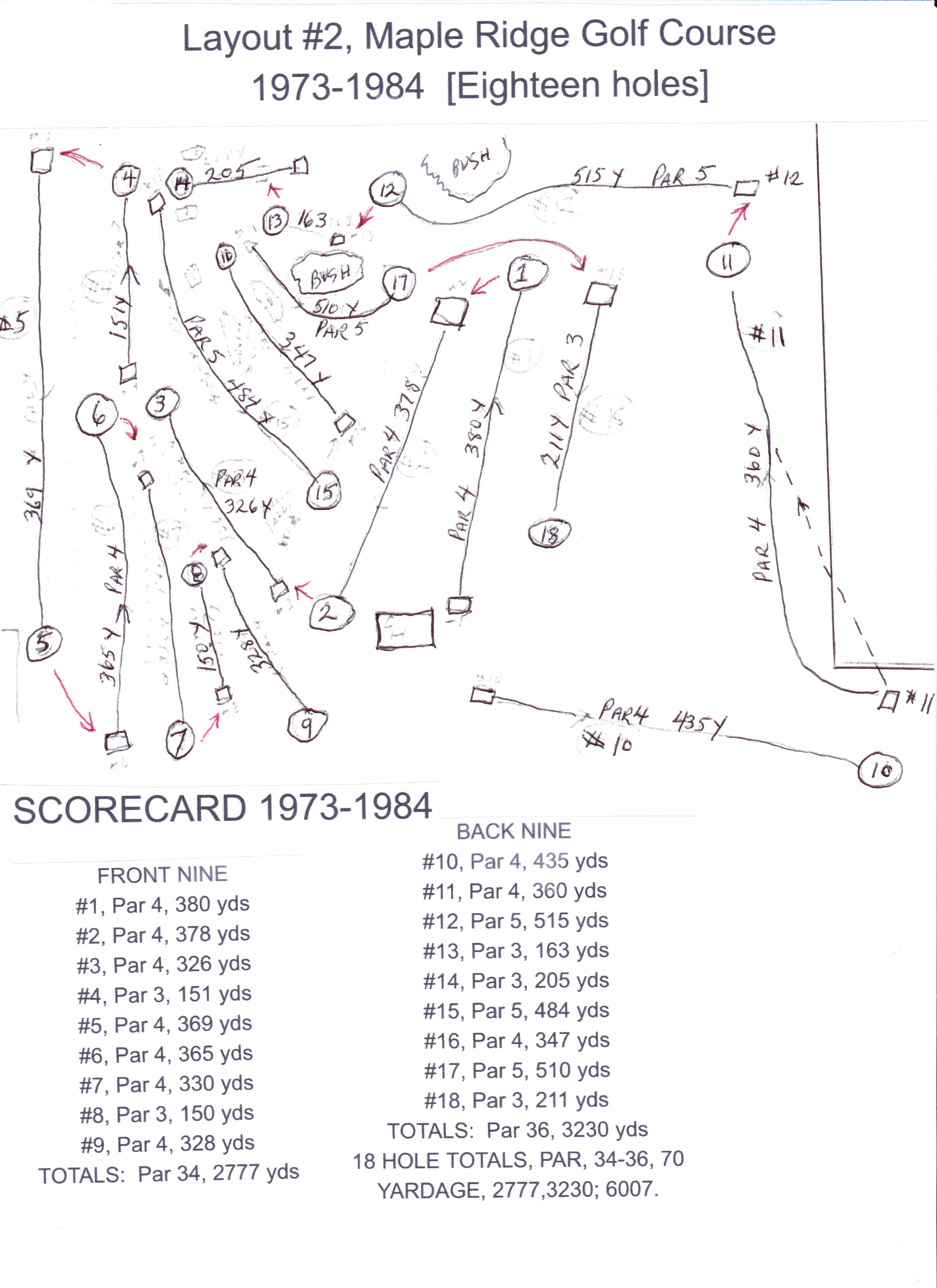 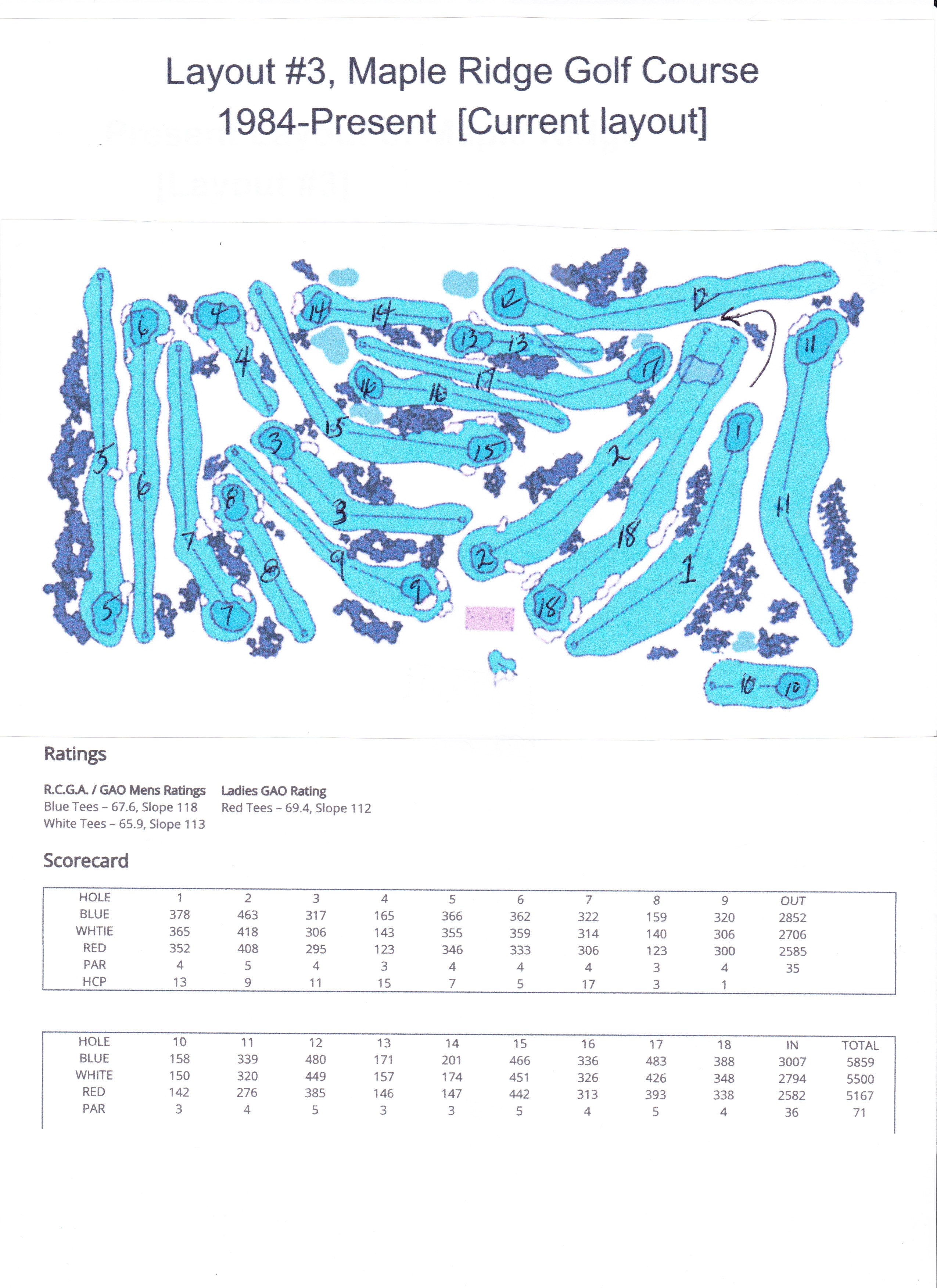 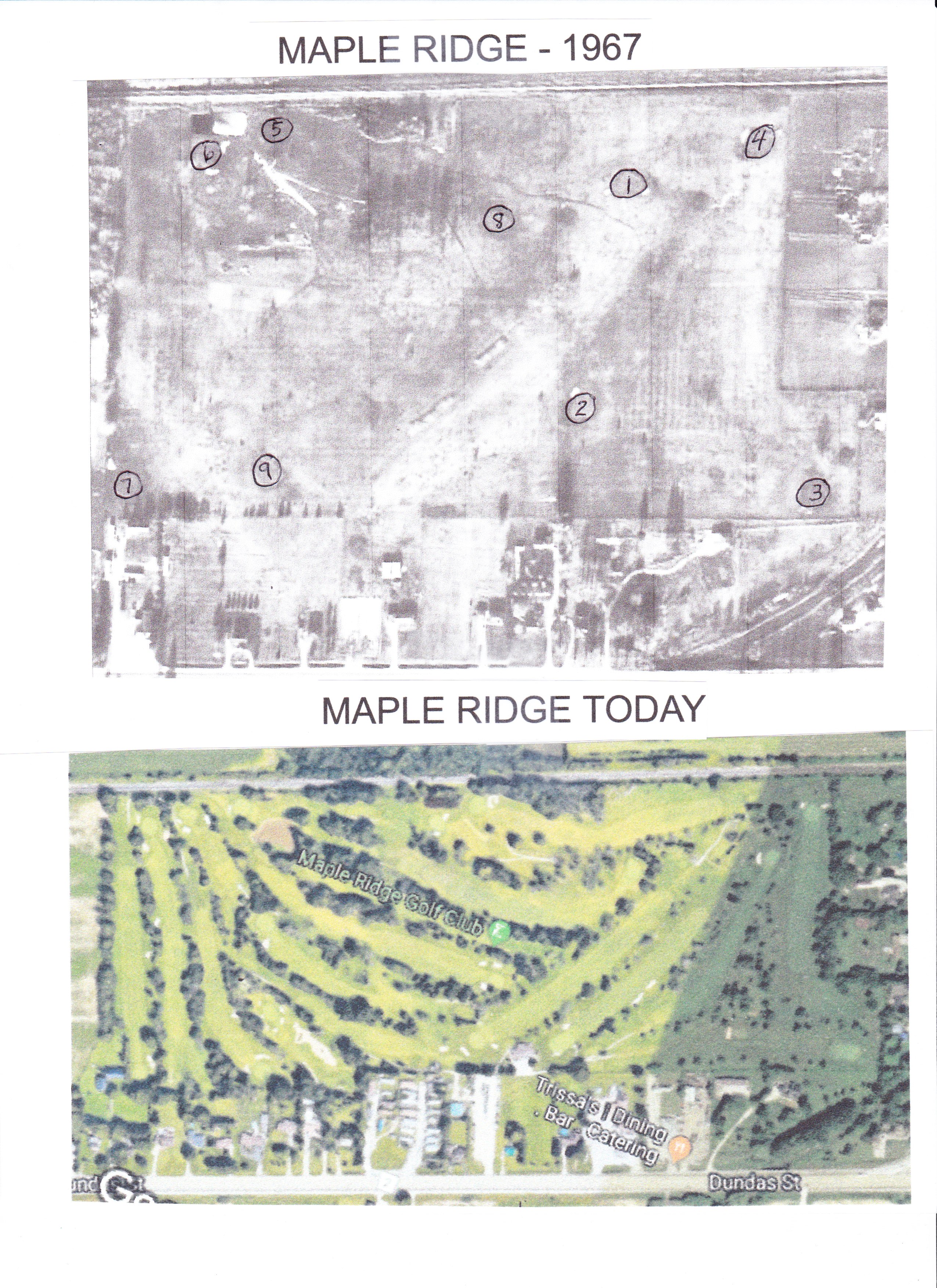 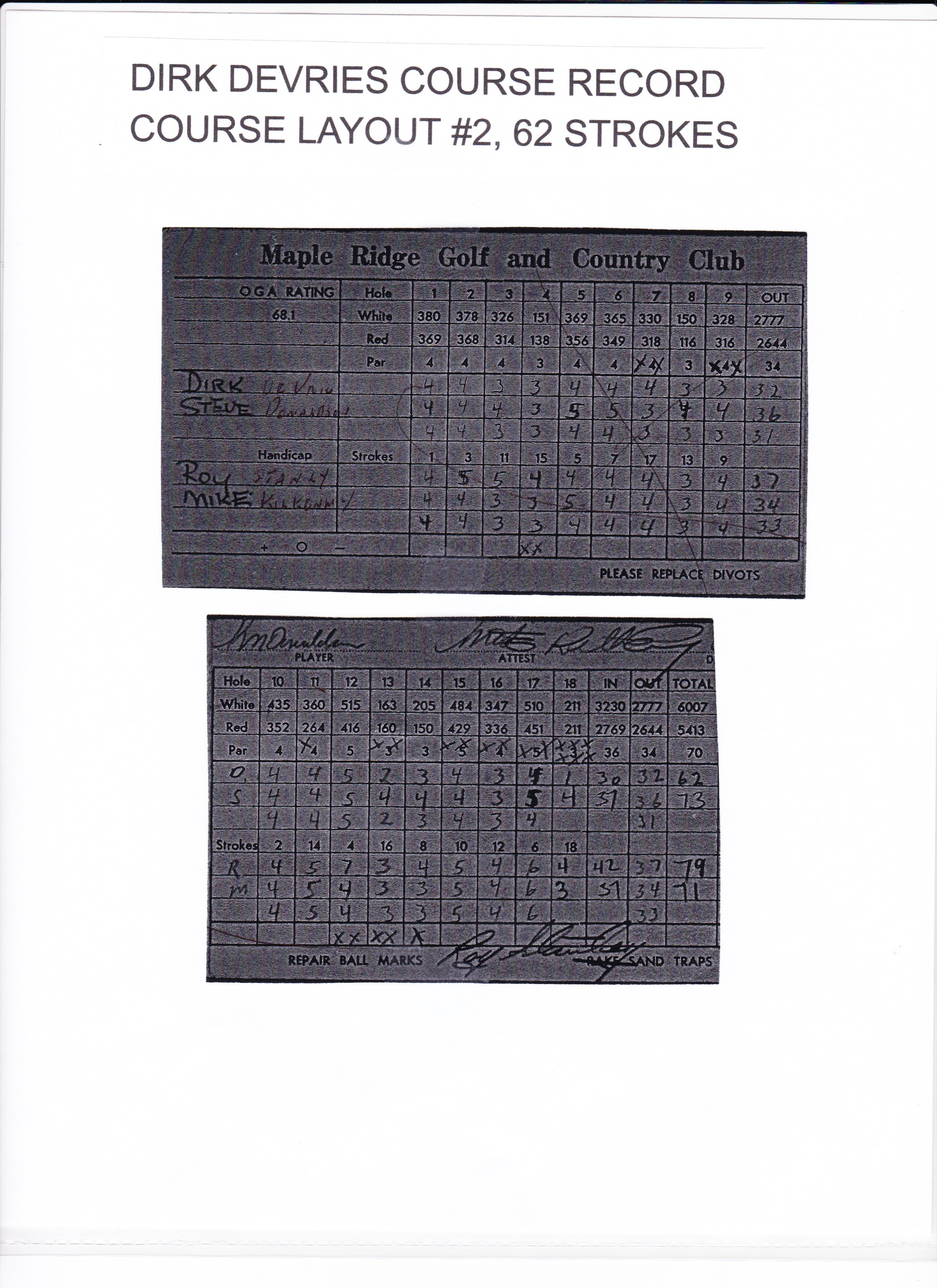 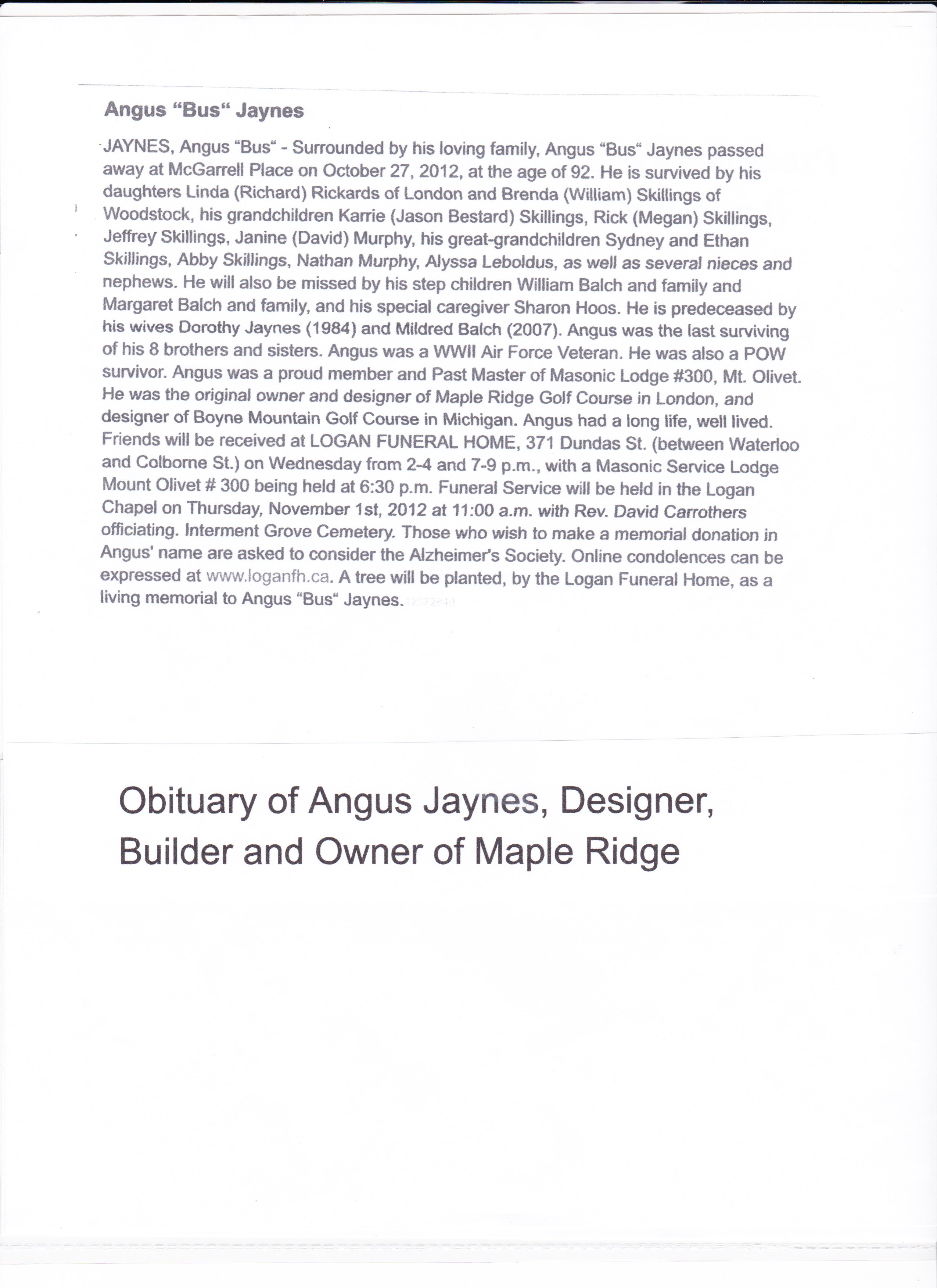 Maple Ridge has been around for over 50 years now and it is a solid enough operation so that it likely will remain as a public golf destination for years to come. As it now stands it is one of a triad of courses owned by Neil Kapp, Ian Stone and Alon Shantil. The strength of being part of this group has stood Maple Ridge in good stead businesswise and also added plenty of value for the members. It is nice for the members to have plenty of variety of courses to choose from and also have other options for play when the inevitable company tournaments take up their favorite course for a day.

A lot of interesting events have happened at Maple Ridge over the years. In the early 1970's a mini twister completely destroyed the modest original clubhouse although golf bags and trees nearby were hardly touched. Jeff Van Vliet used to win the Men's Invitational regularly but one year he won it while hitting three balls out of bounds on the tenth hole, scored a 10 and still managed to recover to shoot 72 and hoist the trophy yet again. Plenty of quality golfers have always graced the fairways at Maple Ridge.

In today's competitive golf landscape it is difficult for many golf operations to keep their head above water. The fact that Maple Ridge has survived the test of time for over 50 years speaks well to the future of this east end golf landmark. Hopefully it will still be going strong after 100 years.