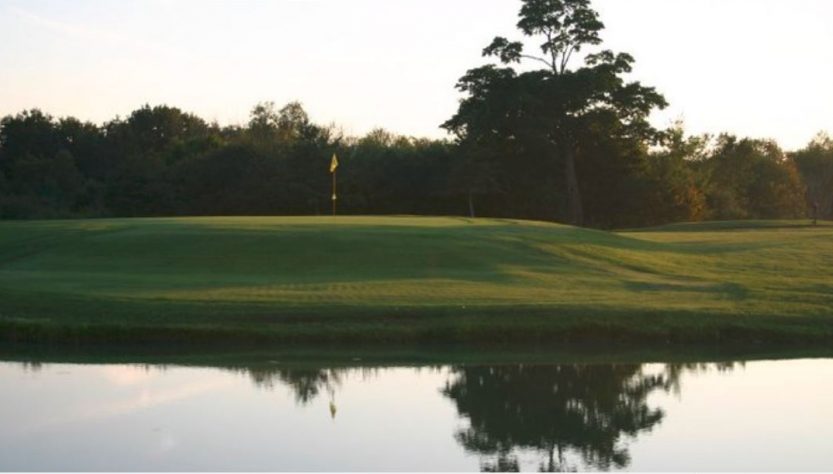 #2 is a short par 3 with an island green

FIVE BEST THINGS ABOUT THIS COURSE

Challenging when windy which is most of the time

Good value in combination with East Park and Maple Ridge

Westminster Trails is located on one of the highest points in the City which accounts for the fact that it is ususlly windy.

When Westminster Trails opened in 1990 the weather was challenging to say the least. The summers of 1987 [30 consecutive days of thirty degree plus temperatures] and 1988 had been super hot and dry. 1990 wasn't a lot better and most of the summer could have been classed as a drought. I went out to try the new course in its opening year and the problems encountered when trying to establish turf on this windswept site were very apparent. The irrigation pond was almost dry so most of the time the only areas to get watered were the greens and tees. The soil in this area to the south of London was a heavy topsoil. The turf growing on the claylike soil was sparse in many areas as is typical in new golf courses. Huge cracks formed in some areas of the rough and I can still remember finding a pulled tee shot on #2 trapped in one of the cracks. In some areas the cracks were wide enough to literally swallow up a golf ball. Over time the turf thickened up and Westminster Trails is now a well manicured golf course.

Lloyd Boughner was the original owner of this land and he farmed it before he got the idea to build a golf course on it. He knew every inch of the property including where every clay tile drainage line was located. Installing irrigation systems on heavy topsoil sites with established drainage systems can have some interesting challenges and outcomes when those drainlines are severed.

Brad Esler, currently the General Manager of Greenhills Golf Club operated by Clublink, got his first taste of golf course experience at Westminster Trails. He was just a youngster and was hired to pick rocks, use a rake and man a shovel during his first ever job.  Good way to start a career from the ground up.

Westminster Trails is coming up on its 30th anniversary soon so it has stood the test of time from the boom days of local golf when any course could make plenty of money, to the current scenario where every penny spent must be spent wisely. "The Trails" has a loyal membership base and an experienced, golf-oriented staff that should stand the course in good stead in the forseeable future.

It will be interesting to see what the future holds for this golf course. Will it revert to a stand alone golf course at some point in time or will it stay as part of the triad of courses owned and operated by Neil Kapp, Ian Stone and Alon Shantil? The advantages to the members of having the three courses grouped together are obvious. Because special deals on public golf courses abound due to operations like "Golf Now", golfers are less inclined to settle for the same 18 hole layout all year long as the only option for their membership. The variety offered by having "three courses for the price of one" is an important selling point to prospective members. Also the advantage for members of always having a place to play is a huge benefit. The golf courses can feel free to compete for large revenue full day company events, charity tournaments and weddings without impacting the opportunity to play golf for the loyal members. One of the key demographics of the current golf landscape is the group of recently retired or semi-retired seniors who suddenly have a lot of time on their hands. This group tends to play a lot of golf and a three course system is attractive to them.

My personal opinion is that Westminster Trails is better off in partnership with East Park and Maple Ridge  and it will remain a player in the local golf scene for public golf courses for a long time in the future.