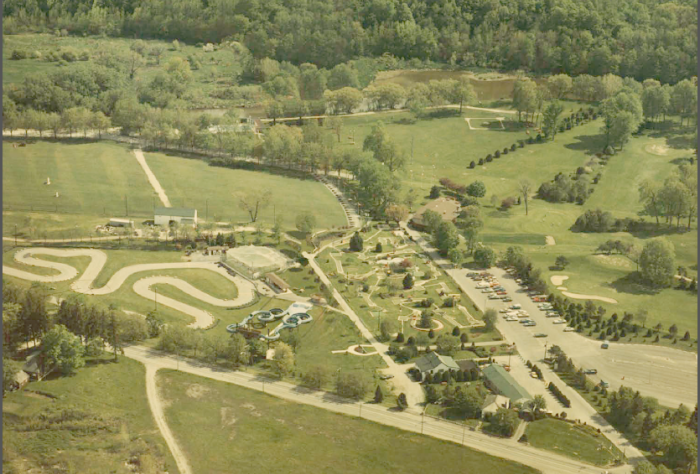 Early 1970’s East Park. No water slides yet but the go-cart track and Putt-R-Golf mini golf are in action. Think I can see the pool near the top and slightly to the left. The distinctive “V” shaped tree that Bob Martin used in his trick shot demonstrations is easily seen near the center of the photo.

Roy James, who was the driving force behind the establishment of East Park, was a well known builder of quality homes that would last. Even today a “Roy James House” is used as a selling point in London. The golf operation that he created has
also stood the test of time.

One of the greatest thrills for a kid growing up in London in the early 1960’s was to be invited to a birthday party at East Park Golf Gardens. There was so much to do. Even in 1963, its first year of operation, East Park offered a lot more than golf. There was an executive nine hole course available for play but also the best miniature golf course by far in the area awaited you plus a cool picnic area and a large swimming pool. I don’t believe the pool was heated so it was “refreshing” to say the least but on a hot day, it was nothing less than awesome. There were three batting cages with mechanical pitchers labelled “Fast”, “Medium” and “Slow”.

Nothing like this fun center had ever been built in London. Groundbreaking would be a good word to describe this operation but it was unique in many ways. The nine hole golf course was built on a reclaimed gravel pit and it won an award for the owners of East Park for the best rehabilitation of a gravel pit into a recreational area. The miniature golf course was on a scale never seen before and the par on one of the holes was “4” which spoke to the length and difficulty of the “Putt-R-Golf” course. A couple of holes went over the grass with a baseball style backstop behind the green so those fun holes were looked forward to by everyone. The marketing in the Pro Shop was different than  had been seen before and Bob Martin, who was seen as a trailblazer by many, was able to outfit golfers at a fraction of the cost compared to other options at the time. Bob dealt in volume sales. Bob Martin was also a trick shot artist which was largely a dying art at the time. He gave weekly demonstrations and I can still remember watching him for the first time. He hit balls out of a 7-Up cup, wedge shots off the patio stones, a putter off a tee through the forked trunks of the tree, a one bouncer off the 100 yard marker with a wedge, a low and rising driver and he could hit two balls at one time and they would cross in mid-flight. East Park had a range in 1963, something most public golf operations are still waiting for.

Personally, I felt totally at home at East Park. Roy James had built the home that I grew up in. He lived closeby. Roscoe James, his son, lived just up the street at the corner of Fanshawe Park Road and Stoneybrook and because he had a large yard, we played football on it. Roy James’ grandson was about my age and we played on the same minor hockey teams. There was nothing not to like about a trip to East Park.

In 1968, after an absence of many years, golf was reintroduced as a sport in the London High School Conference. East Park was the only club interested in hosting this type of event. I played on a two man team from A.B. Lucas in the spring of 1968 with Robbie Havers as my partner. The event was a success so that fall London Conference golf returned full time with four man teams and again it was hosted by East Park. For the next two years all London High School golf tournaments were also played at East Park. In 1968 the Junior Tyson Tour held its inaugural season. Bev Tyrell, golf writer from the London Free Press, was the driving force behind the establishment of the tour. East Park was one of only four courses played in that year and the first “Tyson Trophy” was won by Harold Kewley from the St. Thomas Public golf course. This year marks the 50th anniversary of the Tyson Tour.

Moe Norman was a frequent visitor to East Park and I can still remember being introduced to him by Phyllis McClean in the Pro Shop. Moe felt comfortable at East Park probably for two reasons. One was the staff and golfers that he felt comfortable with and the second was undoubtedly the presence of the driving range where he could pursue his passion for perfecting his swing. In the fall of 1968 Moe was giving a demonstration to 15 London Conference  High School golf teams of 4 players each from the first tee of East Park. Altogether there must have been at least 100 people watching including competitors, coaches and parents. The high school golfers watched in amazement as Moe rained down 5 irons on the first green at East Park. Every shot not only hit the green but they seemed to threaten the flagstick. Suddenly a coach and several players noticed that one had disappeared into the cup. The coach cried “you sunk it”. Moe’s response was typical and remembered by many as “just another good shot….just another good shot”.

East Park has an idyllic setting along the south branch of the Thames River and although golf has been a mainstay for the operation, the other components of the business have multiplied, become more diverse and added to the experience that customers have to choose from when they visit this east end landmark. 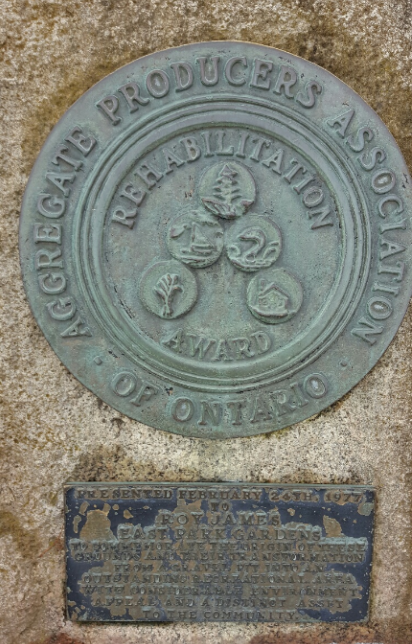 A fantastic award for East park to be recognized for turning an old gravel pit into a recreational area. First time that it happened in the London area.

Here is a close-up of the plaque which recognizes the man most responsible for the creation of East Park, Mr. Roy James. 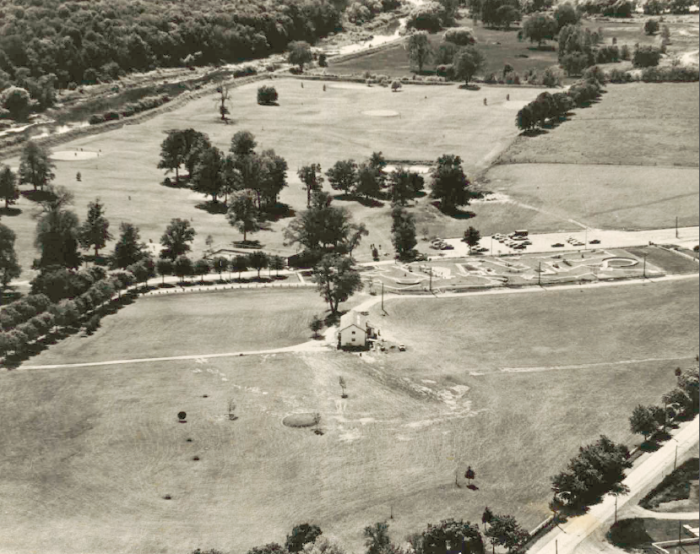 East Park in the opening year, 1963. “Bob Martin Tree”, barn, Putt-R-Golf and the pond is visible on #2 fairway. Pond is no longer there. Only 9 holes open at this point. 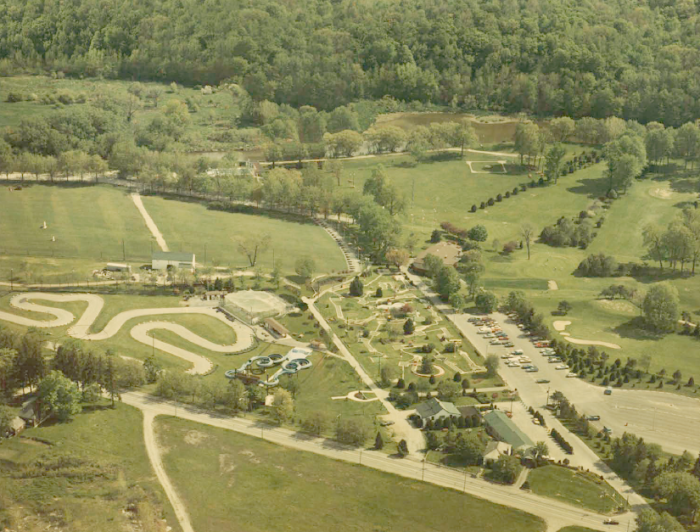 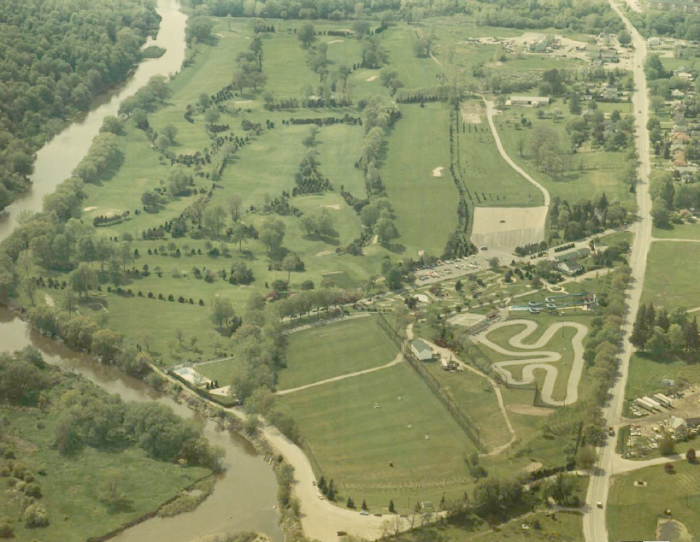 Beautiful shot of the pool, 18 hole golf course and the Thames River. 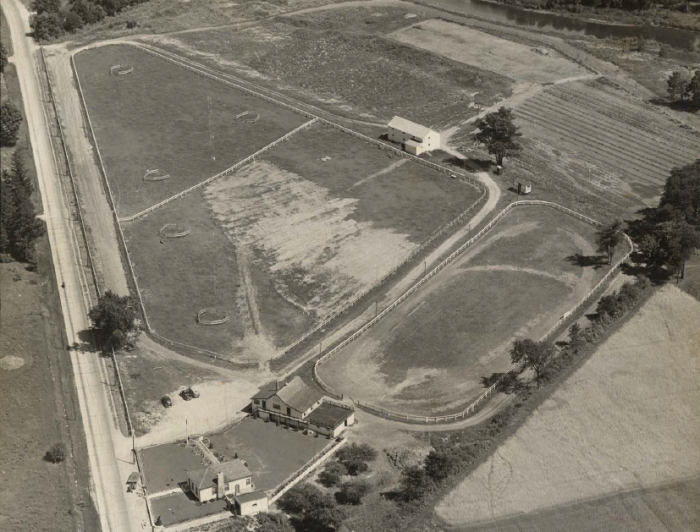 East Park before it was a golf course, 1950’s. I see the “Bob Martin Tree” and the iconic barn that has been hit with range balls a few times over the past half century. 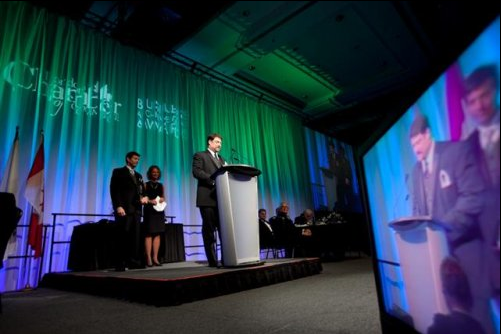 Another awards ceremony and more recognition for East Park.

Yet another award for East Park.

In addition to these awards, East Park received the “Heart Award” in 2015 for its efforts to go the extra mile to grow the game of golf and to be inclusive to everyone. 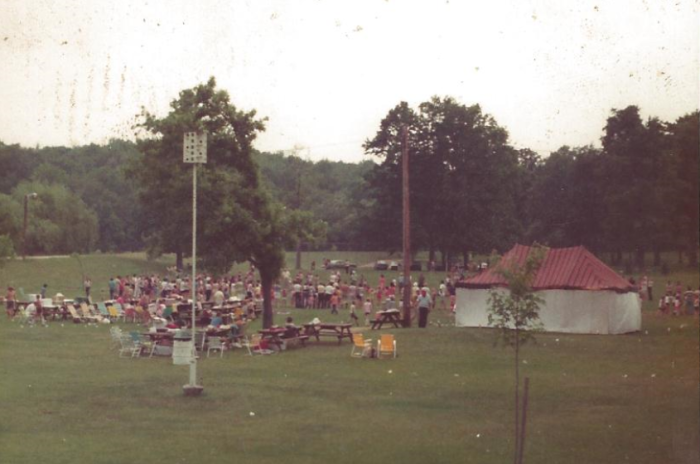 Picnics at East Park were fun for all ages. 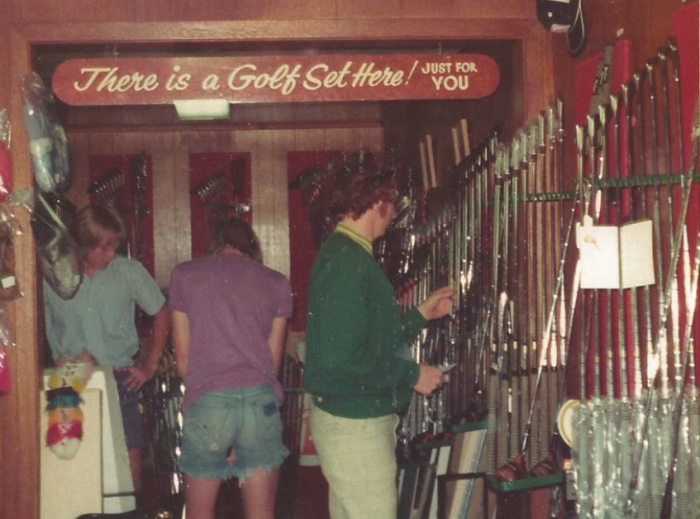 The East Park pro shop had a set of clubs for everyone. 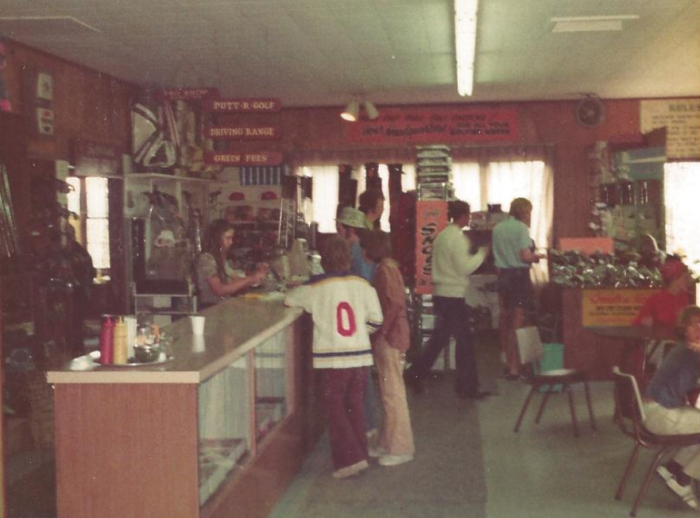 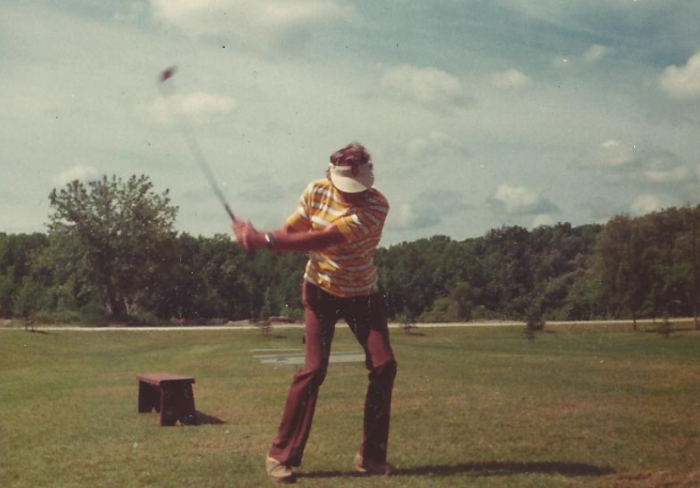 The driving range was always an important feature at East Park and was the site of Bob Martin’s weekly free golf demonstrations every Sunday evening.

Although he had plenty of financial backing from his friends and associates, the real reason that East Park exists today is because of the efforts and vision of Roy James. Roy was a house builder and a decent amateur golfer. From its earliest beginning in 1963, East Park was a golf course, but only a nine hole, par 29 “Executive” layout, and the other parts of this recreational attraction were at least as important to the business as the nine holer. There was a large pool, a picnic area, a baseball diamond, batting cages with mechanical pitchers, a driving range and an excellent miniature golf course that kids loved to play. Eventually the nine holes grew to 18 and the other parts of the operation came to include go-carts, waterslides, Intencity and other attractions. Most golf operations live and die by the quality and value of the golf course itself but that has never been the case at East Park. It has always been a recreation destination kind of enterprise with plenty of diversity to offer.

Roy James loved being out on the grounds at East Park, particularly the golf course. He would carry a screwdriver with him to fix ball marks on the greens as he wandered about on the property. I knew Roy and it was challenging to explain to fellow golfers about his actual role at the course. In addition to Roy James the other individual who made a lasting impression in the early years was Bob Martin. Bob was identified in the 1963 golf brochure as the golf “professional” but he was not a member of the Canadian Professional Golfers Association [C.P.G.A.] at the time. Bob would do anything to help the operation along and that included watering hundreds of new trees that were planted for the second nine holes in the mid-1960’s. Bob, of course, was always front and center with his free weekly trick shot demonstrations and his mass marketing approach to the sale of golf equipment had a profound effect on the local golf market for clubs, shoes, gloves and golf balls. Bob received the Heart Award in 2015 from “londonontariogolf.com” in honor of his efforts to grow and give back to the game.