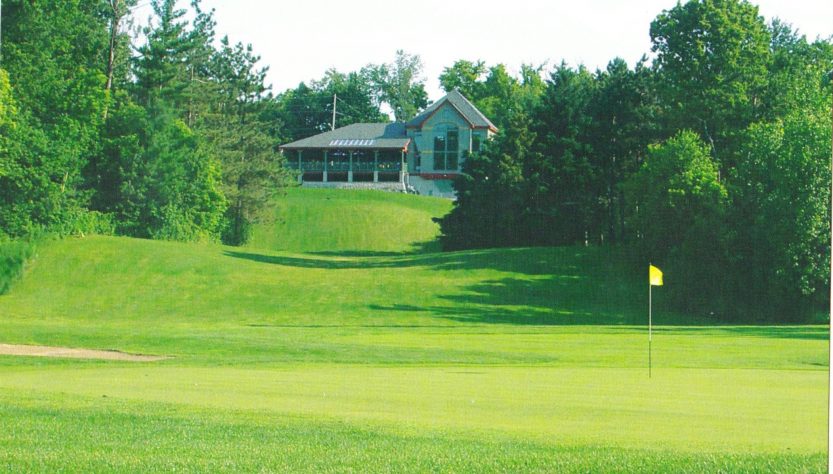 River Road Clubhouse looking at it from behind #10 green.

Huge ongoing development along Veteran’s Memorial Parkway means that, in time, River Road will have a prime location

The construction of River Road Golf Course was a product of a time in London when there weren’t enough public golf courses to meet the demand to play golf. The London Public Utilities Commission was the body responsible for recreation in the City of London and they were, by far, the biggest player in the public course market. At the time the PUC was operating two 27 hole layouts at Thames Valley and Fanshawe that were jammed to capacity and accordingly they were making money hand over fist. Tee times were hard to come by for the public player and 5.5 to 6 hour rounds were the norm rather than the exception.

In the mid-1980’s the PUC Master Plan for Recreation identified the need for a third public golf course somewhere in the south-east corner of the City. The city golf courses had always been self-sustaining and had never required tax money in order to operate. The golfers always paid their own way. The funds to buy land and construct Fanshawe had come from surpluses generated by the golfers at Thames Valley. For the construction of River Road the funds were going to come from surplus golfer’s fees from both Thames Valley and Fanshawe. Both those courses had been so successful that there was actually too much money in the kitty for the PUC’s comfort so the building of a new golf course seemed like a good fit at the time. Site selection proved to be difficult as three separate sites were rejected before the fourth site eventually became the location for the new course. River Road at its best is a challenging layout in a natural setting and paid for only with golfers fees. It is no secret that River Road has struggled from time to time and I’m sure several chapters have yet to be written. 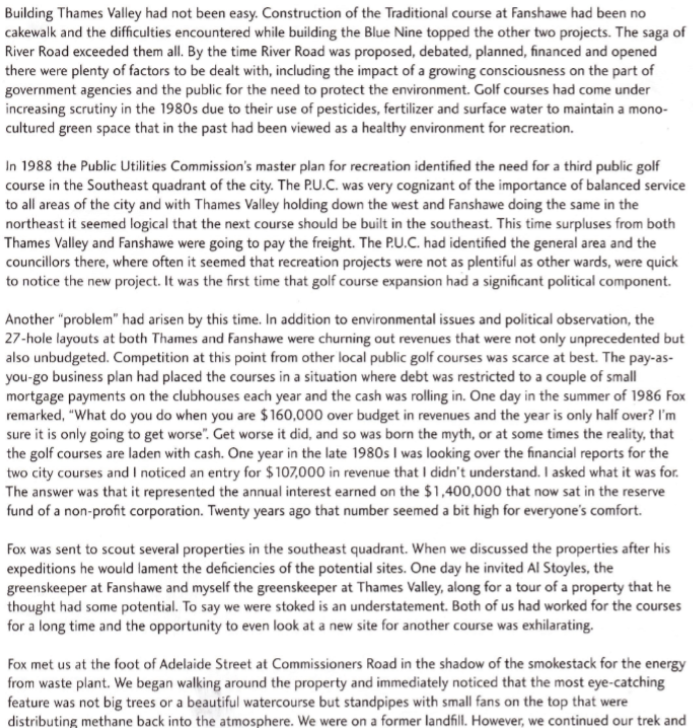 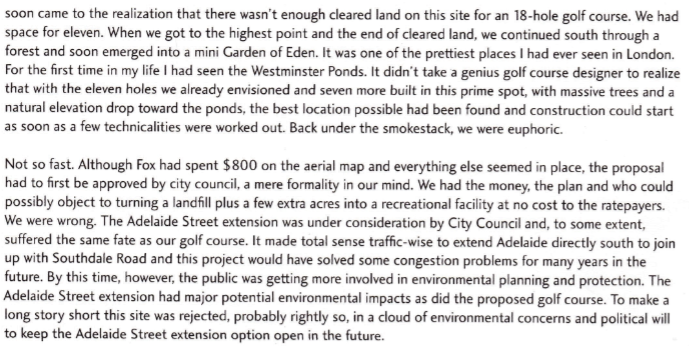 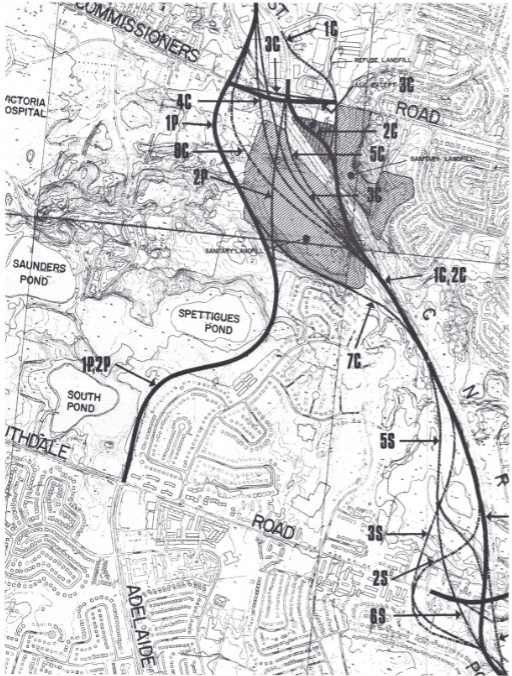 These were the two possible routes for the Adelaide Street extension. Unfortunately both ran right through the initial proposed site of the new golf course in the south-east section of the City. The “preferred route” presented by City staff was the curvy black line on the left that joined up directly with Adelaide Street South. The other route followed the railway “right of way” and had less of an environmental impact on a beautiful area although the end result was not as favorable for traffic patterns. 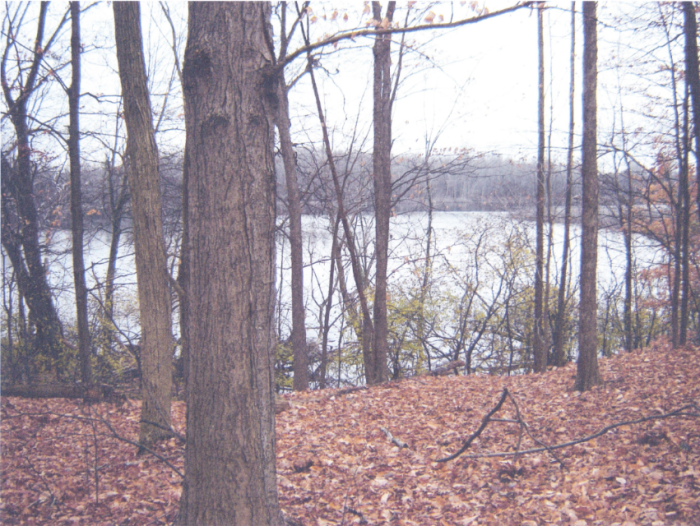 Views like this got Bill Fox, Al Stoyles and myself excited about building a golf course on the first proposed site close to the Westminster Ponds. 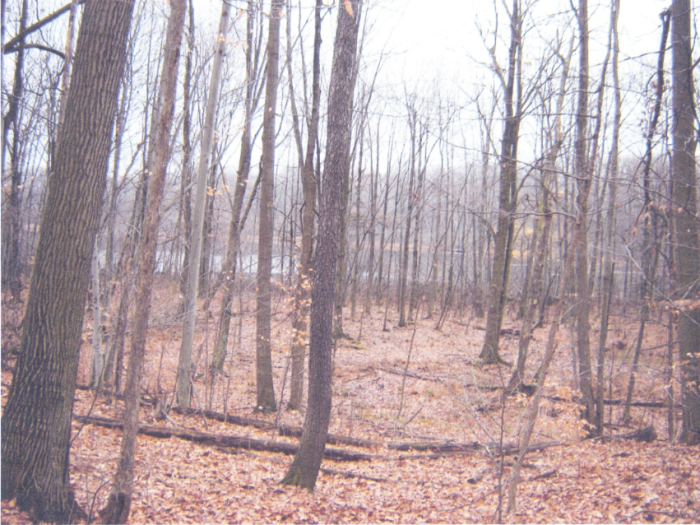 Another beautiful view. Would have made a fine golf course.

After the Adelaide Street/Westminster Ponds golf course site was rejected, this was the next site that Bill Fox, Al Stoyles and myself were sent out to evaluate. Proposed site #2 was the old “Park Farm” and had been donated to the City for passive recreation. The similarities of this property donation and the Elsie Perrin Williams property donation are hard to ignore. The Park Farm was not large enough for 18 holes so the land stretching up towards toward Commissioners Road would have had to have been purchased. Because the Environmentalists had no interest in Park Farm becoming a golf course, this site was rejected also and the required extra land became soccer pitches and baseball diamonds……….as you can easily see. Quite close to East Park across the river.

The third site evaluated by Bill Fox, Al Stoyles and myself was this promising property of 124.48 acres at the address of 2004 Hamilton Road, on the northwest corner of Hamilton Road and Veterans Memorial Parkway. It was the perfect size and as you can see, heavily wooded. It also featured a three car garage which would have been ideal for the maintenance equipment and a decent sized house that could have been easily renovated into a modest clubhouse. It had a good irrigation water source, the south branch of the Thames River and electrical power was closeby. The London Public Utilities Commission however could not purchase land without the express consent of City Council. The asking price for this prime spot was totally in line for use as a golf course but a bit too high for the liking of the City. This site again was rejected over a couple of hundred thousand dollars which in terms of the long range success of a golf operation, represents nothing more than a drop in the bucket. 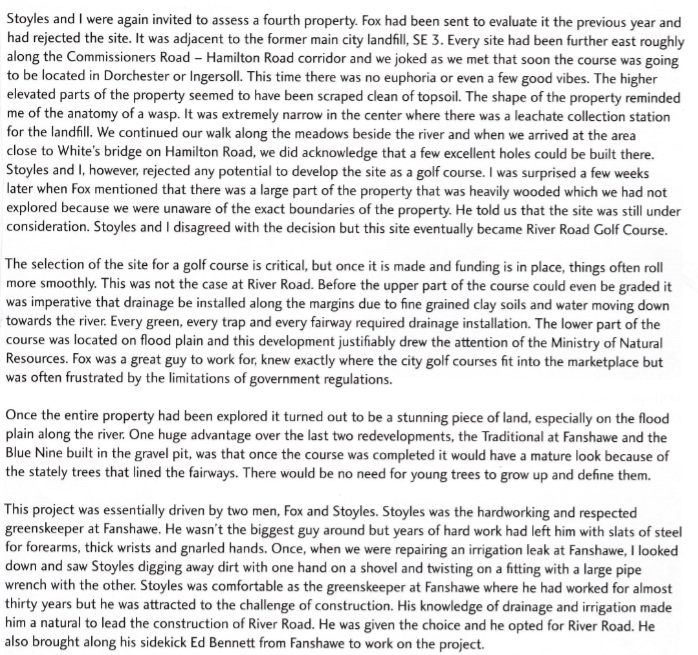 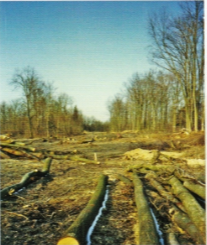 The view at River Road golf course from the tee toward the green on #5 hole during construction. I am not sure even this picture does justice to how narrow this hole was when the course first opened. To make matters worse the fairway sloped hard from right to left. Only an extremely low fade had any chance of staying on the short grass. 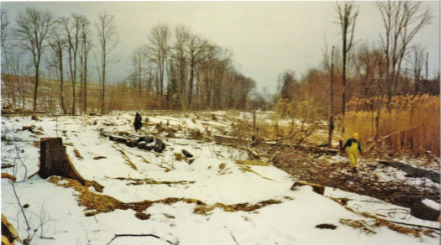 This is the view during construction of #5 from the green looking back toward the tee. Just for reference, the large oak that stood alone on the right side of the fairway for many years [before in blew over in a storm] is clearly visible near the center of the photo. At this point it is not even close to the edge of the bushline, much less standing alone. 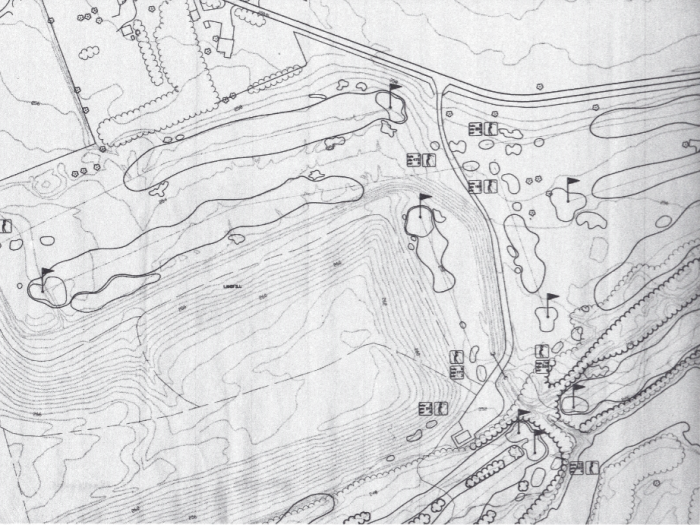 This photograph and the one directly below it prove what has always been a hot topic of conversation at River Road. These original plans for River Road show the tee for #5 clearly being built almost halfway up the hill. If the tee had been built there and the tree clearing proceeded accordingly then it would have gone a long way to solving congestion issues in the future. 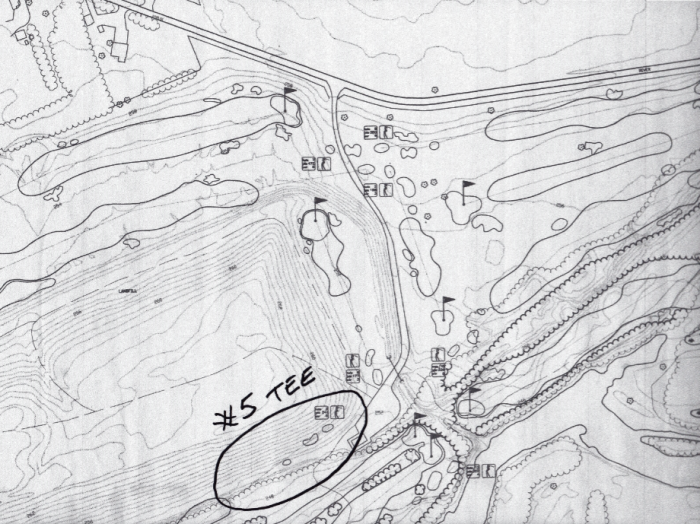 This contour map shows the tee for #5 about one third of the way up the hill. 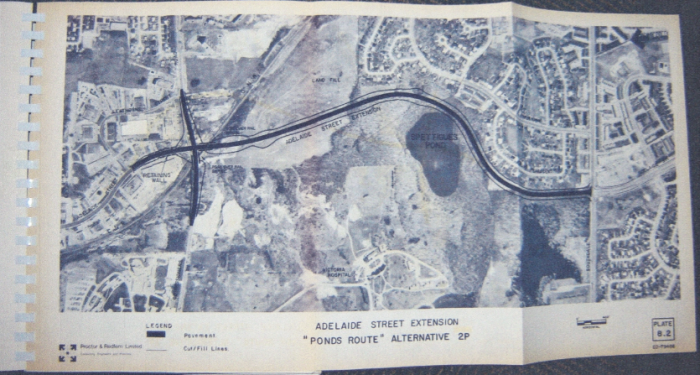 This was the “preferred” route for the Adelaide Street extension but both possible routes [including the one following the railway right of way] were not possible if course layout #1 became a reality. The other route followed the railway right of way but it met up with Southdale road far to the east of the preferred route. The railway route  did not impact sensitive environmentally significant lands as much as the “preferred route” did. Neither route was completed and it is unlikely that either one will ever be built. 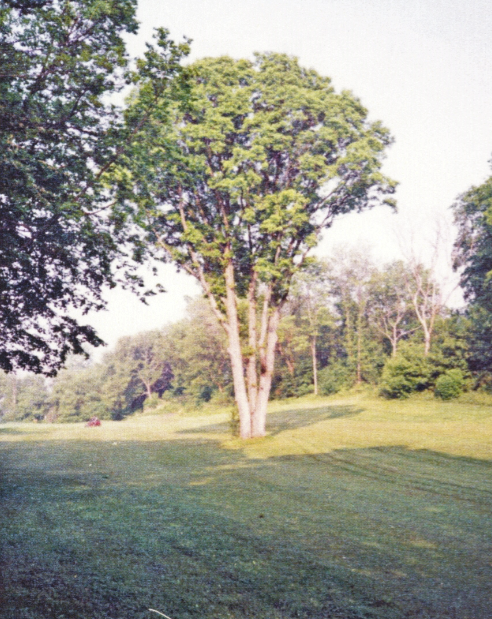 The controversial tree in the geometric center of #11 fairway at River Road. Nice tree but…… 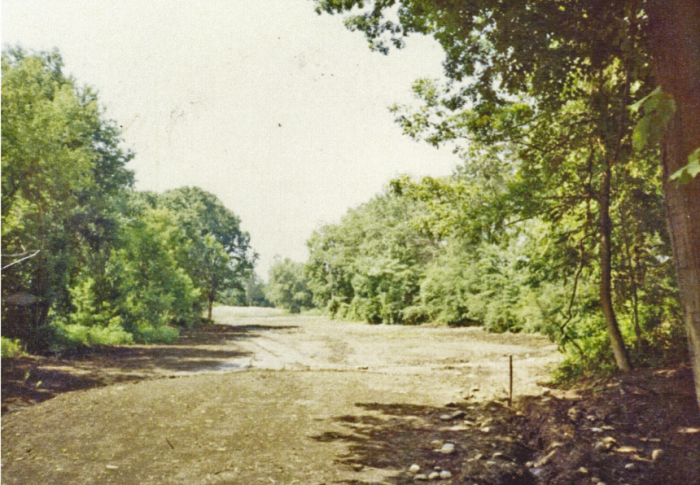 This is the view of #12 just after it has been seeded. When the course opened for play on August 6, 1993 this photo is a good representation of what the golfers faced. Tough tee shot….severe penalties for a poor one. Plenty of spare golf balls required. 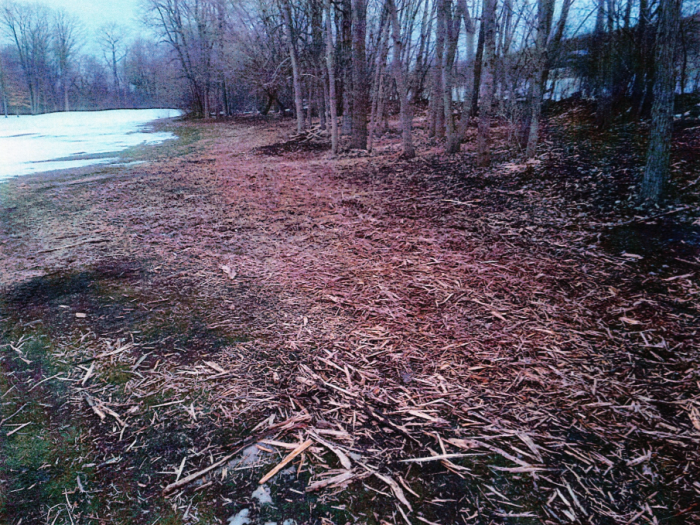 Clearing underbrush at River Road not only makes the course more playable but highlights the beautiful trees that abound on the property. 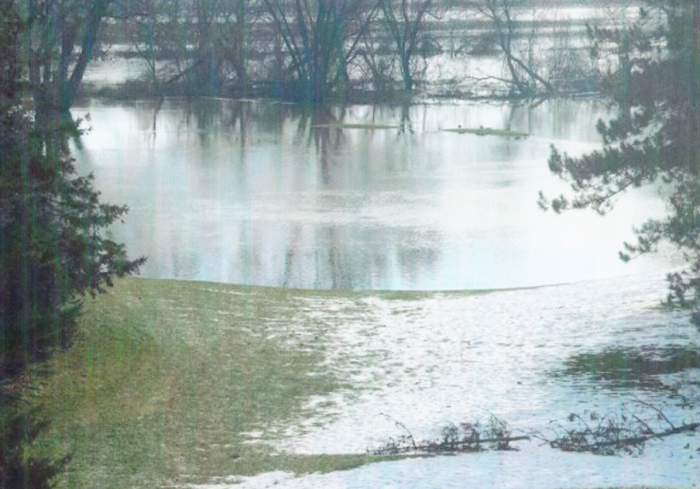 #10 green during full flood. A few geese find a resting spot on the mounds behind the green. 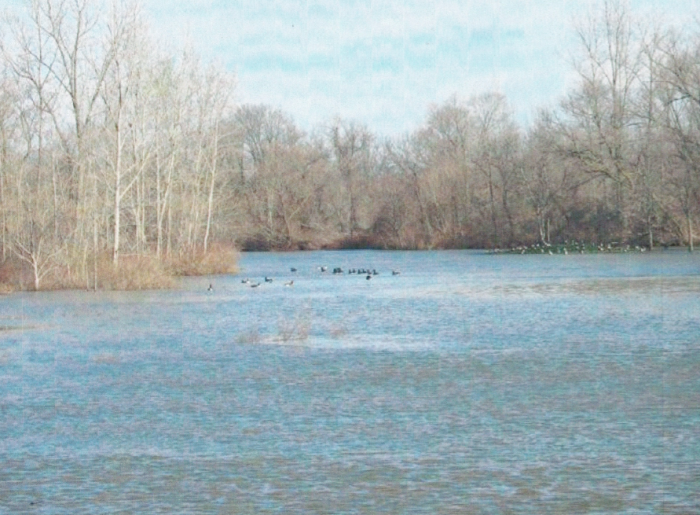 #13 and #14 fairways under flood conditions. When the water recedes these floodplain holes dry up quickly. 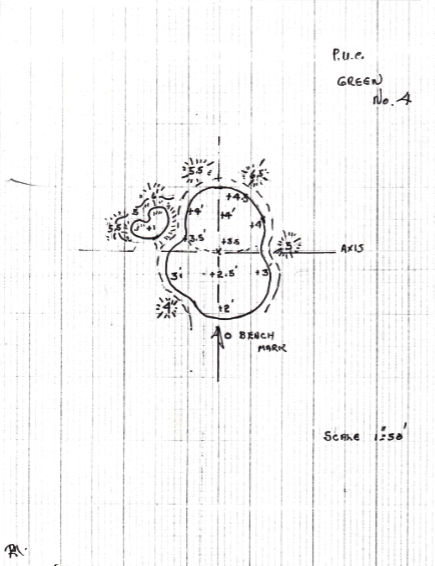 River Road is a Rene Muylaert golf course as evidenced by his initials on the lower left corner of this greensite diagram. Green for #4 as the course was designed but #6 today. 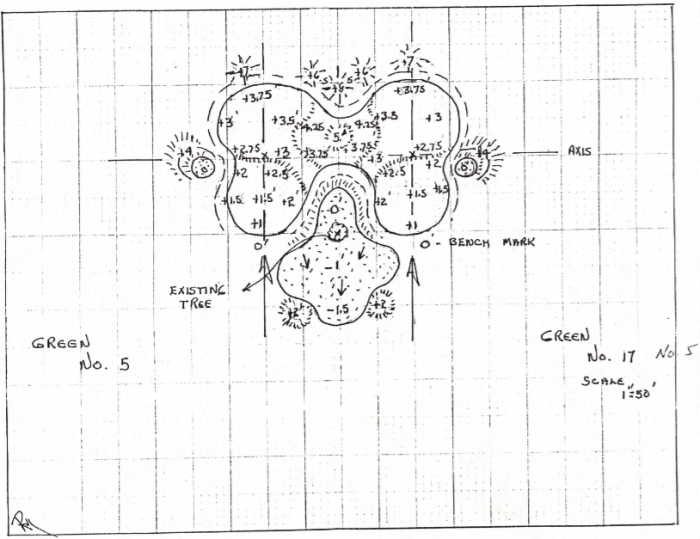 The double green design, #7 and #17. Originally #7 was #5. The two pot bunkers on either side were removed in 1996. Lots of prime pin placements for the “Course From Hell”. Plenty of discussion over the years as to whether this “double green”, trendy in the day, was a good idea. If the tee for #5 could have been built halfway up the hill as designed by Rene and construction of that hole could have proceeded accordingly……..and this double green could have been two single greens with maximum separation, then a lot of problems could have been avoided. 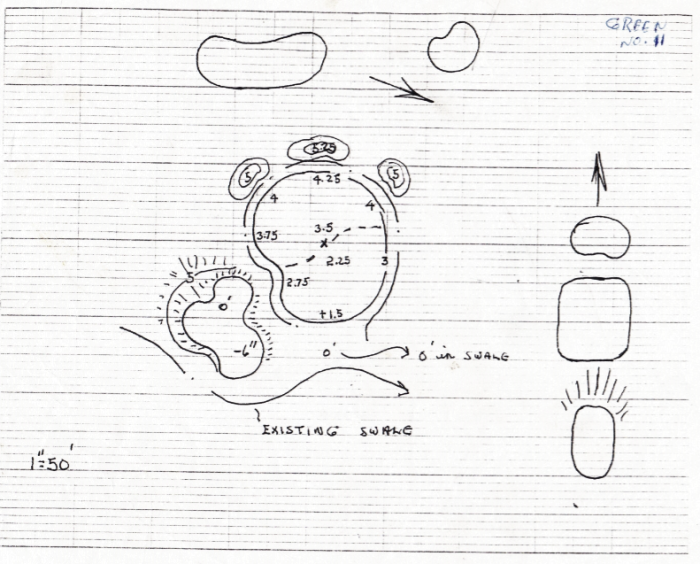 Original greensite diagram for #11. The bunker was removed during sewer pipeline construction in 1995-1996 and was never rebuilt. Not sure what happened to the design compared to what actually got built. Safe to say that what we play today is more challenging. The gentle two-tiered green on the diagram bears little resemblance to the “bowled effect” on the lower left corner of the actual green today. Not very many fair pin positions presently. Perhaps the bulldozer operator had an off day. 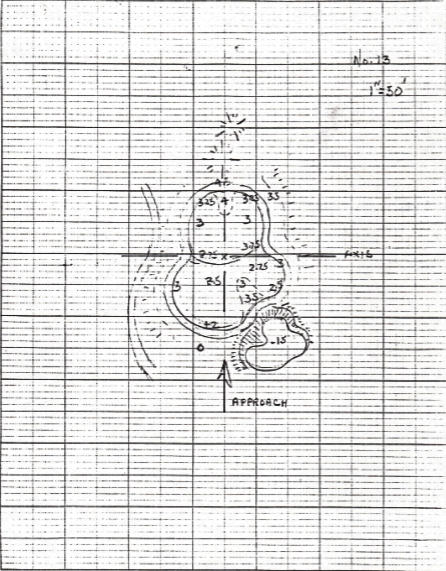 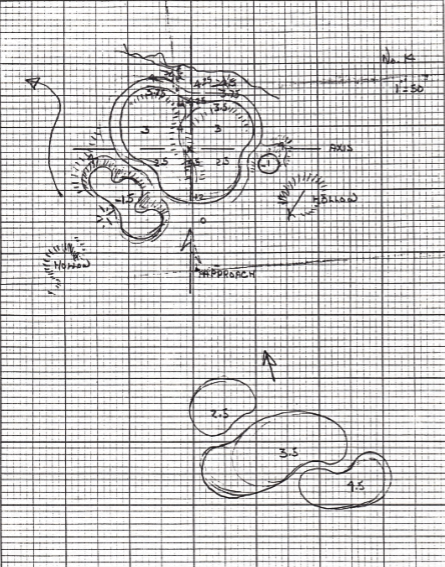 A lot of effort went into the construction of original #14. Easily one of the best greens but not in use anymore. 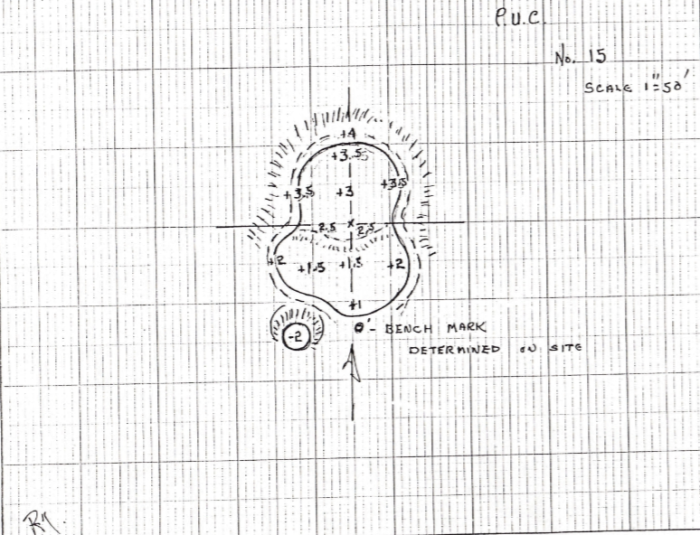 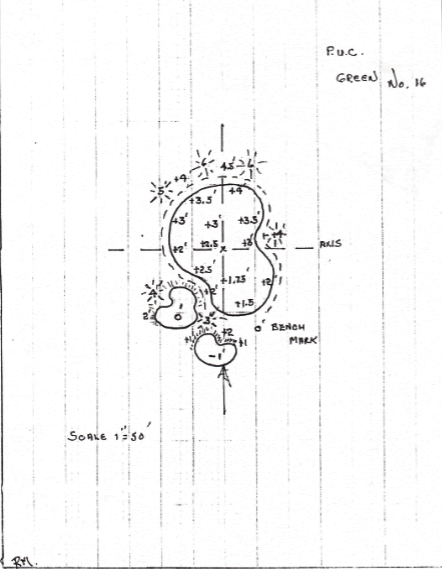 #16, built to plan. Overhanging oaks must not have read the plan……tough to get to the left side today.

I didn’t make the final decision regarding the site selection for River Road. I was, however, certainly involved in the process. You can play Monday morning quarterback regarding the site selection of River Road.  I remain positive about the project and in the long run the decision of the former London P.U.C. to use surplus funds created by Fanshawe and Thames Valley to build a third public golf course in the south-east section of the City, will be proven to be the right one.

One fact should be made clear. River Road is a Rene Muylaert designed golf course. Rene was paid a fee per hole for his design work. His initials are on the greensite diagrams. The grading and fairway bunker designs are unmistakably his. His son operated the shaping bulldozer.  Bill Fox Sr. was responsible to the London Public Utilities Commission for the end result and he was the on-site supervisor for the construction. Bill had day to day control of construction and was a full partner with Rene on design issues. Bill and Rene worked as a team to build River Road.

River Road has some weaknesses but its challenge and natural beauty has created a loyal following of golfers who occasionally look at other parts of the system as boring. River Road is not boring. Many of the holes are nothing short of great. I have always said that if River Road was the only public course operated by the City of London, then it would be a poor choice. However when you look at it as a part of the entire system then it adds plenty of value. When it hasn’t rained in three weeks then River Road is often the best City course to play. In the future with the development along the Veteran’s Memorial Parkway, River Road will have a prime location. Actually I have always maintained that River Road has a prime location because its beauty provides a stark contrast to the industrial area surrounding it.

Twenty years from now folks might look back at all the controversy surrounding River Road and ask “What were you thinking”.