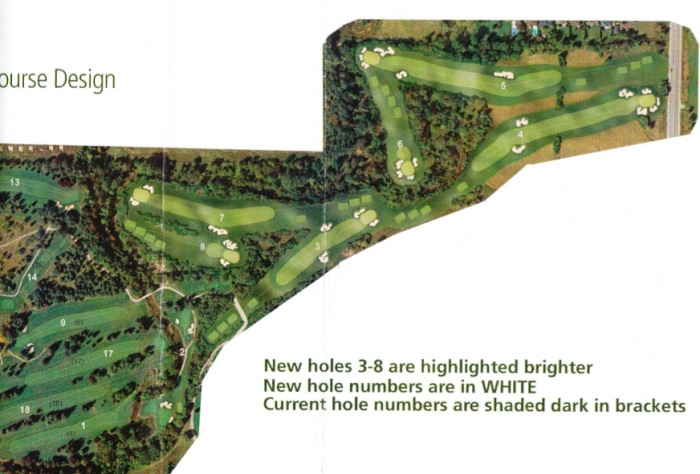 The course layouts at Sunningdale have stayed remarkably stable over the past 45 years although major improvements have been made in the areas of irrigation, bunkers and a new Clubhouse. The impact of the changes once the holes are abandoned
south of Sunningdale Road and the new ones are constructed to the
northeast, will be interesting to watch.

About the Sunningdale 36 Hole Layout, 1971-present

I can easily sum up Sunningdale’s current layout of 36 holes. Great golf. Great golf for the last 45 years. No area club can match the variety and quality of the two excellent layouts. The new clubhouse was a necessity but the commitment to provide state of the art automatic irrigation was just as important to the long term success of the course as one of the best in Canada. At one time in the past Sunningdale’s level of course maintenance was higher than a public course but not among the elite private courses. That is not the case anymore.

Sunningdale is the only course in the area that can come close to Thames Valley for the number of major changes over the years. Until I got involved in this project, I had no idea. Sunningdale opened in 1934 as a nine hole course and three of the holes were located along the Medway creek to the north and east of the present #5 green and #6 tee of the Thompson course. The next year the course had 18 holes and those three were still in play. Because of a steep uphill slope that proved too much for even the hardiest golfer to walk the three “Medway Creek” holes were abandoned soon after they were built. The next 18 hole course was easier to walk. By 1960 Sunningdale had 27 holes including the Front Nine, the Back Nine and the West Nine, designed by Clinton “Robbie” Robinson. Another big time redesign by Robinson gave the club the layout that it enjoys today starting in 1971. In the future it is no secret that Sunningdale is looking to come full circle, abandon the holes on the south side of Sunningdale Road in favor of returning to its roots along the Medway creek north and east of present #5 green and #6 tee on the Thompson course. Awesome property for a golf course and I am sure the members will be happy with the result.

In the mid-1970’s Sunningdale decided to use both courses of its new 36 hole layout for the annual Sunningdale Masters Invitational. At the time the Thompson course was much more highly regarded than the newer Robinson course. I was talking after to clubmate Cliff Brown who had played the Robinson that day after I had played the Thompson. He said, after a tough windswept day on the links, “ I think we played the tougher course today”. I thought he was crazy but the next day I played the windy Robinson and it was indeed tougher. Every time I visit the Turf Maintenance Center at Sunningdale I am reminded of what a huge golf operation Sunningdale is. Future looks bright.

In the past I have heard criticism of the design of the first two holes of the Thompson course at Sunningdale as being too bland. I am not sure that I agree with this because I still think that the best start to a golf course is a medium length par four with a generous fairway. The Thompson course certainly has that and in fact it has two such holes to get you warmed up and into the game. That is all about to change. The planned new Thompson-Carrick course will start on current #4 hole instead and the back tee will be located on a cliff far above the fairway. This spectacular tee shot will create excitement right from the get-go. The rest of the routing of the holes is shown here. The six new holes are located on beautiful property and I can’t wait for them to be completed and in play. 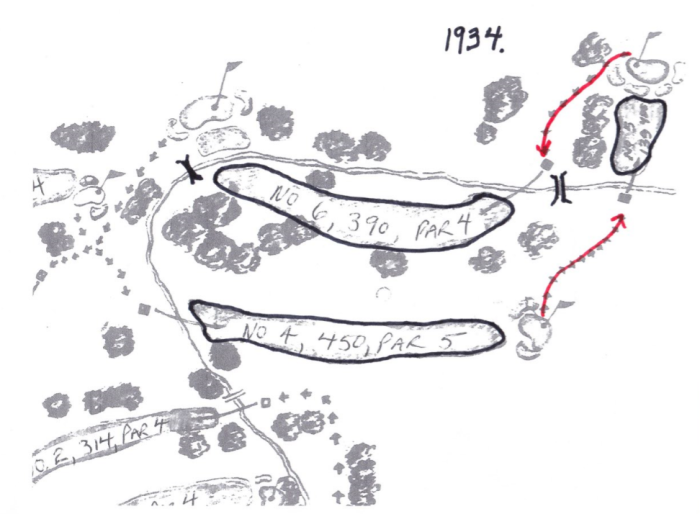 This diagram from 1934 shows the three holes that were constructed on the same site as the six new holes although the six new holes extend much further east toward Richmond Street. The 1934 holes crossed the Medway Creek in several places requiring the construction of bridges. The new design uses the creek for a hazard but the holes do not cross it. Good decision. 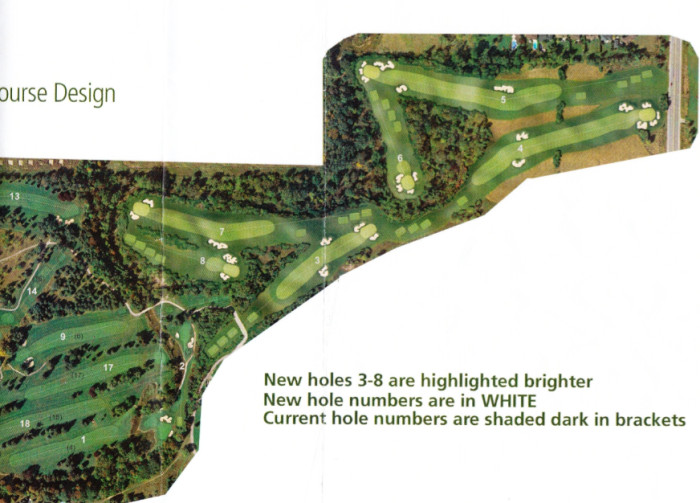 The members at Sunningdale won’t have to wait long to see the six new holes along the Medway Creek. Current #4 is the first hole and current #5 is the second. The six new holes are #3 to #8. Should be exciting for everyone involved. 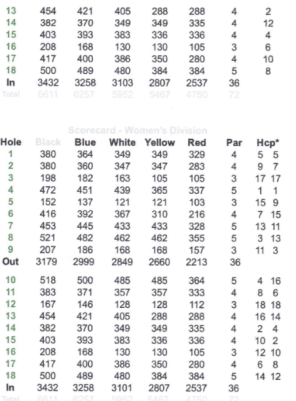 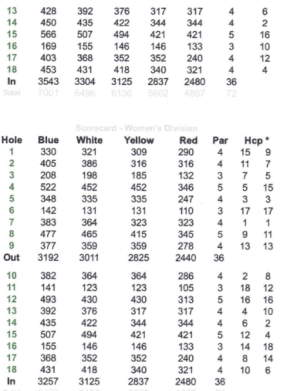 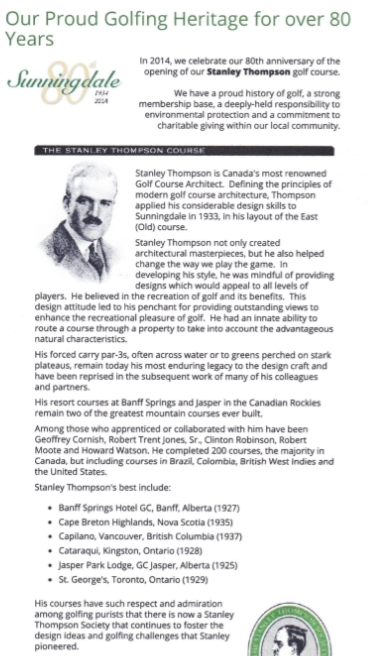 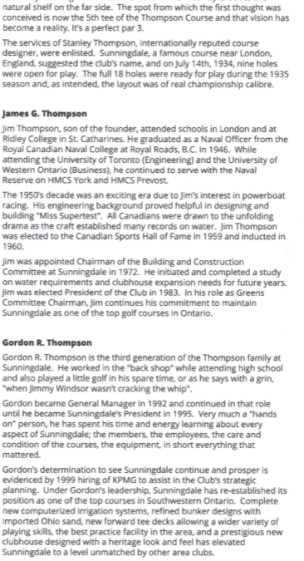 I just can’t find much to criticize about the two golf courses at Sunningdale. Maybe they both do start off with a couple of blandish par 4’s But I actually like that type of start. It tends to get the pace of play moving along steadily and fast paced rounds have been a hallmark of Sunningdale for as long as I can remember. Difficult or penal holes are rarely a good start for a golf course.

There actually isn’t a single hole at Sunningdale that I do not like or that seems to be there only to move you on to the next hole. Both courses have great variety, water hazards, plenty of space, elevation changes and basically everything you would look for when choosing a property to build a golf course. The maintenance level of Sunningdale has been elevated in the past decade and the irrigation system is state of the art…….something that couldn’t have been said years ago when crawling sprinklers roamed the fairways.

One of the things I always liked about Sunningdale was that it always was a family owned and operated business. Until I started this project, I had forgotten about the great career of J. Gordon Thompson, the variety and scope of his business, the exploits of Miss Supertest and his vision to build his course on plenty of land and far outside the city limits. Looks like the City is chasing his family out there now. Obviously subsequent family members are carrying on the tradition and improving golf at Sunningdale.

Hard to believe that Sunningdale has kept basically the same layout for 45 years. That is about to change with the construction of six new holes to replace the six holes on the south side of Sunningdale Road. The outcome of that project will be interesting to watch in years to come.

Oops!  Big changes in the future. Story emerged today, May 16, 2017 that Sunningdale will become just an 18 hole course by 2022. The existing Robinson course will be reduced to 12 holes for the four “Transition Years” from 2019 until 2022. Floodplain land = golf course. Non floodplain land = houses. A bit disappointing personally. I am sure many long term members will have opinions.