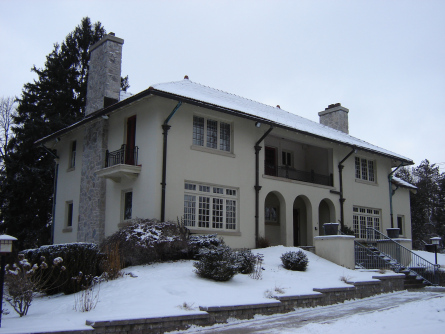 By far the best clubhouse of all the courses we can’t play anymore and perhaps all of the courses period, belongs to the Elsie Perrin Williams Estate.

Elsie Perrin Williams until 1934.
Willed to the City of London 1935-present

None, but John Innes from Thames Valley was a frequent visitor

Unknown but maintenance personnel had use of the beautiful gate house

Stunning property bordered by the Medway creek
Unique, beautiful clubhouse
Nice neighbourhood – check out the houses in the area
Owners alone decided who was allowed to play golf there
Few complaints from the golfers….and those were likely ignored

Elsie Perrin Williams was the only child of nationally renowned biscuit and candy manufacturer, Daniel Simmons Perrin. Daniel Perrin’s factory was located on the north side of Dundas Street where the Bell Canada building is presently situated. Needless to say Perrin was very wealthy and he used a 68 acre site called “Windermere” as a summer residence. His daughter, Elsie, spent plenty of time in her youth at the beautiful summer home with expansive grounds and a breathtaking view of the Medway Creek Valley. In 1903 Daniel Perrin presented Windermere to his daughter, Elsie, as a wedding present for her forthcoming marriage to Dr. Hadley Williams, a prominent London surgeon at Victoria hospital. I am sure that Hadley was well off and it is hard to believe that the couple suffered any kind of financial difficulties. Elsie’s fortune dwarfed that of Dr. Hadley Williams.

When Elsie and Hadley married in 1905 they made the 68 acre site along with the Victorian house on it, their permanent home. Elsie was a student of architecture and in 1916 she replaced the Victorian house with the current Spanish Colonial Revival house. On her frequent trips to California and Florida she had learned to admire many of the features of Spanish architecture and she incorporated many of them into the design of her [and Hadley’s] house.

Both of the Williams’ loved golf. Elsie played widely all over the world in pursuit of her passion for the game. Hadley’s love of the game caused him to become intrigued with golf course architecture. He became a good friend of John Innes and he was a frequent visitor to Thames Valley during the construction of the holes cut with hand saws and blasted with dynamite through the dense bush there. In fact he became so enamoured with the project that eventually he left a small mark on the final result at Thames Valley. Plasticine had been developed around 1900 in England and it had proven to have many uses, not the least of which was a children’s toy. Hadley had an idea as to how today’s 11th hole should look, including the green so he went back to Windermere and made a plasticine model of the hole and presented it to John Innes the next day. Innes decided to accept the input of his friend and for the next several decades the short 11th at Thames Valley was referred to as the “Dr. Hadley Williams Hole”. Before Pat Ward retired in 1983 he would still occasionally bewilder a young worker and send him out to work on the “Hadley Williams Hole”. The original green was quite small with a distinct saucer shape with two traps in front. The present trap on the right is original and still in play and the second smaller trap can still be seen between the two present day bunkers. The original small, sloped green was flattened in 1969 and makes up the right side of the present putting surface. Everything back and to the left of that was added later.

It has been mentioned that the Williams’ were founding members of Thames Valley Golf Course, which they were. In fact however, the first register of members for the 1924 and 1925 seasons contained the name of virtually every prominent Londoner including Sir Adam Beck, C. Ross Somerville and a host of others who dutifully made their way to Thames Valley to support London’s first public golf course with a $10.00 yearly membership.

Dr. Hadley and Elsie Perrin Williams constructed a golf course on their large property at Windermere. At this point we are trying to figure out if it was a four hole or a nine hole course. We have heard both. Dr. Hadley Williams was able to fulfill his dream of designing and constructing his own golf course for the use of just he and his wife and whoever else they invited to play. John Innes undoubtedly showed up occasionally to see how things were going. It is difficult to believe that the course was operational for very long. Hadley Williams died in 1932 and Elsie died in 1934. Their housekeeper Harriet Corbett lived in the house until she passed away in 1979. Tough to believe that Harriet would have been interested in a golf course in the back yard. After Hadley died in 1932, Elsie changed her will to leave the entire property of Windermere to the City of London along with an endowment of over one million dollars to maintain the property forever. The one million would be equivalent to fourteen million in today’s dollars. She only lived another two years. At that point the city was looking around for cash for some capital projects and used Elsie’s money instead to build a wing on Victoria Hospital and a new Public Library. Good uses for sure but hardly her wishes…..plus the City gained 68 of the most beautiful acres available in London plus two awesome houses. There should be a monument to Elsie Perrin Williams somewhere in the city.

We are trying to find out the layout of the course or at least how many holes there were. The more I look at it there seems to be enough room for nine. This aerial was taken in 1942 and the parts of the course on both the east and west edges have already started to overgrow. The trees that were planted to define the fairways are very obvious and in the mid-1990’s it was easy to see several of the greens and tees. Naturalization of this public parkland now makes it difficult to imagine that there was ever a golf course on this site. Windermere Road is at the top right and the  beautiful clubhouse can be seen in the grove of trees. 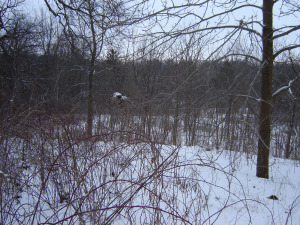 It seems logical that the flat area just below the house with a fantastic view of the Medway creek valley, was the #1 tee. 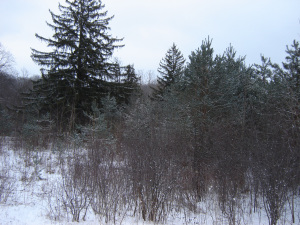 This green site at the extreme southern edge of the property and against the Medway creek, is totally overgrown. 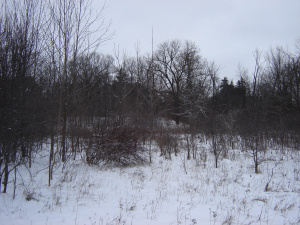 One of the fairways today. 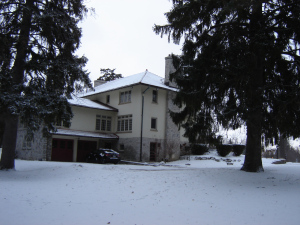 Even the back view of the clubhouse is awesome……especially when framed by two of the magnificent spruce trees that grow on the property.

I find the story of the golf course and indeed the story of the entire property at the Elsie Perrin Williams Estate somewhat bittersweet. Elsie was born into money and privilege but clearly she was a brilliant woman who understood design, architecture and had a burning passion for the game of golf. Never a bad thing. She was also a civic minded individual and her gifts to the City in the form of 68 of the most breathtaking acres perched above the Medway Creek, two houses and the equivalent of 14 million dollars to maintain her property forever were substantial to say the least. Everything should have turned out fantastic or at least great.

Instead the City of London, voracious for some Capital money, invested the help of the Provincial Government to break Elsie’s will and use it for two other worthy causes. They built a new Central Library and chiseled her name on the facade in 1940. Presently the facade and foyer of the beautiful building have been designated for Heritage preservation but the fate of the remainder of the building is in limbo. A new Central Library opened on a different site in August, 2002. An addition to Victoria Hospital was also constructed with Elsie’s money, which was a fine use of it, but now the wrecking ball has leveled that property. Somewhat ironically the only things that have endured are Elsie’s house and property at 101 Windermere Road. Her golf course is long overgrown. Her vision of her gift to the City of London has been ignored. Her contribution has been largely forgotten. Her million dollar endowment fund is long gone.