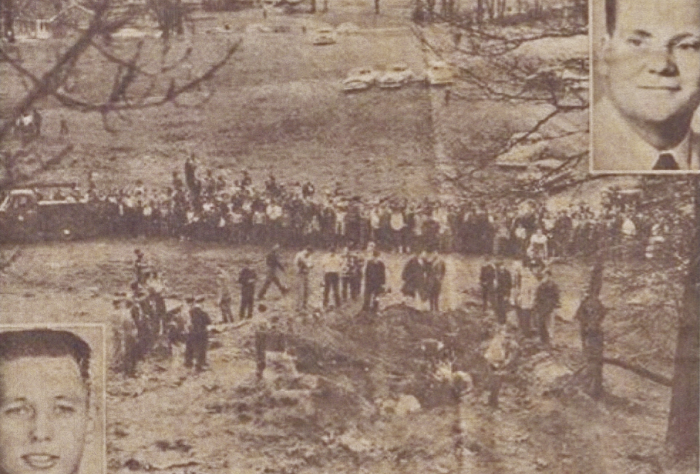 Some of the aftermath following the crash of a jet aircraft on the former Fairmont Golf Course in early April, 1955.

No significant golf tournaments but the biggest event by far was a jet aircraft crash on the property on April 2, 1955, soon after the golf course closed.

The opening of Fairmont in the early 1930’s as London’s second public golf course accomplished the goal of providing an east end golfing opportunity for Londoners. Interestingly the next annual report from Thames Valley noted a drop off in play and blamed the opening of another competing course in the east end with “more to offer”

Hey folks, need help on this one. While doing research on Thames Valley years ago we ran into some information that there was a public golf course operation in east London during the 1930’s, 1940’s and 1950’s. None of us knew anything about it but former long term Fanshawe member Harold Parker did, and he quickly came up with the correct name……Fairmont Golf Course. It actually served as competition for Thames Valley during the Great Depression and the manager of Thames Valley used “competition from other courses with more to offer” as a reason that revenue was down in the early 1930’s. Before Fairmont was built Thames Valley was the only show in town for public golfers. The public golfer had limited mobility in those days ie. not everyone owned a car, so the creation of a public track in the east end of London must have been welcome news to everyone who lived there. I have posted requests on a couple of websites dedicated to the history of London and/or Fairmont Subdivision but no one has been able to come up with a scorecard or layout diagram of this course. Surely someone has this information. There doesn’t appear to be any remnants of the golf course on the site. The best I can do is publish some aerial photographs which show the greens and tees and where possible I have drawn arrows to show the likely routing of the holes.

Fairmont Golf Course is probably best remembered for a jet aircraft crash on April 2, 1955 which occurred after the golf course had already ceased operations and houses were being constructed on the site. Jet aircraft were developed during the later stages of the Second World War although they played a small role in the outcome. Although jets played a huge role in the Korean War, the news of a training jet going down on the former Fairmont Golf Course was big news. Thousands of gawkers flocked to the site. The story is documented in this section. If you have any further information about Fairmont Golf Course, please let us know 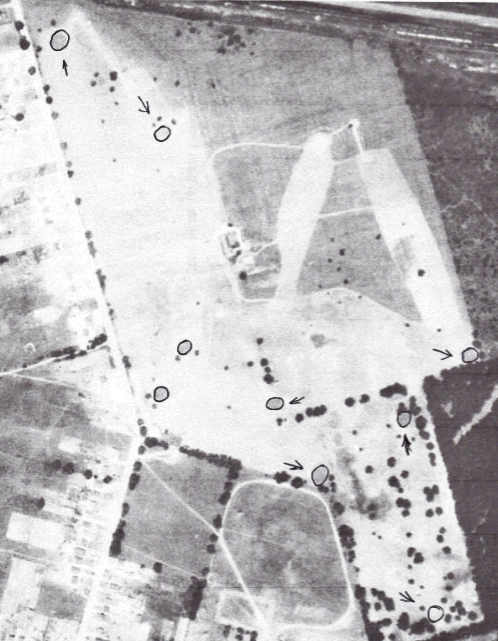 Here is the best aerial photograph available for Fairmont Golf Course taken in 1945. I have marked out the greens and drawn some arrows based on the trees, traps and most likely rotation of the holes. A scorecard with a layout diagram would solve the mystery. Since I posted this aerial photo we have received good information that Fairmont became 12 holes near the end of its existence. Looking at it now, I can see three more greens.  The most obvious is the one in the top right on the hole extending north-east from the clubhouse.

This is part of the 1935  Annual Report, written by John Innes, that explains why membership sales are down in 1935 at Thames Valley. The Great Depression could have also had something to do with it. 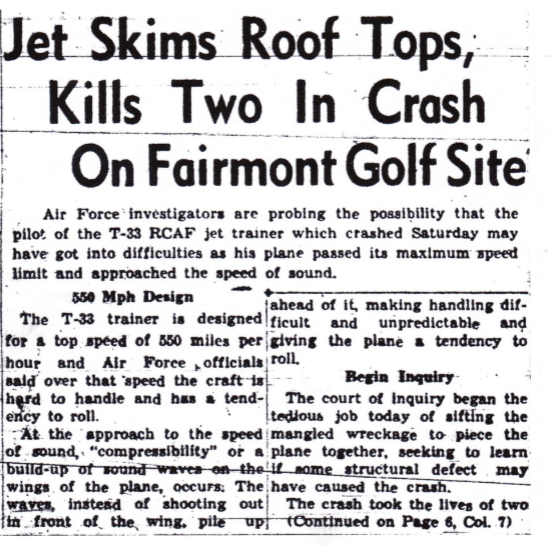 The beginning of the investigation into the crash of a jet aircraft on the former Fairmont Golf Course. 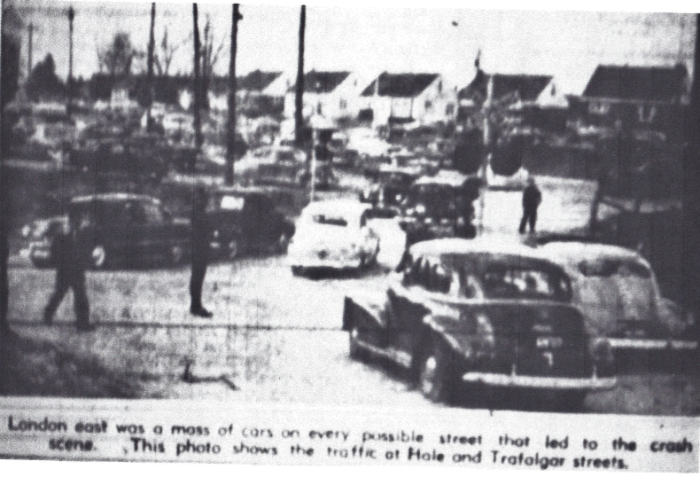 Thousands of Londoners flocked to the crash scene. Here is the huge traffic jam at Hale and Trafalgar. 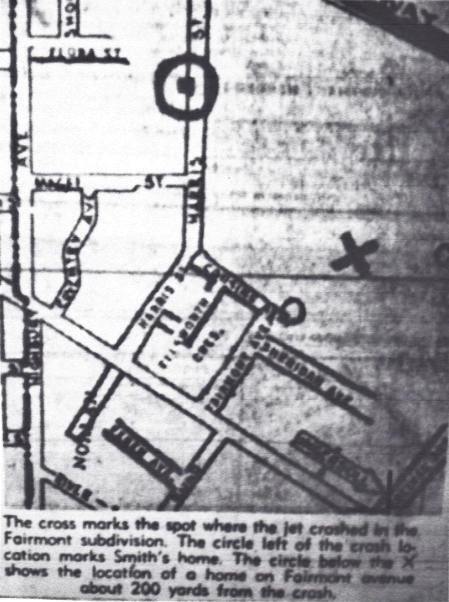 The “X” marks the spot where the jet crashed only about  200 yards from a house. Construction of houses in Fairmont subdivision was in full swing by this time. 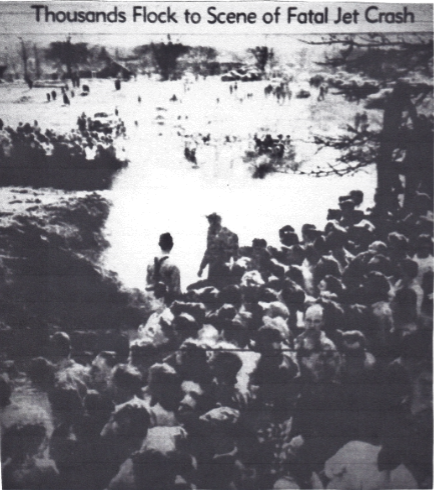 The massive 25 foot deep crater caused by the impact of the jet aircraft. 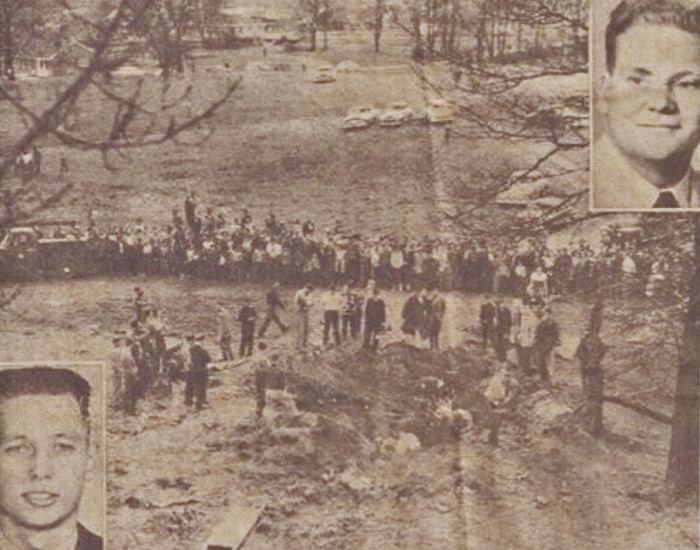 The aftermath of the jet aircraft crash on the former Fairmont Golf Course.

There are probably lots of good reasons why the twenty year old Fairmont Golf Course was plowed under in 1953 to make way for a subdivision. In the years after World War II there was plenty of demand for family type homes close to industrial parts of the City. Many of the occupants of these homes would have worked in the thriving manufacturing businesses in East London such as Kelloggs, McCormicks, 3M and GM to name just a few. Albert Hancock and his family had run Fairmont Golf Course for two decades starting in 1933 and really, who could blame him for selling off his course for development.

It is interesting that it appears that Fairmont was a twelve hole golf course near the end of its lifespan and it looks like there may have been enough land for six more holes which would have made it 18 with just a few more acres if the land was available. It is a bit unfortunate that Fairmont is not still a golf course. It was a well drained site and had a very accessible location for buses, bicycles and walkers. Once Arnold Palmer burst onto the scene winning the Canadian Open at Weston Golf Course in 1955 the popularity of golf soared both on television and as a participation sport. Eventually new courses would have to be constructed on the outskirts of the city to keep up with the demand for places to play. Of course by this time it was too late and the former golf course was nothing but houses on streets like Jasper, Cousins, Manitoulin and Fairway. Given its prime location, Fairmont Golf Course would likely have been a big time money-maker today. With the purchase of just a few more acres and some improvements, Fairmont could have become a full 18 hole course and the “Thames Valley of the East End” rather than a footnote to golf history and being remembered mainly for the jet aircraft crash in 1955 after the course was already closed.