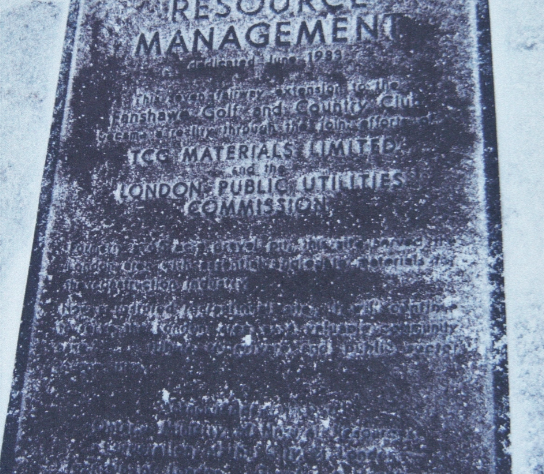 This brass plaque sits on the former #2 tee of the Blue Nine at Fanshawe. It explains the origins and benefits of this project.

The construction of the Blue Nine was a public/private partnership between the London P.U.C. and T.C.G. Materials. Early on the greens on the Blue Nine were great but playing conditions were less than ideal due to rocky topsoil and few trees. Over the years the quality of the turf has improved and this has turned into an excellent project.

In the 1970’s there had not been any long range planning regarding the expansion of the City of London municipal golf system. New clubhouses had been constructed at both Thames Valley and Fanshawe. Both courses suddenly had sizable mortgages to pay off.

At Fanshawe, because the new clubhouse was on a different site than before, rerouting of the entire golf course was required. Probably the main drawback to the site at Fanshawe was the active gravel pits to the north and west that created noise and dust.  TCG Materials had exhausted a gravel pit that was located along Sunningdale Road and they were going to have to rehabilitate it with topsoil and grass. An idea came forward that it might be in both parties best interest [TCG and the London PUC, who operated Fanshawe] to rehabilitate the site as a nine hole extension to the existing golf course. Long story short, that is exactly what happened and Fanshawe became a 27 hole golf course starting in 1982.

Although the new nine created more tee spots for the overcrowded Traditional course and generated more revenue, this project was not without its challenges. The new nine had zero trees and growing them in such a hostile environment proved difficult to do. The new greens were made out of 100% sand so they were tricky to keep alive at certain times of the year. They could turn an ugly blue color with just one dry, windy afternoon. Drainage in the fairways wasn’t perfect either. Naturally the golfers tended to shy away from the treeless new nine whenever possible. The challenges of keeping everyone happy in a busy 27 hole environment were very real. Coincidently the PUC started a policy to enforce a new dress code and clean up any liquor violations at the same time. This caused plenty of additional problems.

The starters had the most difficult position on the property as they had to negotiate cross-over tee times on the three nines with three different starting holes, two of which were located nowhere near the starter’s shack. The biggest plus of this project was the use of a gravel pit rather than prime farmland for a construction site and in the long term it has turned into a beautiful golf course that improves every year.

By the way we have been unable so far to locate one of the most important historical items which is a scorecard. If anyone has one could they please notify us so we can post it. 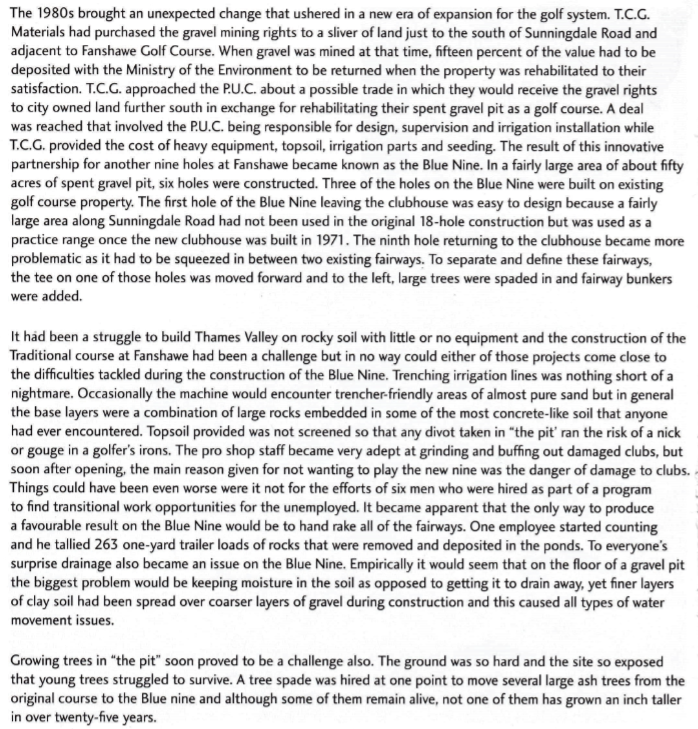 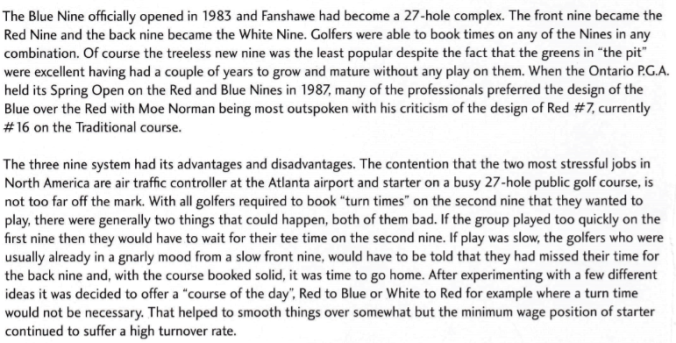 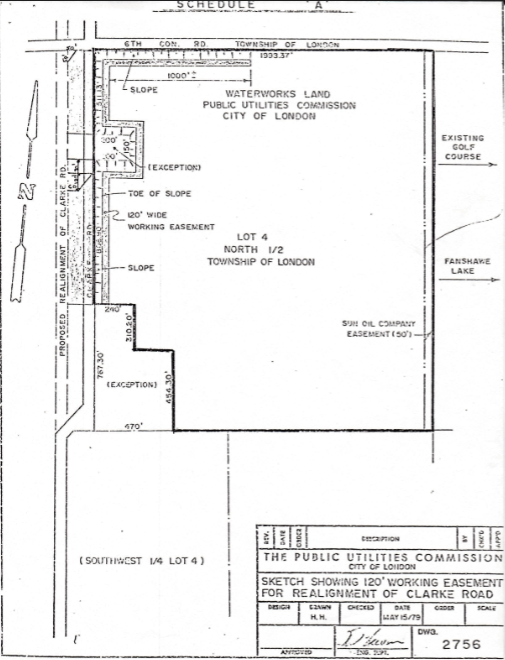 Original survey for the land where the Blue Nine was built. That small indent on the left side of the diagram included a house and, in the long run, it is unfortunate that the City failed to purchase this property when it was available. 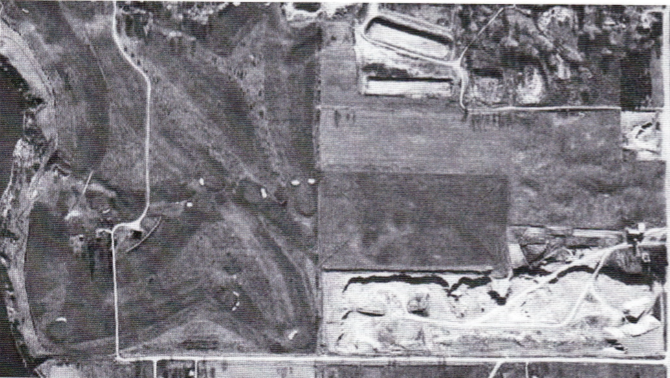 1967 Aerial of Fanshawe Golf Course. One of the best views of the original 12th hole to today’s Quarry #1 green and the original 13th hole which approached today’s Traditional #8 from a much different angle. In this photo also is the initial stages of gravel extraction along Sunningdale Road which eventually led to the construction of the Blue Nine. 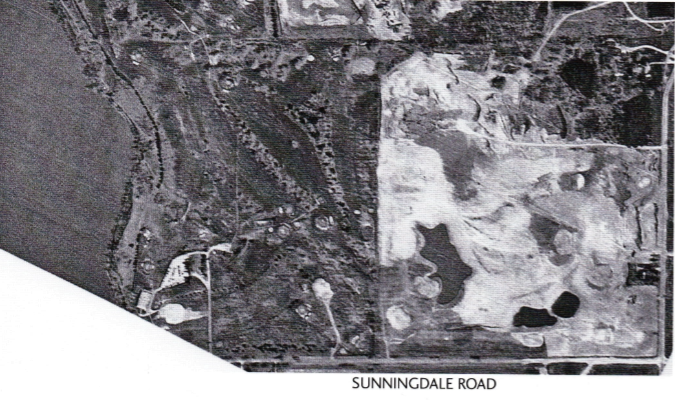 The Blue Nine under construction in 1982. The construction of two greens on the existing property can be seen also.

Of all the parts of the City of London Golf Course System, the sparsest documentation belongs to the construction of the Blue Nine which resulted in a 27 hole golf operation at Fanshawe from 1982 until 1998. That is a bit strange because 1982 doesn’t seem like that long ago. Not a single photo of the construction survives to my knowledge although it would be great if someone could come up with some pics and we could put them up here. Years ago I saw a couple but I am not sure of the fate of those. The golf course archives does have the original diagrams, irrigation plans and documentation of the agreements between the former London Public Utilities Commission and T.C.G. Materials in this early effort at a public/private partnership.

If this somewhat groundbreaking project to build the Blue Nine had never happened then I am convinced that the City system would have been capped at 45 holes forever [18 at Fanshawe and 27 at Thames Valley] and many would argue that an outcome like that would have been the best in the long run. Instead today there are twice as many holes [90]. At any rate what did happen is this:

1. The Blue Nine was built, opened in 1982 and although the new nine had many construction challenges and drawbacks, it quickly became apparent that there were huge advantages to having 27 regulation holes in regards to tournament accommodation, maintenance activities and most importantly revenue generation.

3. The financial success of the two 27 hole layouts was undeniable and the money rolled in.

4. Surplus revenues from Thames and Fanshawe built up to such an alarmingly high number that the London PUC decided to build a new golf course [River Road} with the plentiful dollars.

6. The success of the Blue Nine project allowed the London PUC to enter into another “Blue Nine” type of agreement with TCG Materials to construct a 4th nine at Fanshawe.

7. The 4th regulation nine at Fanshawe was built and added to the Blue Nine to become the Quarry 18 hole course and somewhat unexpectedly the Parkside Nine emerged from the mix. The nine extra holes of the Parkside Nine led to the current ninety total in the city system.

The chain reaction of events which led to the doubling of the size of the City Golf System occurred in the short span of 15 years. It was an unusual story given that the golfers, not the taxpayers were paying for all construction costs. The huge financial success of City golf operations played a large part as did the decision to dissolve the London Public Utilities Commission in 1993 and for the City to take over responsibility for City golf courses. In retrospect it all started with the seemingly small decision to turn a spent gravel pit adjacent to Fanshawe Golf Club into a golf course and to call it the “Blue Nine”.