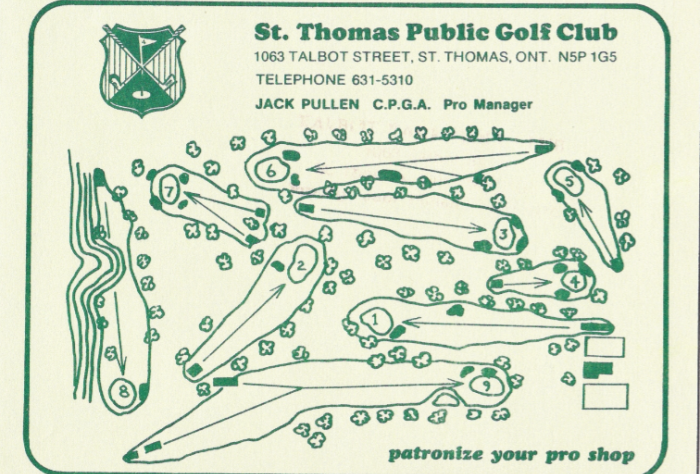 Layout diagram from the scorecard of the final configuration of the holes at St. Thomas Public/ Talbot Park. Course closed in 2001.

City of St. Thomas until 1945
Timken Roller Bearing Company of Canton Ohio after 1945

Unknown. Jack Pullen redesigned the course in the 1960’s with 2 variable sets of tees.

The value of having this affordable course in an accessible location almost downtown in St. Thomas cannot be overestimated. A bit sad that the former site [except for #7 green and #8 hole] is completely built on or asphalted over. You could hit some long drives now……particularly on #1, #3 and #6.

The St. Thomas Public Golf club, later renamed the Talbot Park Golf Course was a nine holer that was located on the main street of St. Thomas, Talbot street, and very close to downtown. It was originally the site of the Elgin Golf Club from 1909 to 1922. At that point the Elgin Golf Club had their eye  on a farm on Sparta Line. The potential to construct a Championship 18 hole layout on that site appealed to the members of the Elgin Golf Club so they moved away from downtown and changed their name to the St. Thomas Golf and Country Club. Harry Lewis then entered into a lease agreement with the City of St. Thomas to operate a public golf course on the former site of the Elgin Golf Club. The value of having a public golf course in such an accessible location was apparent to everyone. Kids could walk or ride their bikes and plenty of public golfers could arrive on foot dragging their carts behind them.

It is hard to believe that for a short time the St. Thomas Public Golf Club had 18 holes. The club was doing well throughout the 1920’s so the owner, Harry Lewis decided to expand the course to a full 18 in 1931. Unfortunately the new nine holes, located on the current site of the Timken plant, had greens made of oil-covered sand rather than grass. Generally all-sand greens mixed with oil are only used in areas where it is extremely difficult to grow grass [deserts and extreme northerly climates] and I can’t see how southern Ontario qualifies in that regard. The new nine holes proved so unpopular that they were abandoned for golf prior to the 1935 season. Sand and oil greens in our area? Who would have thought……

1969 was the second season for the new Tyson Junior Tour, started by Bev Tyrrell, sports writer for the London Free Press. The first year’s winner was Harold Kewley from St. Thomas Public golf course. There were only four junior tournaments on the tour in 1968 and the winner was determined by stroke average in all four tournaments. If you had to miss one then you were out of luck. In 1969 the format changed to a point system but you could only count your best four of the six tournaments on the tour. I was in contention for the Tyson Trophy that year but I had already missed two events. I needed a decent amount of points in the final tournament site which was St. Thomas Public. I had never seen the course but I had played several tournament rounds that summer with a junior member who warned me that the course was not very easy. The tournament day was windy and overcast and I soon found out that my friend was right. I limped home with six over par, 39, on the first nine which included a double bogey on the intimidating “Railroad” hole which ran along the tracks…..OB to the right. I figured my chances for the Tyson Trophy were over but I managed to shoot an even par 33 the second time around. Par was 66 but my 72 got me plenty of points and the 1969 Tyson Trophy. I even salvaged a par on my second try at the tough 8th. Seems other golfers were also finding out that the course was not a cakewalk. It turned out to be the only round I ever played at the course.

The course is not there anymore and the property has been turned into a massive outdoor mall anchored by Wal-Mart, Staples, Wendy’s, Canadian Tire and a gas bar built on the site of the old clubhouse. I went out to get some photos of how the course looks now and there is very little left. However far at the back of the property I found the old 8th tee complete with a  ballwasher post and the posts for the tee sign. Sure enough the railroad tracks are still there and they still look ominous. I have included the photos in this section.

Here is the St. Thomas Public/Talbot Park golf course as it looks today. The anchor store of this development is a gigantic Wal-Mart located right in the middle of #6 fairway. The only greenspace left is the green site for #7 and #8 hole. The Railway tracks run parallel to #8, just to the right of the photo. 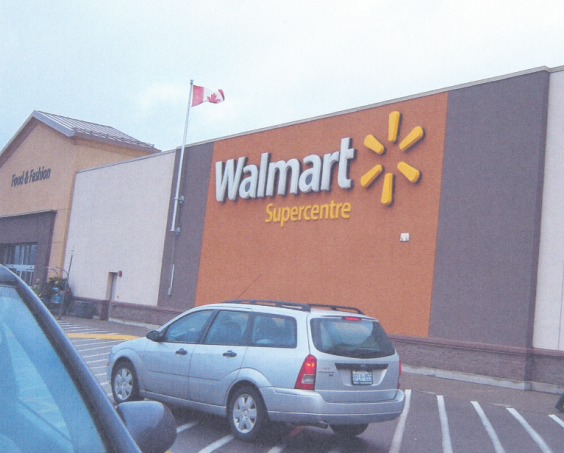 The Wal-Mart takes up a big chunk of #6 fairway. 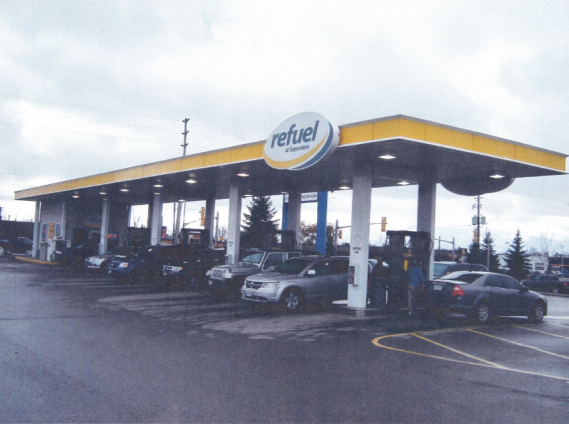 The site of the former clubhouse is a busy gas bar. 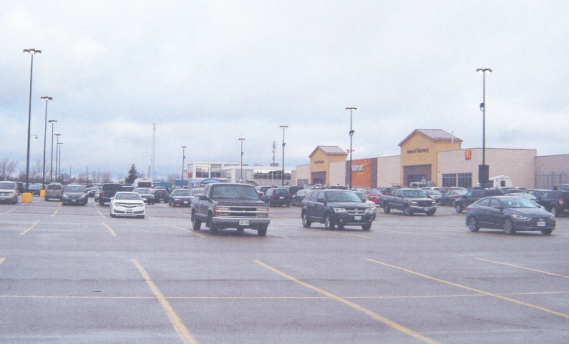 #1 fairway looking north toward the tracks. Kind of scary how those rows of light standards are about in the same locations as the former treelines to separate the fairways. You could hit a really long drive now on #1. 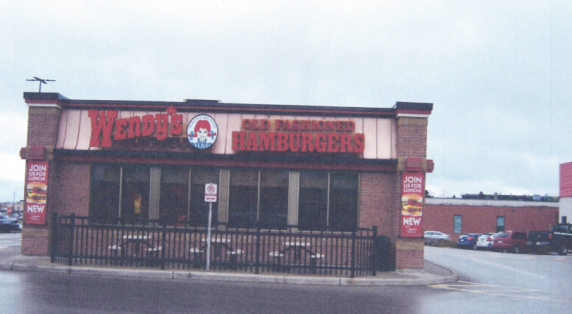 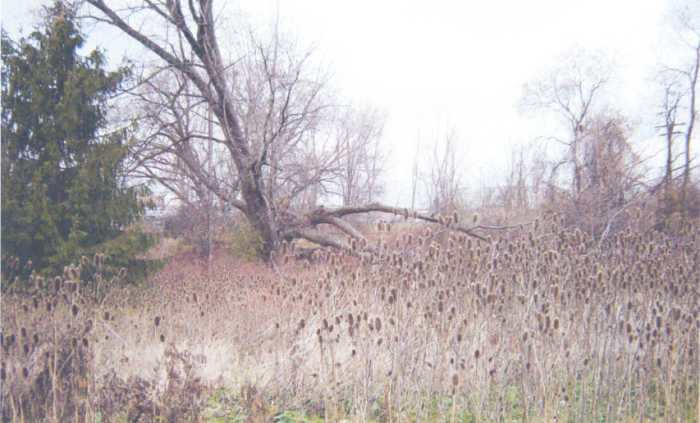 #7 green. That dead tree was huge and its location behind #7 green was noted on the scorecard. 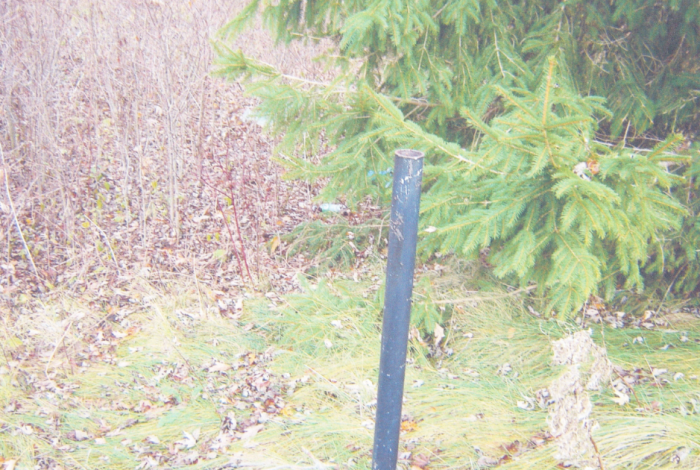 This course closed in 2001 yet the ballwasher post for #8 tee sits there almost as good as new. Could still use it today. 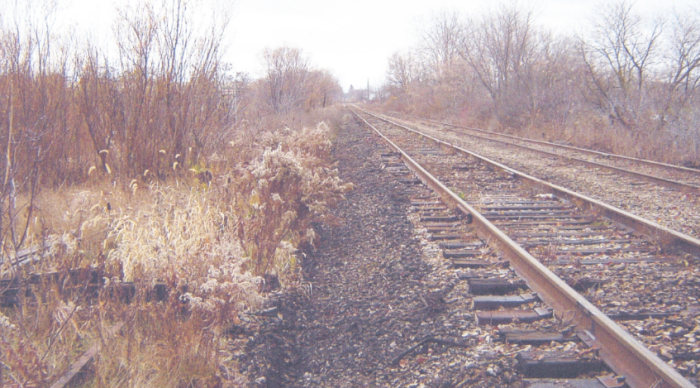 The ominous railroad tracks still run the entire length of #8 from tee to green. Out of Bounds. Reload. 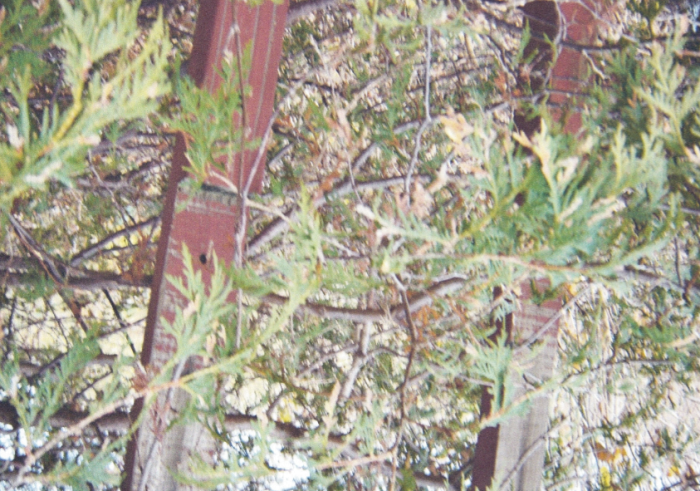 Was surprised to find the wooden posts for the #8 tee sign, overgrown but still in good shape. 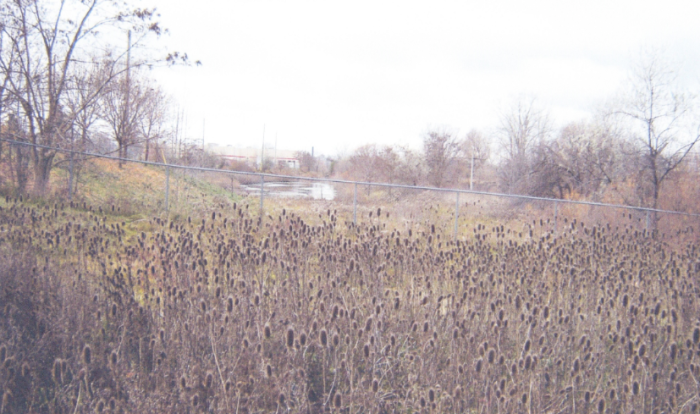 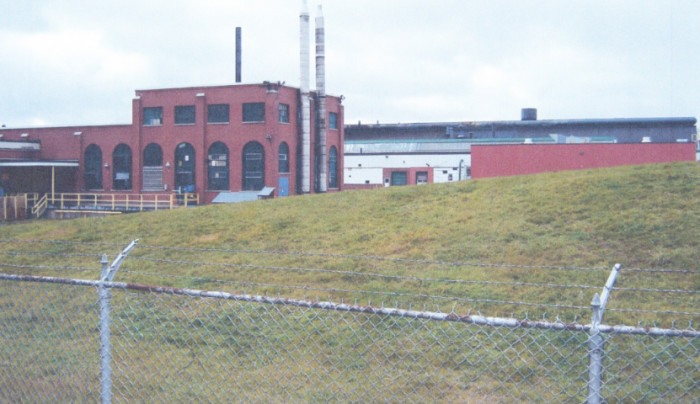 The Timken plant dominated the landscape at St. Thomas Public golf course in more ways than one. They owned the land where the course was located. The land that this plant still  occupies was the site of 9 more holes in the early 1930’s. Unfortunately those holes had green’s surfaces made of a sand/oil mix rather than the more traditional grass. Golfers were not impressed and failed to patronize the “sand/oil” nine. 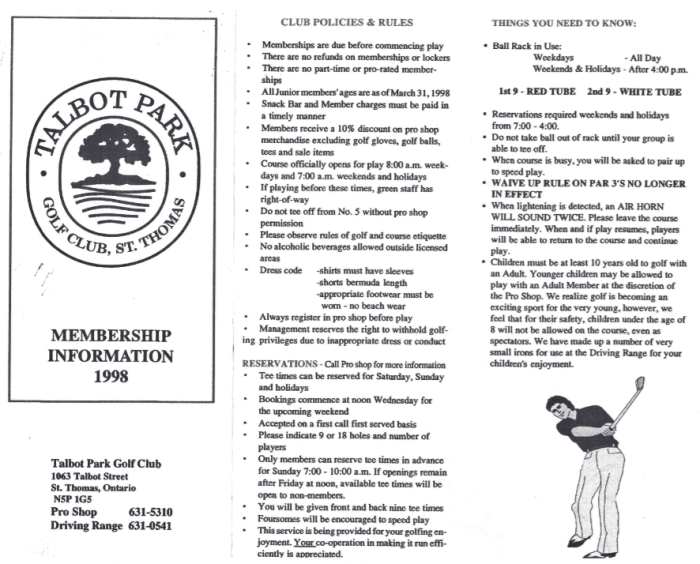 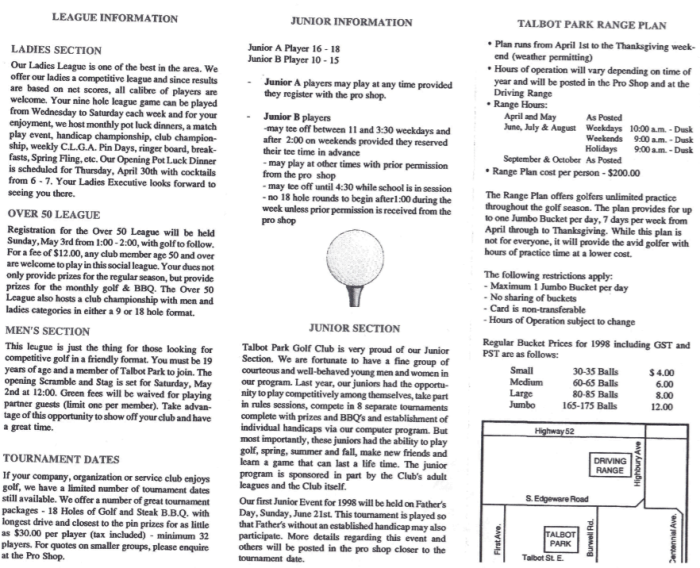 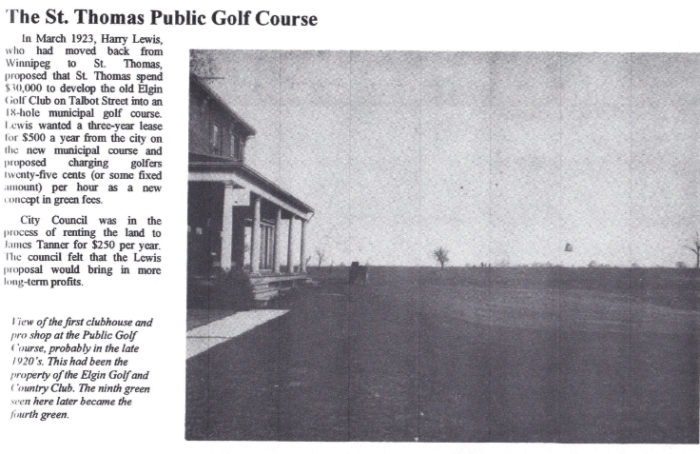 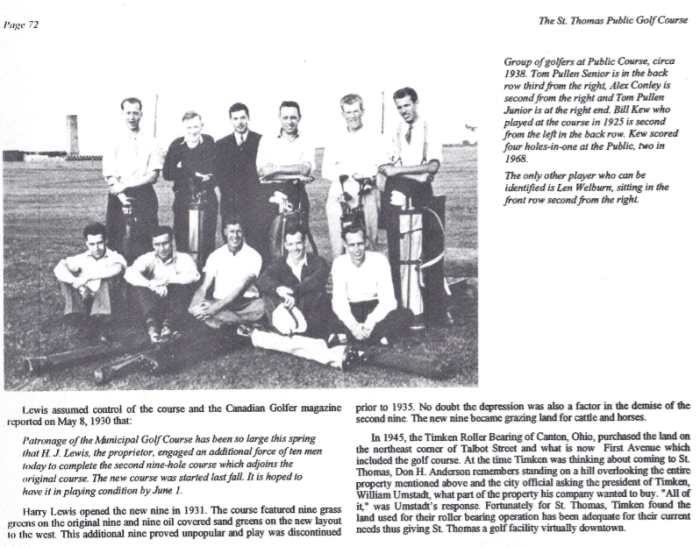 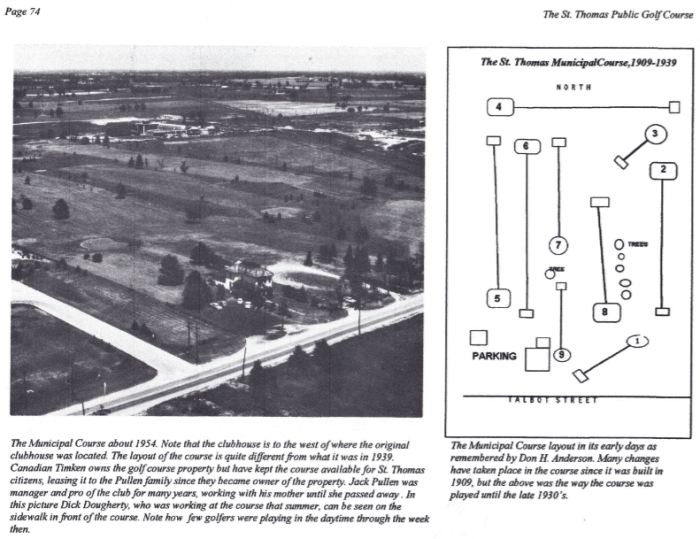 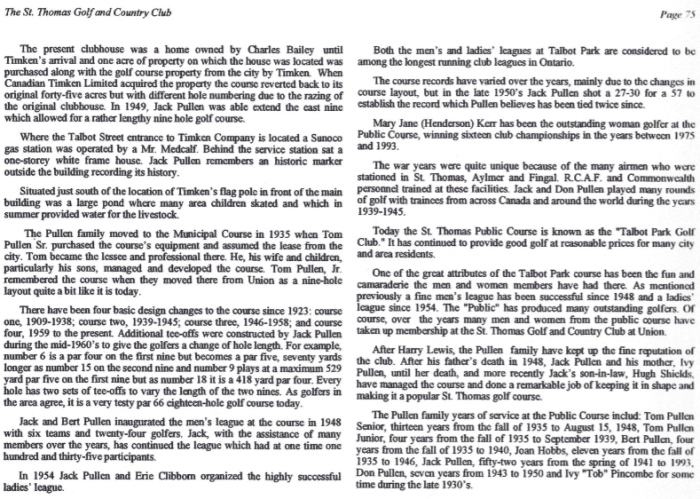 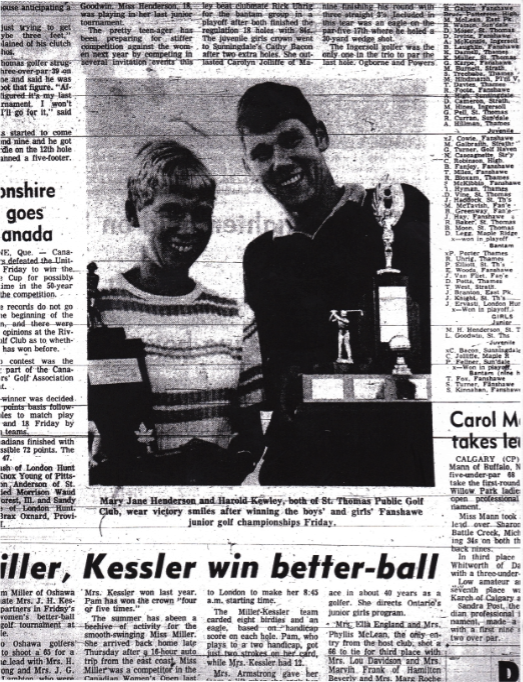 The first winner of the Tyson Junior Golf Tour was Harold Kewley from St. Thomas Public golf club. The Tyson Tour celebrates its 50th Anniversary this year. Harold has just won the last event on the 1968 Junior Tour with a dramatic chip-in for a 72 on the 18th hole at Fanshawe while 4 other players who had shot 73’s looked on. The win cemented his capture of the inaugural Tour. It is appropriate that Mary Jane Henderson, also from St. Thomas Public was victorious in the girl’s division. Mary Jane went on to have a fine amateur golf career. 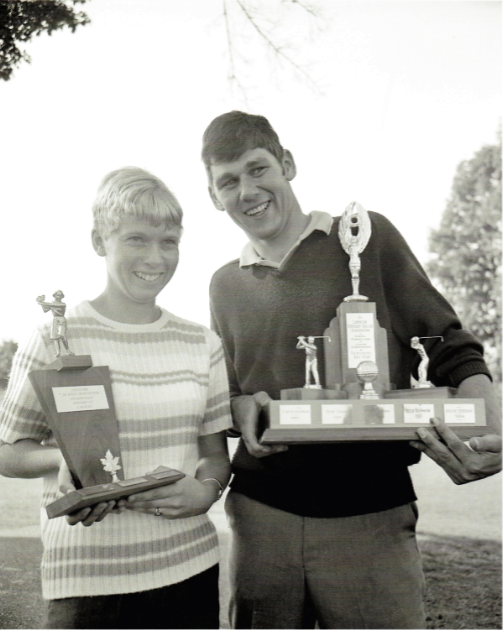 Here is a better resolution photo from the Western University Archives.

This past fall I set up a meeting with Jack Pullen, PGA of Canada Life member and former owner and operator of St. Thomas Public Golf Course. We were going to discuss both the St. Thomas G&CC and the Nine Hole St. Thomas Public golf course. Jack is 87 and has a keen memory of everything of importance that ever happened at both St. Thomas courses. We started at the Country Club and took a lot of the photos that you can see on the St. Thomas G&CC page of the website. I knew a bit about the history of that course but Jack knew it all. It was a cold, windy, rainy day but we managed to finish looking at everything we wanted to see.

After that we decided that we still had enough time to check out the site of the former St. Thomas Public golf course. Jack knew exactly where to go and I followed him to 1063 Talbot Street, on the main drag in St, Thomas. I had only played the course once, two nine hole rounds 48 years previously, but I remembered many features of the course including the massive Timken Plant, the downtown location, the layout of the holes and the railroad tracks at the north end of the property adjacent to #8 fairway.

If you are a bit of a sentimental golfer then it is a bit difficult to stand on the site of a former golf course and to see what it has become. I think I can stand the chain restaurants, financial institutions and big-box retail outlets a bit better than the fact that the central part of the course is nothing more than a giant parking lot. Asphalt where grass and trees used to grow.

Jack offered to buy me lunch at the Wendy’s that more or less occupies the site of the former ninth green. While in line waiting for our order we chatted with another customer about the former golf course on the site. Lunch was great but I couldn’t help thinking while I was eating about golf people like Jack who put their heart and soul into their golf business only to have it turned into a Wal-Mart Superstore [of all things], cookiecutter retail establishments and a gigantic parking lot.