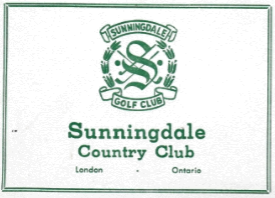 Sunningdale Country Club, 1950’s Scorecard. At this point the course only had 18 holes.

#3 – A beautiful downhill par 3 with a huge elevation change. This hole was particularly intimidating when played from the back tee situated just behind present #2 Thompson green. This tee still exists although it is overgrown with brambles

The three holes that were abandoned along the Medway creek in the mid-1930’s are the exact location of the land to build six new holes to replace present holes south of Sunningdale Road. The new holes will be built on a beautiful site

The late J. Gordon Thompson enjoyed a fabulous business career in the Forest City and also made a name for himself in golf and hydroplane racing. He was the owner of “Supertest Petroleum”, a London based company with a head office at the corner of Richmond Street and Pall Mall. At its peak Supertest operated about 2000 gas stations across Ontario.

Although the name J. Gordon Thompson is indelibly linked to Supertest Petroleum as a business enterprise, it was his passion for speedboat racing that tugged at the heart of many Canadians. The Americans were the best at speedboat racing and had held the championship of the sport called the “Harmsworth Cup” for 39 consecutive years. Thompson was the owner of a hydroplane called “Miss Supertest III which was engineered by his son Jim Thompson and driven by family friend Bob Hayward from Embro, Ontario. “Miss Supertest III” was never beaten and defeated all American challengers at three consecutive Harmsworth Cups as well as the Detroit Memorial race. For people of this generation it would be hard to explain the importance of the victories in these races to the national pride of Canadians. They were front page news. The engine for Miss Supertest was essentially the same Rolls Royce engine designed for the legendary Spitfire fighter plane that played a significant role in the outcome of World War II. The speeds and risks of this sport were from another time and era as it would be hard to believe that this sport in its purest form could exist today. Miss Supertest III was a missile on water that could reach speeds of 300 kmph and the playing field was the turbulent Detroit River, not some glassy lake.

J. Gordon Thompson created Supertest Petroleum [which was sold to BP in 1970] , was famous for Speedboat racing but his longest lasting achievement may be Sunningdale G&CC which he founded in 1934. 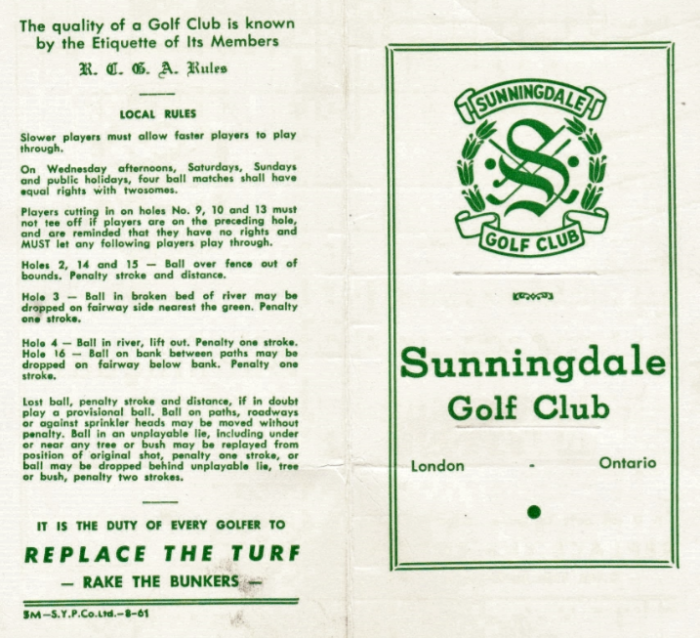 This is the scorecard from the 1950’s. Hard not to notice the heading above the Local Rules: “The quality of a Golf Club is known by the Etiquette of Its Members”. Sunningdale prided itself on the pace of play of the course and had a few different signs posted on the first tee over the years about expectations of how long a round should take. 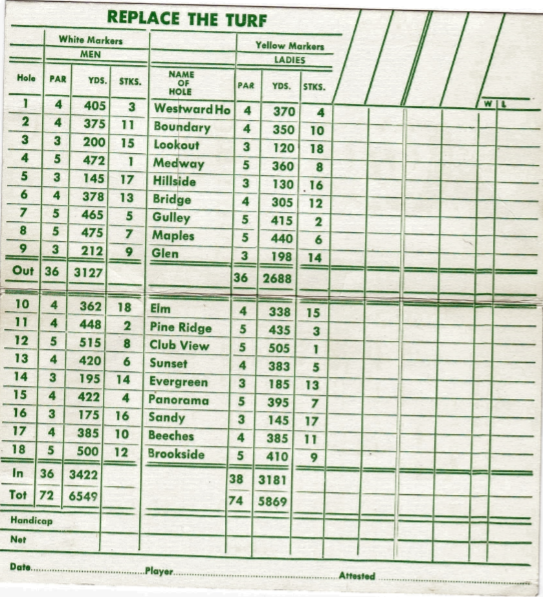 Every hole at Sunningdale had a name. The third hole “Lookout” was tough from the back tee and the ninth, “Glen” was always a difficult par three. 6,549 yards from the back tees with plenty of water hazards, deep fairway bunkers and plenty of chances to hit it OB meant that this was a tough track in the 1950’s. 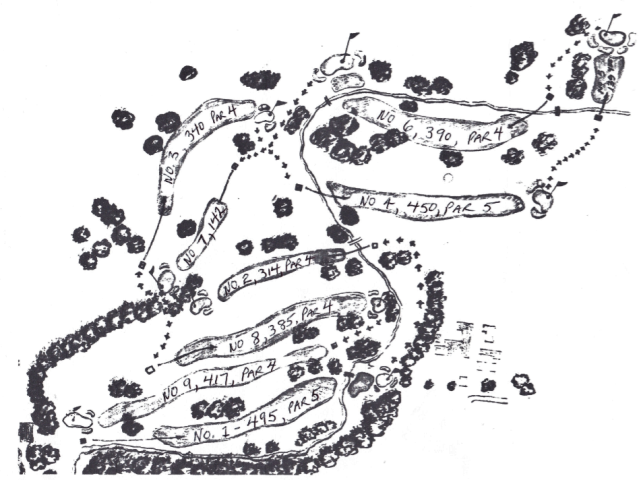 This was Sunningdale for the opening year, 1934. It was only nine holes and the first hole was #4 Thompson today. #5 Thompson was not built yet so you walked over to #6 which played as #2. Then you headed up to the #7 tee and played an unusual dogleg right to the present day #15 green.  After that you walked down to the Medway creek flats to play a three hole loop of holes that were abandoned soon after construction. Plenty of bridges over the Medway Creek required for that short three hole stretch. #4 and #5 don’t look too tough but #6 looks very difficult……crossing the creek twice. After that you had to scale that huge hill behind #15 green in order to play current #16 Thompson as #7.  Scouted out that climb this fall and it is amazing the slope of that hill. The path up the hill can still be seen. Lucky that the golf cart had not been invented yet. #8 and #9 were today’s 17th and 18th. Tough course to walk. Amazing diagram. 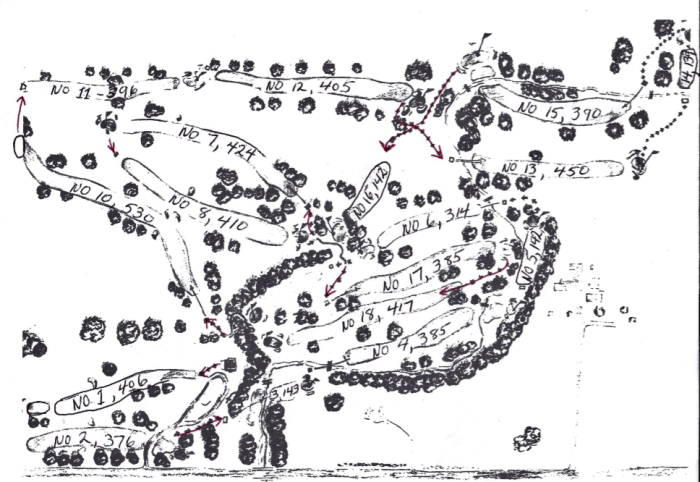 By the next year, 1935, a full 18 holes were in play. The front nine is almost exactly the same as today’s Thompson course. Forgive me for omitting  to mark in the 9th hole but you Sunningdale members know where it went. Same as today. The back nine was quite a bit different. #10 was not as long as it is today and somewhat amazingly, the contours of the old tenth green can be clearly seen in the right rough of present #10, about 100 yards short of the present green. The next two holes were present day #14 and #15 followed by the “Medway creek flats” three hole loop. The next 3 holes [16, 17 and 18] are identical to today. Another astonishing diagram. 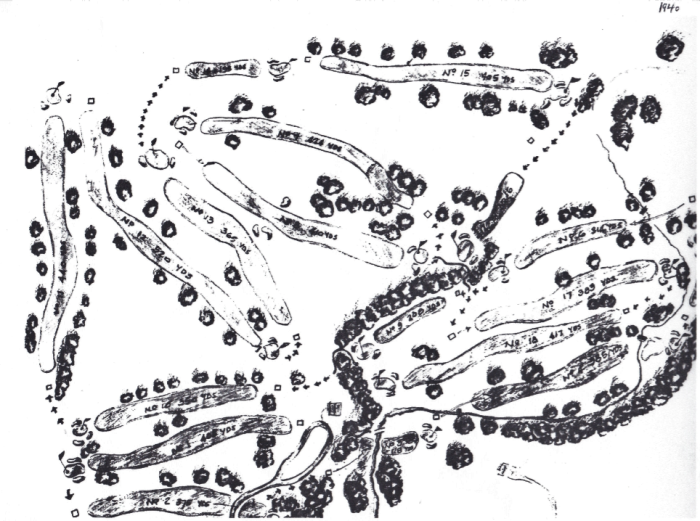 By 1940 the holes on the Medway creek flats had been abandoned in favor of three holes at the west side of the property. In 1940 the front nine was similar to the front nine of the Thompson today. At this point the back nine went: #1 Robinson, #17 Robinson, #18 Robinson, a shorter version of #10 Thompson, #14 Thompson played as a par 3 and then 15 to 18 played the same as they are now.. 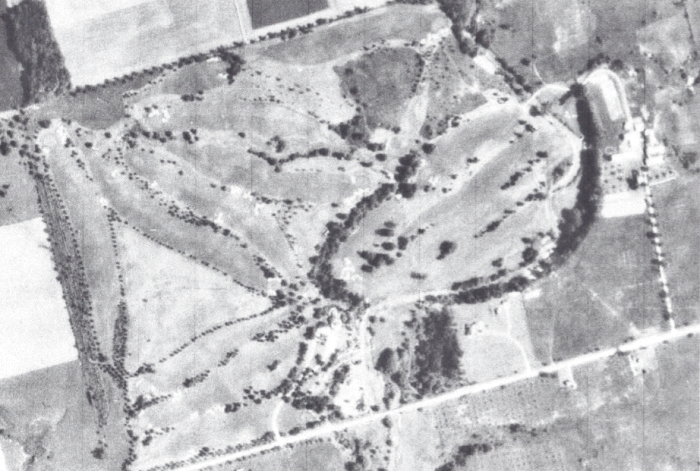 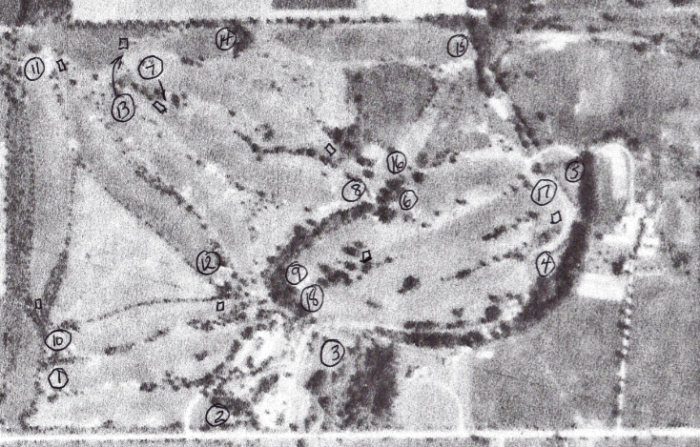 1955 Aerial with the greens numbered.

C.R. [Ross] Somerville was the popular local winner of the 1937 Ontario Amateur held at the newly constructed [1934] Sunningdale Country Club. In 1934 the course had opened with only nine holes and the following year, 1935, 18 holes were in play. It must have been a challenge for such a young club to host such a prestigious event so early in their operation. Sandy Somerville seemed to have a lot to do with the design of Sunningdale so I have to believe that it was, to some extent, his influence that brought the 1937 Ontario Amateur to the Sunningdale Country Club.

Here is a photo of Sandy Somerville hitting the inaugural tee shot on the first hole of the first 9 hole layout in 1933 before the course was open for play. Today this hole is #4 Thompson and he is hitting the shot from high up on the cliff near the original frame clubhouse. 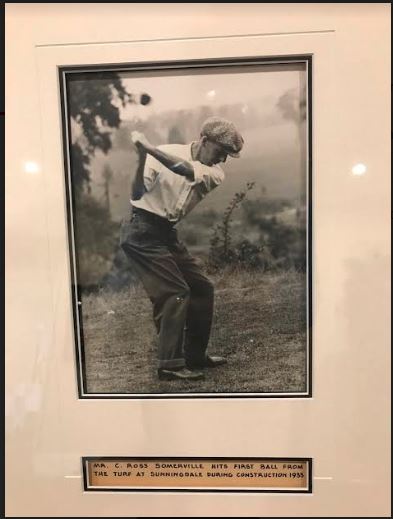 Here is the Sunningdale layout used for the 1937 Ontario Amateur. I find it interesting that the match play tournament ended on the 13th hole.......a hole that doesn't exist anymore. It was one of the three holes that were located along the Medway Creek flats to the north and east of current #6 Robinson tee. These three holes were abandoned by 1940 due to the possibility of flooding, numerous bridge washouts and a steep cliff that had to be scaled to get back up to the level of today's Robinson #16. The land where these three abandoned holes were located makes up an important part of the area where six new Sunningdale holes are planned to open in 2019.

#13 is where Sandy Somerville closed out the tournament. 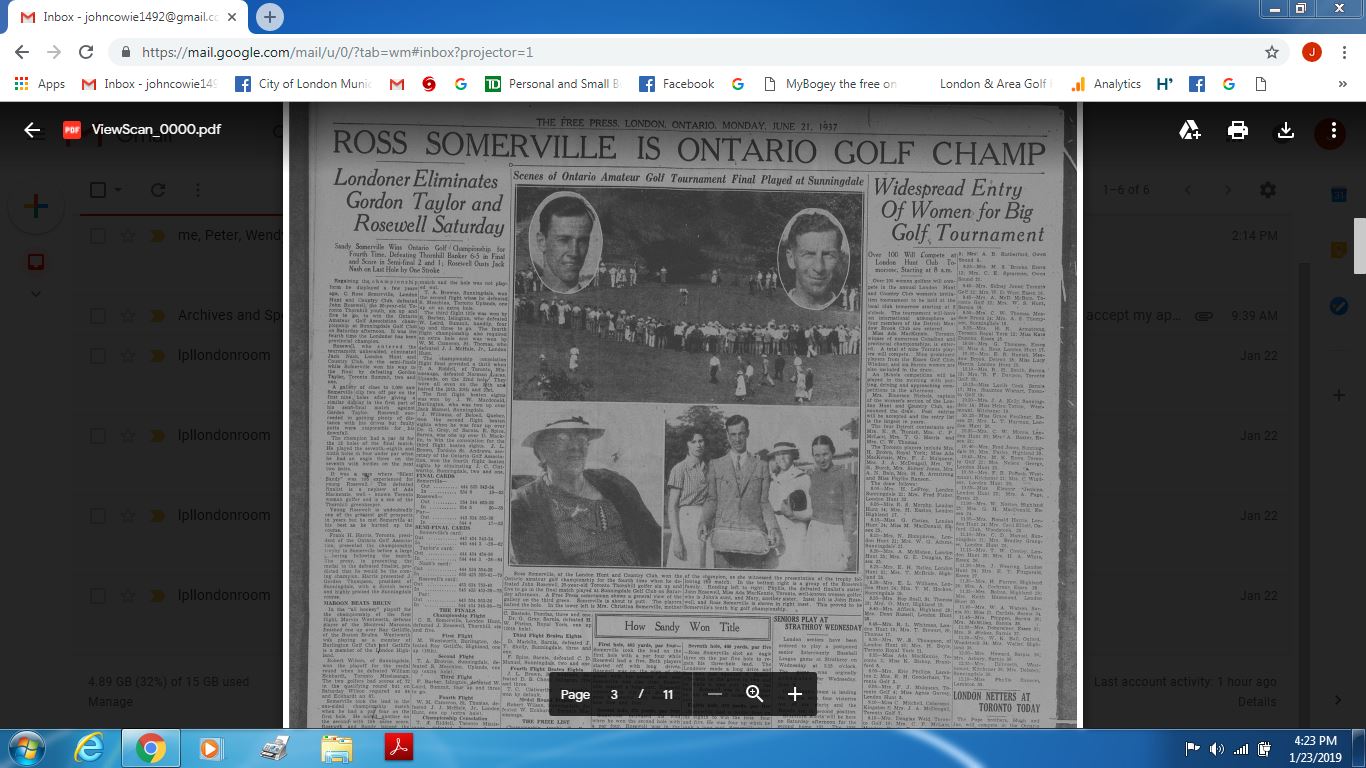 Eventually Sandy Somerville won his 4th Ontario Amateur defeating John Rosewell 6&5 in the final match. Rosewell had advanced by beating Jack Nash by 1-up in the semifinals and Somerville had ousted one of the pre-tournament favorites, Gordon Taylor 2&1 to get to the finals. 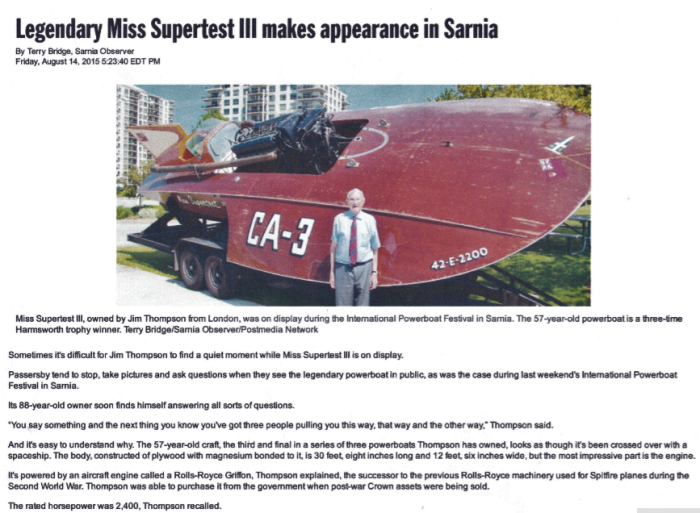 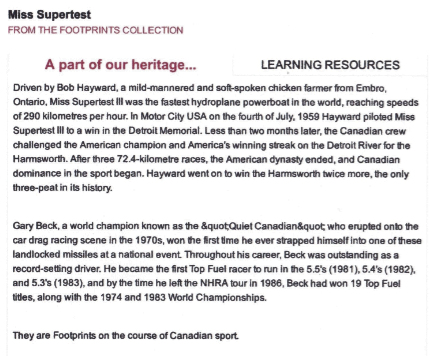 Here is a photo of Miss Supertest III in action on Fanshawe Lake in 1955. For all you Fanshawe golfers, the big tree in #1 Traditional Fairway [the vulture tree] figures prominently in the background.

I guess the more things change, the more they stay the same. I am intrigued with the diagram for the opening year, 1934, at Sunningdale where the current 4th hole on the Thompson is the first hole. No big deal because Sunningdale was designed by Stanley Thompson as a full 18 and golf courses often open with the nine holes that was furthest ahead in the construction schedule. It is interesting that Sunningdale plans to go back to the 4th hole becoming the first hole on the Thompson-Carrick design that would also see a return to the Medway flats area where 3 holes were abandoned in the late 1930's. Six holes will now be constructed in that pretty piece of land along the creek and stretching close to Richmond Street.

One huge advantage for Sunningdale is that the club has never been landlocked in any way and there has always been enough land available to make numerous layout changes and additional holes with fine results. Take the current sixth hole, for example, on the Thompson course. Designwise it has undergone little change but it started as #2 in 1934, became #3 in 1935, by 1940 it was #6, in 1960 it was #6 Front Nine in the three nine system, in 1971 it was #6 on the "Old" course, then it became #6 Thompson and soon it will become #9, Thompson-Carrick. Seven name changes for the same hole that is also one of the best on the course. Reticence to change is not a Sunningdale hallmark.

When Sunningdale was first built it was the ultimate "Country Club", far from the north end city limits that ended at Huron Street. Now the development close to its location is intense. The acreage that is available for golf remains huge but the rural feeling of golf at Sunningdale may soon be a thing of the past.