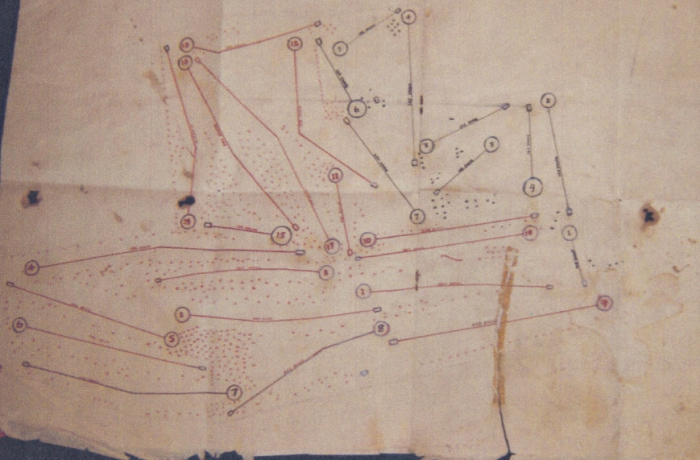 John Innes; this redesign was a major rerouting by Bill Fox Sr.

#4 – one of the toughest par 5’s ever. From the middle of present #8 Classic fairway to present #12 Classic green. Tight OB right, possible lost ball left.

Length [the longest version of Thames Valley @ 6,569 yards]
Trees
Scenery
Affordable
Advantages of having both nines return to the
clubhouse on one of Canada’s busiest tracks

In the fall of 1967 the aging frame clubhouse at Thames Valley was intentionally burned to the ground and a new clubhouse was constructed over the winter of 1967-1968. The cost of the new clubhouse was $340,000 which produced a sizeable mortgage payment for an operation that prided itself on being affordable. The new clubhouse had a liquor licence and the new business model was necessarily going to count on revenue from food and bar, banquets and tournaments in order to be self-sustaining. The problems of the new business model quickly became apparent because of the limitations of an 18 hole layout that did not return to the clubhouse after nine holes. Nine hole players could not be accommodated on the back nine early in the morning and the support for a “Country Club” type atmosphere at a public golf course was not strong. The price of beer was too high……in the minds of the members.

Some of the most important decisions regarding London’s Municipal golf courses have always been addressing the uneasy balance between providing the best possible golf experience versus running a business that can supply enough revenue to sustain itself. In 1972 due to the shaky financial situation, the decision was made to alter the layout of the 18 hole course in order to have both nines return to the clubhouse. On the positive side the 18 hole course became longer and tougher. Nine hole players could be better accommodated on the 18 hole course and clubhouse sales increased. The club was placed on a better financial footing.

On the negative side the 9 hole course became less challenging and interesting and the 18th hole became present Hickory #9…….a far cry from ending your round with the traditional stretch of beautiful holes along the river. Also the family that had run the halfway house close to Riverside Drive as a private contractor for many years was not pleased with the new layout change. The halfway house had been accessible for golfers finishing #7 and #10 on Layout #6 but  with this new layout change [#7]….they were left out in the cold. The real halfway house had become the new clubhouse…..which had a liquor licence.

The new 18 hole layout featured two of the toughest holes in a row ever. #4 became a long par 5 from a tee that can still be seen in the middle of the present eighth fairway to the current 12th green. Playing into the prevailing wind and with OB to the right and possible lost ball in unmaintained areas on the left, it was a brute. The following hole was marginally easier, a 247 yard par 3 from the top of the hill to the present 13th green. It is difficult enough to hit the 13th green with a wedge, let alone a driver. Dave Bowie, famously, scored the only verified hole in one there, with a 4 wood.

Another interesting event from this period of time was a planned program to improve the course by rebuilding two greens and two tees each year for nine years with the goal of having the course completely updated within a decade. Phase 1 began in 1976 with a complete rebuild of present #7 and #10 greens, regrading of #12 and #15 fairways and a new tee on #15. Temporary greens were constructed for both #7 and #10 and remarkably they still exist. The temp for #7 sits just to the north of the yawning greenside trap and an oak tree is now flourishing on the temporary for #10, just to the left and short of the green. They are easy to see. Phase 1 of the complete renovation of Thames Valley’s greens experienced its share of construction problems and the new greens were slow to improve. Even a few years later the temporaries were occasionally still in use. Phase 2 was to include all of the area from #1 green down to #18 tee and was to include #1 green, #2 tee, #17 green and #18 tee. Usually in the golf business the best way to make changes is to do them quickly and on a grand scale……take the flack and hope the project works out. Support for the plan vanished as the vision of playing two temporary greens for a decade just wasn’t going to be supported by the members…..or the politicians. Phase 2 as well as Phases 3, 4, 5, 6, 7, 8 and 9 never happened. Accordingly the design and construction of #7 and #10 greens do not match any others on the course. This layout change, probably more than any other, demonstrates the difficulties of running a golf operation with limited resources in a very public setting.

Arguably this seventh layout from 1973 to 1984 was the time when Thames Valley was overused the most. During these years there was no clear starting time in the morning so many members would come and tee off at 5:30am in June. Plenty of senior members and green fee players who only wanted to play nine holes would climb up the hill to the tenth tee to play the back nine. Fast early morning groups would make the turn after nine only to find 20-25 golfers ahead of them on the tenth tee. It was not a pretty sight at times. Also nine hole round opportunities late in the day were enhanced by this layout and twilight green fees became available. The bottom line was that golfers basically were out playing Thames Valley whenever there was enough sunlight to play. The number of rounds put through this public golf course was staggering.

Here is a scorecard from this layout, complete with a hole in one on the difficult 11th.

Another Version of the Thames Valley Layout #7 Scorecard

Here is another version of the scorecard. 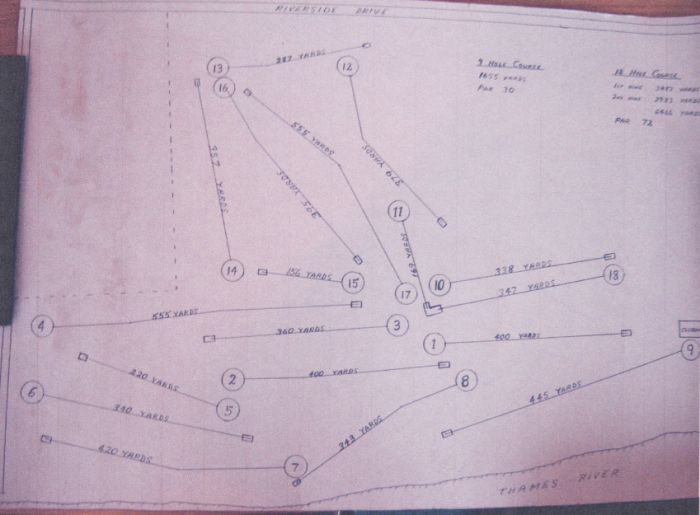 There are a couple of lessons to be learned from this project. The first one is to be awfully careful regarding decisions to build large clubhouses if they are not guaranteed to provide large amounts of extra revenue to pay for themselves and justify their existence. Here was a case where even a totally solid, grass roots, public golf operation got into trouble by trying to improve the golf experience with an improved clubhouse.  Sometimes the “Tarandowah Model” can be superior to the “Sunningdale Model”. The new clubhouse built in 1968 featured plush carpeting, two men’s locker rooms, electric heating, eight water heaters for all of the showers and even a coat check room at the foot of the main entrance stairs. Thames Valley was still a working man’s golf course and the problems of not having the 9th hole return to the clubhouse limited food and bar sales. The halfway house was run by a private operator. The case of Craigowan comes to mind as no one is going to question the quality of the golf course at that facility.

The decision to reroute the golf course to bring both nines back to the clubhouse was a necessary one and although the Classic course was still great, the design and challenge of the “Nine Hole Course” suffered. I guess that is the other lesson to be learned which is not to forget about any part of the operation and the smaller nine went from being a good moneymaker to a seldom used course without even irrigation for the greens and tees. This layout was only used for a decade from 1973 to early 1984 and it was then replaced with the “Three Equal Nines, Red, White and Blue, 27 Hole System”.

This design change had its positives which were increased revenue for the newly built clubhouse and added length for the 18 hole course. On the negative side it was this layout change that caused the beloved third hole to be lost forever. #3 was a short, severely uphill par three of only 124 yards but it was a challenging hole with trees in play, a sloping green and a cool “yellow brick road” path to make it easier to scale the steep hill in front of the green. Finishing a round on the 18 hole course on current #9 of the Hickory layout was not nearly as much fun as finishing on today’s 18th. Changing the best par 4 on the course, the 12th hole, into a long tough par 5 with the tee in the middle of today’s 8th fairway was not a popular decision. Some day when you are playing #8, stop for a minute on the old tee for this long par 5. The tee was on the mound on the right side halfway up #8 fairway. The difficulty of the hole will quickly become apparent.