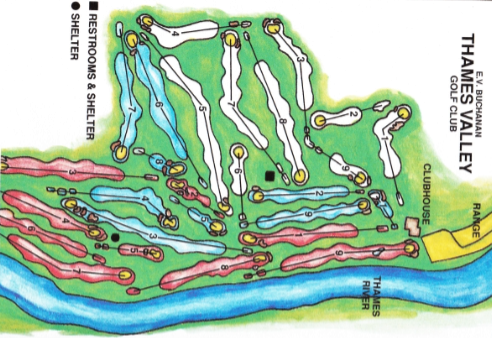 John Innes designed the majority of the holes at Thames Valley. Bill Fox designed seven new holes and greens and changed the routing of the holes for this layout with the help of consultant Rene Muylaert

White #3 – presently #4 on the Hickory Nine
Length is of little value off the tee on this hole…..positioning is everything

Although this layout may not have been popular with golf purists, it was very successful in its goal to provide accessible, affordable golf to Londoners while providing a solid self sustaining business model.

No layout change at any City of London golf course has ever caused anywhere near the controversy that happened as a result of the plan and implementation to change Thames Valley into three equal, regulation, par 35 nines. The changeover to this layout occurred on June 15, 1984 but the controversy began as soon as the plans were unveiled in May 1982. Thames Valley at the time had a fully irrigated, par 72, 18 hole layout and a short executive nine of par 30 which had virtually no irrigation of any kind. Play had dropped off at the nine hole course in recent years since 1973 when the executive course had been shortened. Other golf operations had sprung up on the outskirts of London and existing courses like East Park had improved their product significantly. Suddenly there were a few more options for public golfers.

The motivation to try to improve the course in this fashion was almost certainly a result of the success of opening a third nine at Fanshawe the year before. 27 hole golf operations have several operational advantages such as providing 18 holes for players during aerification or pesticide applications, accommodation for members during outside tournaments and economies of scale for turf equipment and irrigation systems. 27 hole golf operations are efficient. The fact that there was no irrigation on the entire northeast corner of Thames Valley in 1982 was amazing……..not even for the greens. The decision to operate both London PUC courses on an equal footing with 27 hole layouts with the nines identified by colour [Red, White, Blue] was a reasonable plan. At Thames Valley the decision to include irrigation to all of the holes as part of the changeover was a big plus, and a virtual necessity. The project was a success. It came in under budget for construction and because revenue was being generated from three nines, it was a financial bonanza.

Not all was well however. The three “equal” nines were not all that equal and there were some strange walks from tee to green. Eventually the course ran mostly like it always had with the two best nines [Red and White] functioning as the “18 hole course” and the short, somewhat disjointed Blue Nine functioning as the “Nine Hole Course”. During the salad days of golf for the City System in the 1980’s the two 27 hole layouts at Thames Valley and Fanshawe basically provided enough excess revenue to finance the construction of River Road and by carryover effect, the final nine holes of the Quarry and the Parkside Nine. 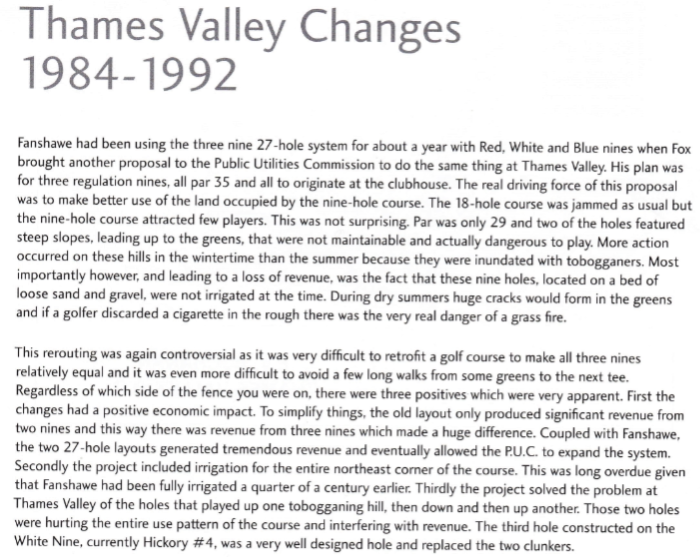 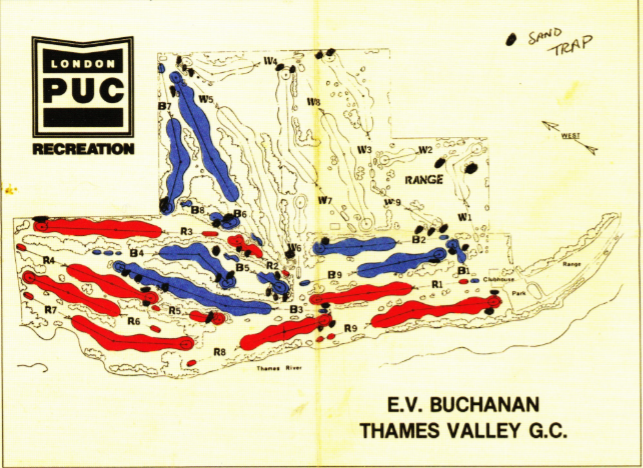 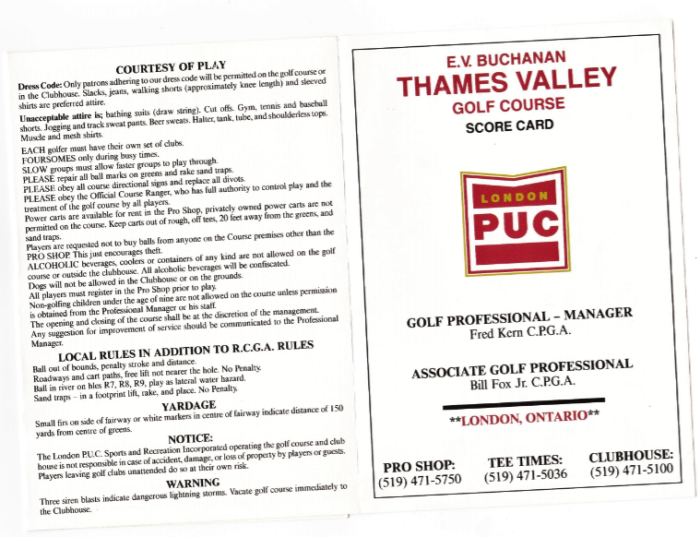 Only a short commentary is necessary here. The 27 hole layout at Thames Valley did exactly what it was supposed to do. It generated massive revenue, provided plenty of spaces for recreational golfers to play in an era when there were not enough golf courses to meet the demand and the holes were still challenging enough for the recreational player.

The problem at Thames Valley [and probably always will be] is that the potential of the course, from a pure golf point of view, to be great is just sitting there. All that it would take would be a substantial investment in renovations and maintenance and an accompanying substantial rise in the cost to play the course. Likely it would have to go to green fees only to the detriment of the loyal existing members. Tough political sell.

The decision to revert to the Classic 18 course in 1992 was only made when the London PUC was convinced that the Hickory Nine could stand on its own and provide quality golf for the players using it and to fit in with the system mandate to provide affordable, accessible golf.