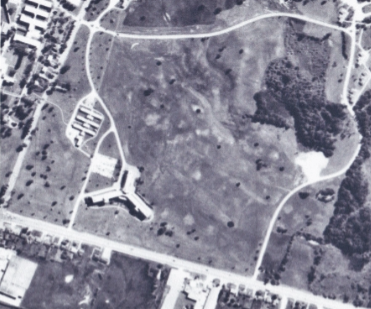 Nine hole Veterans course between Westminster Hospital and Westminster ponds. Wellington Road on the right side of aerial photograph, Commissioners Road near the bottom. London’s busiest intersection these days.

Unknown but difficult to believe that it wasn’t John Innis, decorated WWI veteran, Westminster Hospital patient and designer of Thames Valley,
Wardsville and the Fanshawe Traditional

Doctors apparently made the most use of the course. Ken Foran played the course
when he was part of the maintenance staff

Used to help rehabilitate veterans from WWII and the Korean War
Affordable [likely free for vets]
Good use of a large, unused open space
Nice rolling land that bordered a forest
Accessible location

Although we have yet to come up with a scorecard or layout diagram, we know that the first hole was a strong par 4 going south along Wellington Road, the next two holes were par 3’s and there were two par 5’s on the layout. Some patients that were veterans passed the time hunting  golf balls in the treed areas and enjoyed selling them back to the golfers.

About the Westminster Hospital Golf Course for Veterans

Westminster Hospital opened in 1918 to serve as a hospital for Veterans of the First World War who had suffered both physical injuries and mental illness as a result of the devastation and carnage of trench warfare in Europe from 1914-1918. After the Second World War from 1939 to 1945 and the Korean War from 1950 to 1953, many veterans required the same type of health care services. Westminster Hospital was at the forefront of efforts to rehabilitate former soldiers back into civilian life. The importance of recreation became to be recognized more and more as an important part of the rehabilitation process. Accordingly a golf course was designed and built on the sprawling grounds of Westminster Hospital for use both by veterans and staff.

The site is now occupied by the recently constructed Parkwood Institute. The course opened for play in 1956 and the best closing date we have available is 1984, although it may have operated in some form later than that. Many golfers remember that there was a course at Westminster because it was hard to miss being located on the busy intersection of Wellington Road and Commissioners Road. I remember seeing the flags myself and a hockey playing buddy, Joe Wocsnicz, told me in 1982 that he was the Greenskeeper there. I have not been able to find out who designed the golf course but it is hard to believe that it was anyone except John Innes. Innes designed Thames Valley, Wardsville and the Fanshawe Traditional. He was a decorated World War One veteran and he ran the Poppy Fund for so many years that he was given a Humanitarian award from the Federal Government for his efforts on October 13, 1954. Innes was no stranger to Westminster Hospital due to his World War One wounds and he was to turn 65, mandatory retirement age in 1958. In 1956 he may have been looking for a “retirement project”. A site visit turned up no visible remnants of the golf course 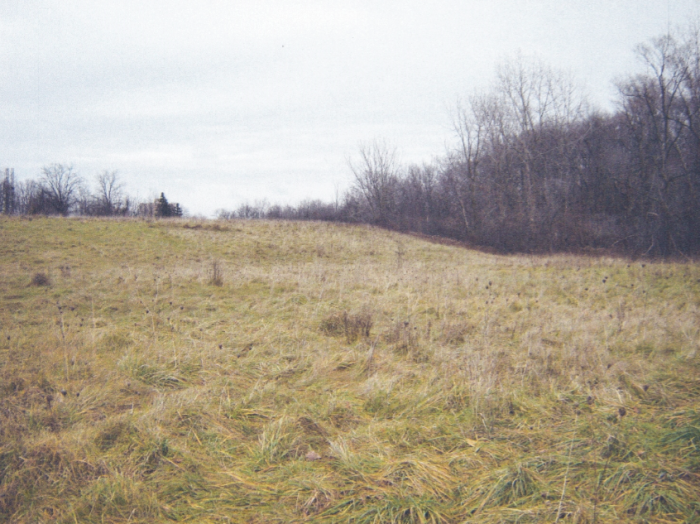 This is some of the rolling land between the woodlot and the hospital buildings that was used to build the Westminster Hospital Golf Course for Veterans. Actually a fine site for a golf course. Fairway could use a trim. 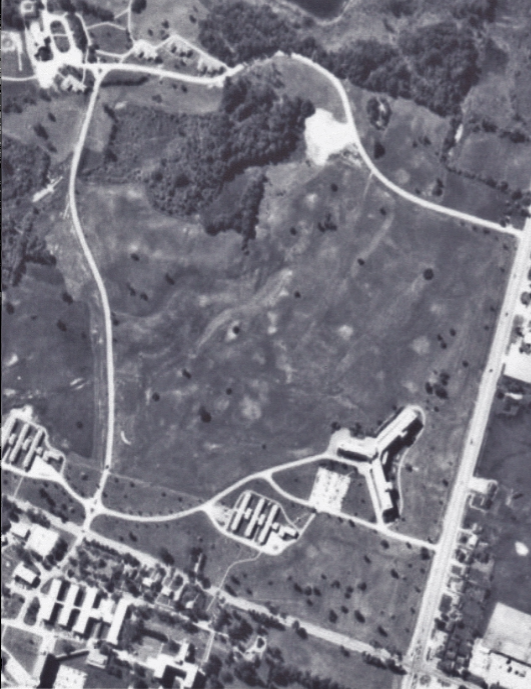 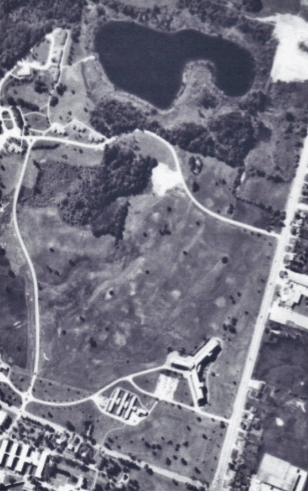 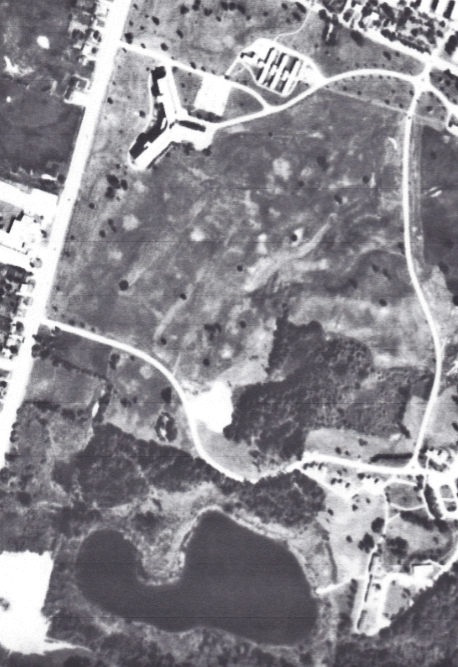 Again, 1967. Can anyone remember the layout? I see a few traps which are always easier to spot than the greens. 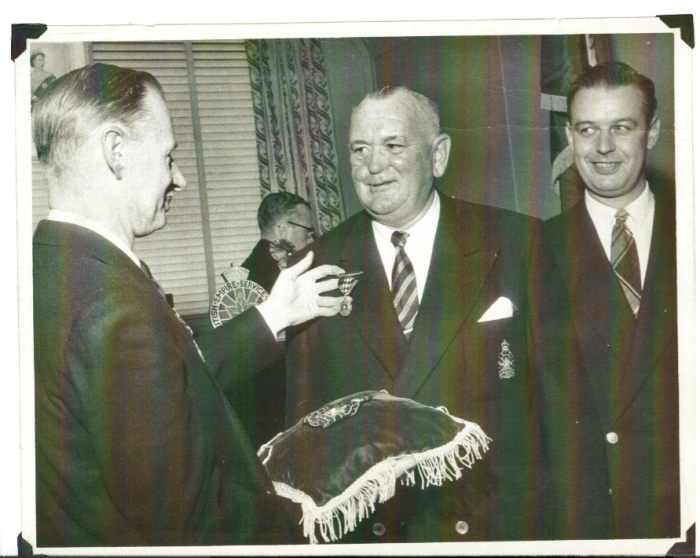 John Innes was a decorated World War I veteran and frequent patient at Westminster Hospital because of the wounds he received during the Great War. He was also the Golf Professional at Thames Valley Golf Course as well as the designer of Thames Valley, Fanshawe and Wardsville  golf courses. Innes ran the Poppy Fund in London for so many years that he was awarded a special “Humanitarian Award” on October 13, 1954. He is seen here in this London Free Press photo receiving this award. More research is needed but it is hard to believe that Innes didn’t design the nine hole course for Veterans behind Westminister Hospital. 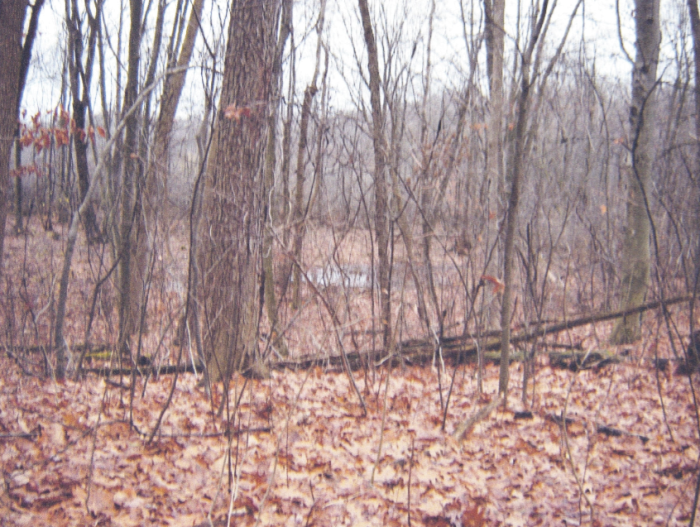 This is the dense bush that bordered the golf course to the south and east. Veterans that were patients used to enjoy hunting for golf balls in areas like this and then selling them back to the golfers, many of whom were their own doctors. 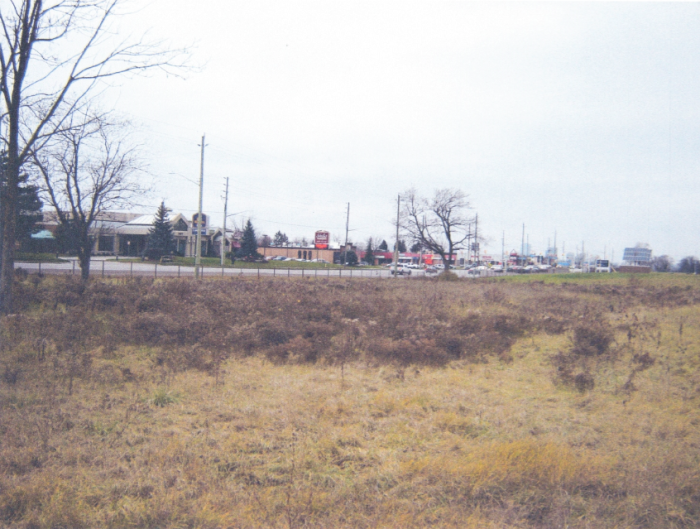 This was one of the green sites along Wellington Road. Indications so far are that it was #1 green but we would like to hear from anyone who played the course to confirm this or come up with a scorecard or layout diagram.

Some fair sized buildings now occupy the site of the Veteran’s golf course.

When you get involved in a project like this you are obviously counting on the input and cooperation of groups and individuals to give you pertinent information. Virtually everyone that I have contacted was helpful, respectful and supportive. I thought that the Federal Government would be a slam dunk through the Department of Veteran’s Affairs to provide the important facts about what can surely only be a good news story about the rehabilitation benefits of their construction of a golf course for veterans on the grounds of the former Westminster Hospital. Mom and Dad were both veterans and they spent a total of almost nine years of their lives overseas during WWII. After the War my parents spent plenty of time at Westminster Hospital and as a child I was well aware of the problems faced by returning veterans. At any rate I have received no help yet from the Department of Veteran”s Affairs despite numerous efforts. Enough said.

The importance of recreation to veterans rehabilitation and well being in general cannot be overemphasized. It was a great idea to build a golf course for these returning veterans. It was probably designed by WW I veteran John Innes. He also designed several area courses along with Thames Valley and Fanshawe Traditional. The land between Westminster Hospital and the Westminster Ponds was ideal for the construction of a nine hole layout. Any help to come up with a scorecard or layout diagram would be appreciated.