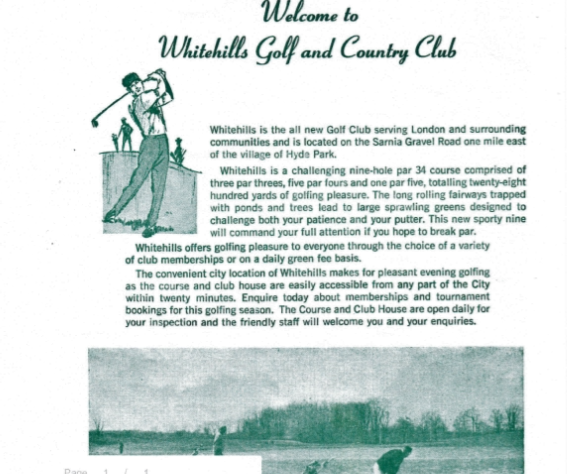 In 1964 Whitehills was a new option for public golfers.

Still looking for information but I have to assume that this course was doomed to be a subdivision before it was ever built. It provided an affordable alternative for public golf as the popularity of the sport exploded in the early 1960’s thanks to television and Arnie.

The story about Whitehills is quite short. It operated in what is now Whitehills subdivision for more than one decade but surely not as much as two. The opening date is close to 1964. My personal recollections are scant. My father and I went out there to play one time, partly because we knew the first pro/manager, Larry Cousins who had worked the previous summer in the pro shop at Fanshawe. I do remember vividly Dad’s opening tee shot. He was not a great golfer having taken up the game at the age of 49 after a work colleague told him that the only sport left for him to take up at his advanced age was lawn bowling. He was left handed and his natural sport was baseball. The first tee was located in a grove of apple trees that obviously had been left over from when the property was a farm. Dad took a wild swing and the low line drive hit one of the apple trees, about 40 yards distant, square on and the ball literally bounced back to his feet. I had to laugh. Eventually a PGA of Canada Professional was hired, Mr Don Wallace, who was an exceptional golf pro. Once Whitehills closed Don returned to Ireland where he apparently enjoyed a fine career.

At one point in the 1970’s a public meeting was held about the future of the course and many loyal members spoke hoping the course could be saved. It was not. As a result many folks in Whitehills now own “fairway lots” whether they are aware of that fact or not.

At least one homeowner in Whitehills was plagued with creeping bentgrass growing in his home lawn. Bentgrass is great for a putting green when closely mowed every day and pampered with water, fertilizer and the odd fungicide application. He blamed the bentgrass planted on the former golf course at Whitehills and it is quite possible that he was correct. Bentgrass is nothing but a weed in a home lawn. 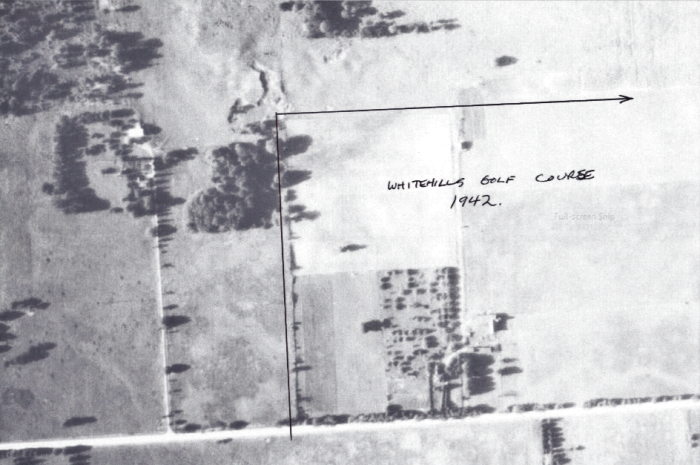 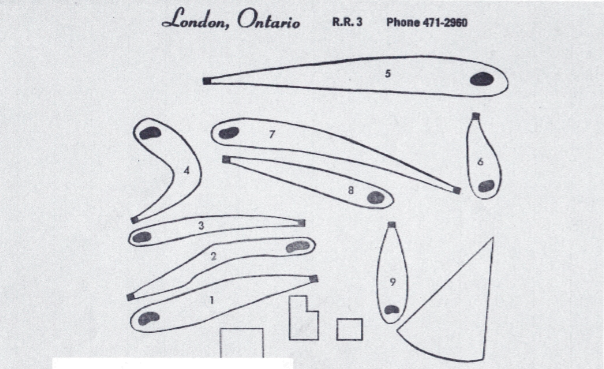 Whitehills layout from a scorecard. The pie shaped driving range adjacent to Gainsborough Road was a nice touch for a public track back in the 1960’s. 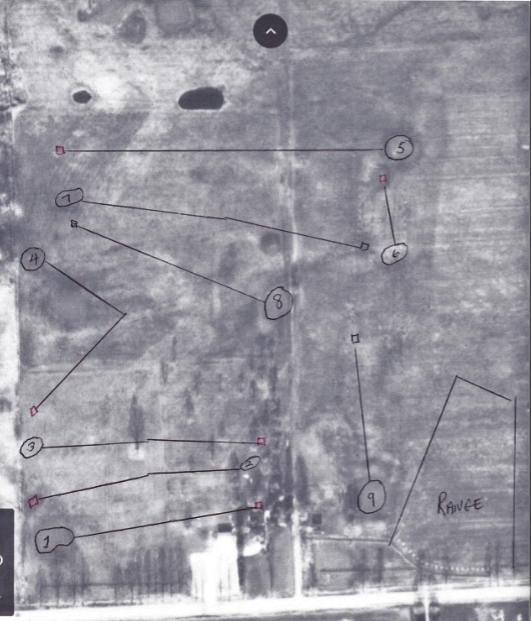 The layout superimposed on an aerial from 1967. 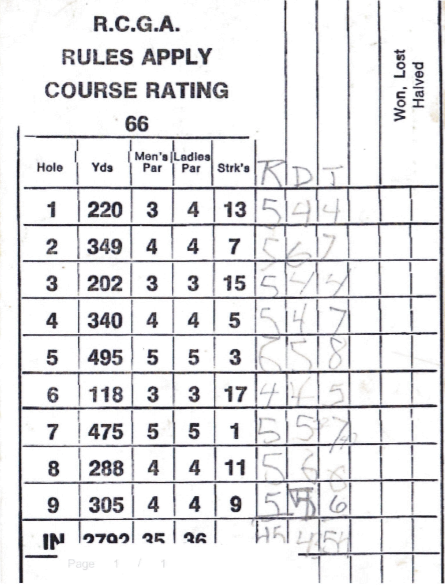 Whitehills 9 hole golf club was a square 50 acres bounded on the south by Gainsborough Road. If you live in Whitehills and your house is on Hawthorne Road, Cottonwood Crescent, Sandalwood Crescent, Monmore Road, Aldersbrook Road, Jubilee Drive, Gablewood Crescent, Ranchwood Crescent, Tanoak Drive or Jasmine Drive then it was likely built on the former golf course. You have a fairway lot! 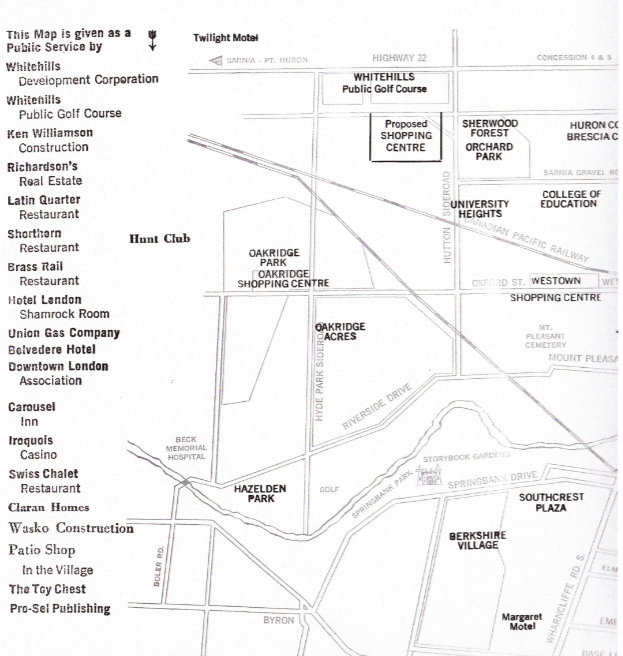 Whitehills Golf Club was identified in the official 1970 Canadian Open brochure. Tournament was held at the nearby New London Hunt Club. Note that some of the sponsors are some of the most iconic eating and drinking establishments ever in London;  The Brass Rail, The Latin Quarter, The Belvedere, The Shorthorn and the Iroquois. 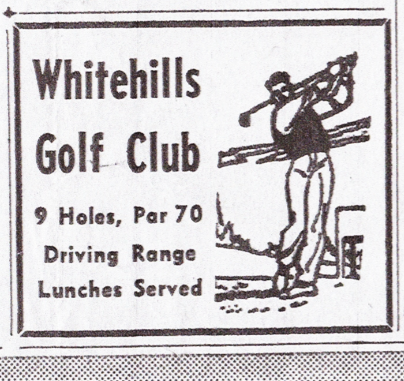 This advertisement from 1969 was always in the London Free Press every weekend. 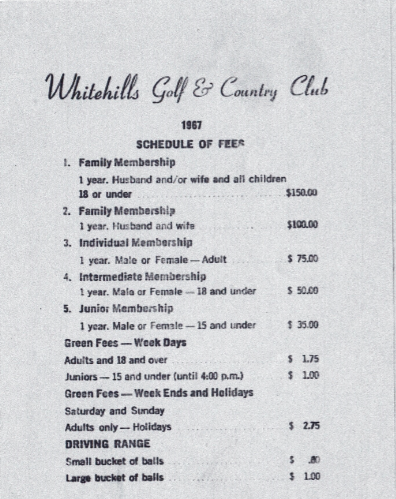 1967 Membership and green fees were reasonable. Seems like an entire family membership for a full year for $150.00 or a weekday green fee for $1.75 for an adult is more than reasonable. 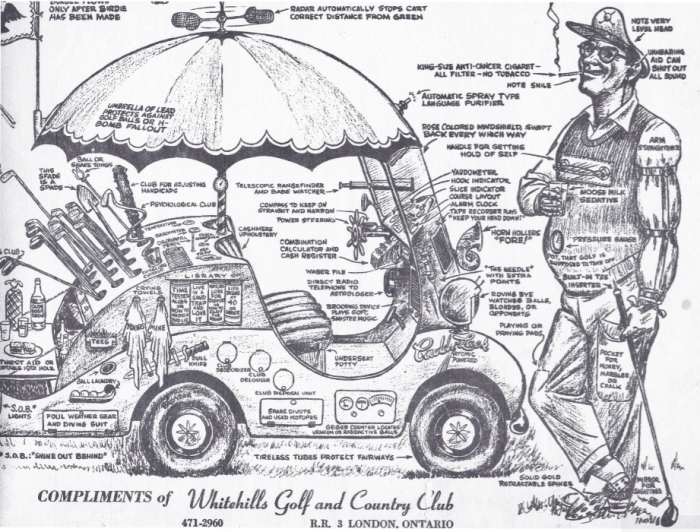 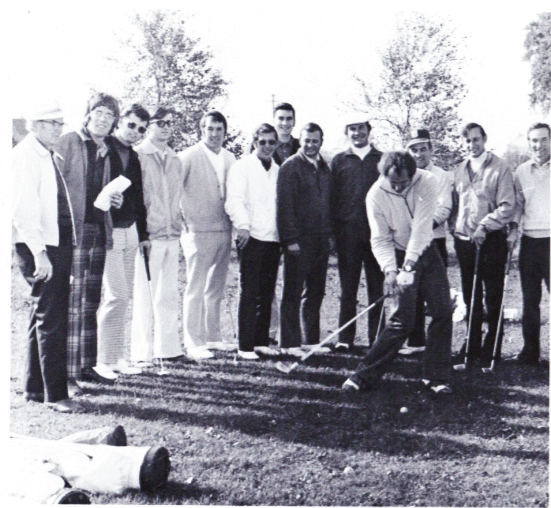 The London PGA of Canada Mini-Tour circa 1972. Don Wallace, PGA of Canada Pro from Whitehills is the tall gentleman who is 7th from the left. Can you place some of the others? Hint: Fred Kern, Bill Fox, Jack Pullen, Ken Girard, the late George Laughlean, Ed Rowe, Peter Boyce and others.

I guess the mystery that I would like answered sometime about this golf course is why was it built in the first place. It seems that it was located in the center of a housing development area and in less than 20 years it was gone. Perhaps the housing development was so successful that the land became too valuable to leave as a golf course. There was a public meeting about the future of the course and some members who enjoyed playing there spoke passionately about the importance of saving it…..to no avail.

It seems unlikely that the course was built with the intention to plow it under in just a few years. Golf courses require significant infrastructure and investments in irrigation, course construction, tree planting, maintenance buildings, clubhouses, pro shops and costly course maintenance equipment. This course even had a driving range, a rarity for a public course back in the day and obviously an investment was made in all of the equipment and accessories needed to run it. To put out a large outlay in all these areas without some long term plan for extended operation wouldn’t make any sense. Perhaps we will be able to solve this riddle before the summer is over.

Recently I have received information that the golf course fulfilled the need for some greenspace in the planning phase of what became a large subdivision. Approvals were apparently given at City Hall for the subdivision development using the somewhat unique idea of a golf course in the center as greenspace. The subdivision was a success and the 50 acres of golf course became a bit too valuable. Quickly the course was plowed under and many houses were constructed on the site.

In the meantime it is an interesting footnote for those people who own homes in Whitehills and they should be able to pinpoint the location of their house on the former course with some accuracy.