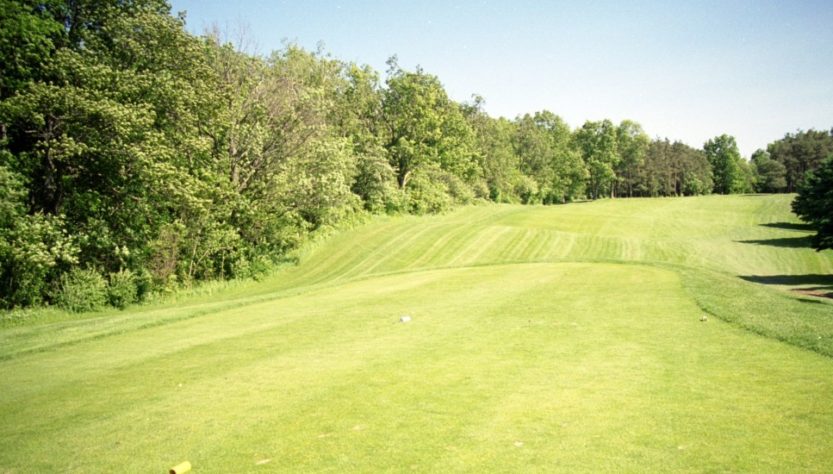 Bruce Atkins, Steve Atkins, Jeremy Atkins [the only champion of the Echo Valley Club C and match play in the same year],

Five Best Features of This Course:

4. A loyal group of members.

Bruce Atkins, the only Pro that the course has ever had, was the youngest person ever to become a “Master P.G.A. of Canada Professional”. I knew early on that Bruce was destined for a career in golf when he would arrive at Fanshawe Golf Course,  where he was a junior member,  on his bicycle. Bruce lived on Emery Street in Southwest London…….think about it.

I played a few rounds at Echo Valley in its early years back in the mid-1970’s. I also played the course recently and it is hard to describe all the changes and improvements that have been made. The first round that I played was just after Echo Valley opened the second nine to become an 18 hole layout. I was playing with a couple of buddies and the daughter of the Director of Golf for the City courses. She was a good player with a bit of a loopy swing. She got in trouble early in the round on the second hole because the uphill slope was so steep. She flailed at the ball about a half dozen times before she could reach the top of the hill. Needless to say she was a bit frustrated but we all got a lesson about the elevation changes at Echo Valley. In those days there was only one set of tees at Echo so our female golfer asked “why” when we returned to the pro shop. The answer was “women don’t play out here”. Now the course can accommodate all types of golfers and the Ladies par is 73 @ 5,249 yards.

Originally back in the 70’s the course had an easy start. #1 was a short par 5 then and #3 was shorter with a rock hard fairway. I remember my first round lipping out a short eagle putt on #1 and then getting robbed on a birdie putt on #2.  I managed to make an eagle on the short par 5 third so I was three under after three with two lip outs. The course is much more difficult now.

The positive changes are apparent right off the bat. The first hole used to be a short par 5 to a tiny blind green and a cedar encircled swamp dominated the right side. The hole is now a strong par 4 with a new green and the swamp has disappeared. The 4th hole used to be a 90 degree dogleg right but a new green and hole design have made that hole much better. The sixth hole used to be a “hit and hope” blind shot down a steep hill but the new 6th is well designed and is probably my favorite change on the entire course. The 8th hole is now a bit shorter and more playable for the average golfer. Originally #13 was a super short sharp dogleg right to a green that can still be seen today in the middle of #14 fairway. #14 at that time was a short par 3. The purchase of more land allowed #13 to become much longer and #14 became a par 4. This was a huge change because both #13 and #14 have challenging tee shots and being out of position on either hole often leads to bogey or worse. #15 was always spectacular and a few tree removals have made it better. #16 has an excellent new green. Pleased to see that no changes have been made to #17 and it is still the same diabolical short, windswept par three that it always was.

Originally the course only had three bunkers, a “savior trap” on the left side of #3 green to keep your ball from rolling into the canyon and two fairway bunkers between #6 and #7 which were there to divide the fairways in the absence of trees. The new bunkering is an excellent addition and I like the fact that the greenside bunkers are set back from the edges of the greens. Bunkers on a public course are there to frame targets and catch poorly hit shots.

The landscaped entrance and the spacious paved parking lot are other nice touches. The course still has a few quirks like the chances of ricocheting a golf ball off the clubhouse while playing #9 or the tee shot on #16 where I have never figured out the proper line for the drive. The long uphill walk from #16 green to #17 tee is good for cart revenue and is preferable to the alternative which would be to try to design a golf hole up the steep slope.

Echo Valley has changed a lot over the years for the better. It is a beautiful chunk of property and plenty of golf for even the experienced player. Nowhere is this more in evidence than the fantastic and natural 12th hole…...perhaps the best par three in the London area. 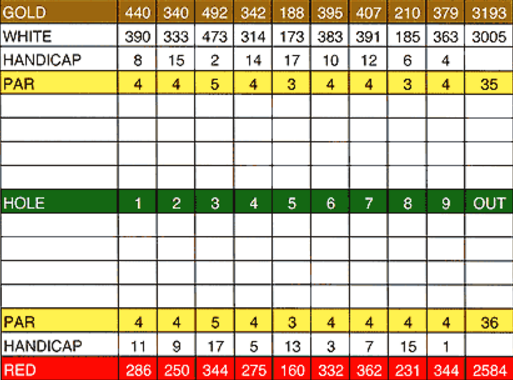 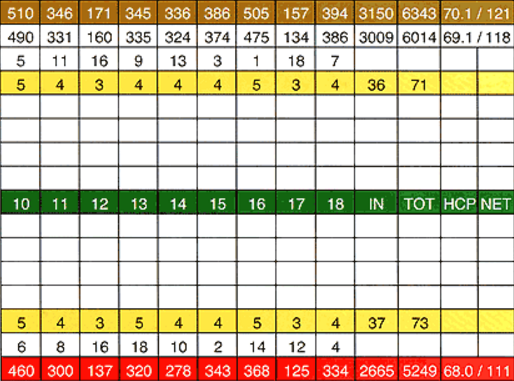 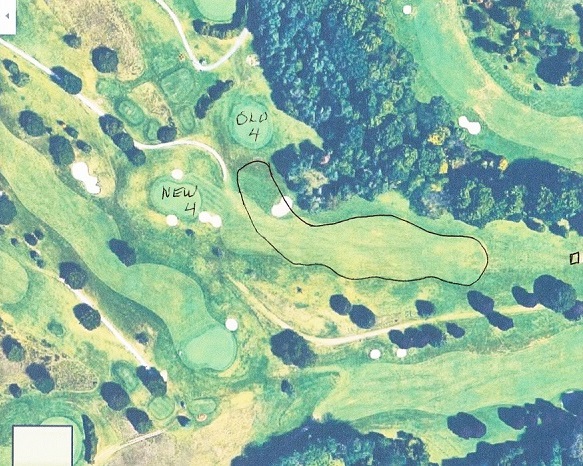 This diagram shows the improvement to #4 hole. The sharp right dogleg was often unfair as any tee shot stopping on the right side of the fairway was often blocked out by trees. The new hole is much better. 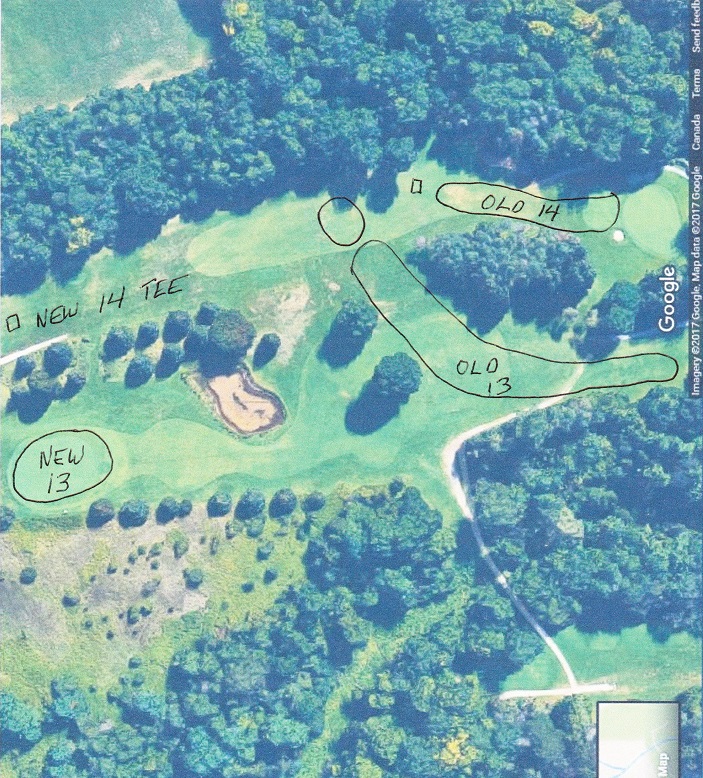 This diagram shows the improvement to #13 and #14. Originally when you stood on #13 tee it was hard to decide what to do. The green was very close to the tee, perhaps 200 yards but there were trees in the way and an Out of Bounds fence tight to the left. I have to assume that the Roberts brothers purchased the land which allowed 13 to become a straight hole instead of a 90 degree dogleg right and gave them space to extend #14 to become a par 4 instead of a short par 3. Take a look sometime at the remains of the old 13th green in the middle of #14 fairway and see for yourself what a huge improvement this was.

Art and Ted Roberts in 1971 designed and built Echo Valley and new owner, since 1999, Brian Ublansky has made many improvements but the public face of the operation for almost 44 years has been Bruce Atkins. Bruce has been the only golf pro ever at the club since October 1974. Bruce was looking for a head pro job after serving his apprenticeship under Fred Kern at Thames Valley, and he was forward enough to contact the Roberts brothers to see if they would be interested in hiring a PGA of Canada professional. The rest is history. Bruce is a former past president of the Ontario branch of the PGA of Canada. He is still the youngest person ever to be given the “Master Professional” designation. He holds the course record of an 11 under, 60, and last year he managed to shoot his age [64] for the first time. He represented Ontario 4 times in the Ontario-Quebec matches and has played with many of the greats of the game. He is still enjoying his job and still plans some improvements to his game.

Of all of the courses on our website a good case could be made for Echo Valley being the one to improve the most over the years. It always was a beautiful property with the creek and big time elevation changes, but the improvements in every area of the operation are staggering. The course that I played in the mid-1970’s bears little resemblance to what is there now with respect to clubhouse, driving range, bunkering, individual hole design and conditioning. I have always enjoyed the country atmosphere at the club. Hopefully there won’t be any subdivisions impinging on the property anytime soon. A fine golf operation.