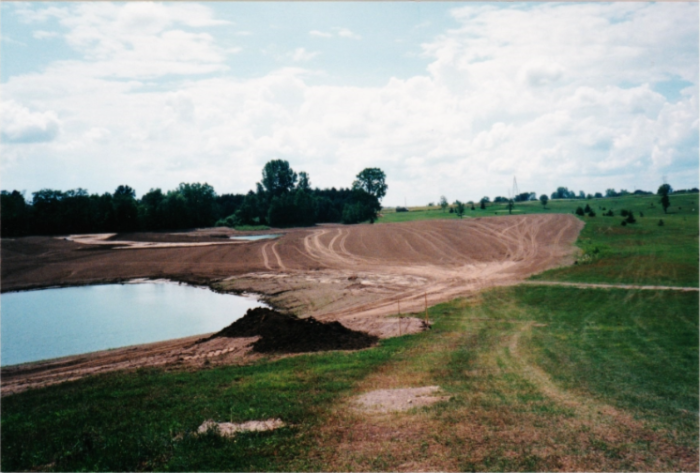 The important decision to make two full 18 hole courses at Fanshawe meant that the Quarry would not return to the clubhouse after 9 holes.
Championship of the Quarry is played every year

#10 – Par 4 – 456 Yards – the toughest tee shot in the City system given that it requires both accuracy and length. Tough to carry the pond on the left.

The silver steel sheds that dot the property are actually pump stations for the backup City drinking water supply.

About the Fanshawe Quarry, September 15, 1998 to present

The official opening of the Fanshawe Quarry course on September 15th, 1998 was a fairly long odyssey that began with a winter meeting in 1991 in a cold corner of the old 19th hole at Fanshawe, just right where the counter for the present day pro shop is located. Four current golf course employees, Mike Olizarevitch, Fanshawe Head Professional, Al Stoyles, Fanshawe Greenskeeper, Fred Kern, Thames Valley Head Professional and myself, Thames Valley Greenskeeper had been given the opportunity to come up with a design about how to best incorporate a piece of land that was a spent gravel pit into the best possible configuration of holes for Fanshawe Golf Course. Fanshawe at the time was 27 holes with Red, White and Blue nines. It was at this meeting that one of the most important and in retrospect, controversial, decisions regarding the future of Fanshawe was made.

The original 18 hole golf course at Fanshawe [today's Traditional] had not been designed with the clubhouse in its present location.
The old clubhouse stood on a raised site behind present #3 and #13 Traditional tees. Control of the first tee on each nine was easy and the course flowed along without any extended walks between a green and the next tee. Everyone was excited when the announcement was made that the new clubhouse would be built on the cliff high above the lake but this necessitated rerouting and reordering the holes and the Traditional never again had the same natural flow. When the Blue Nine was added to Fanshawe, four holes had to be wedged into an area near the new clubhouse [built in 1971] where only two stood before. Because things were congested already around the clubhouse, the four of us at the meeting agreed that the best design for the Quarry would be an “out and back” one where the ninth hole did not return to the clubhouse. In fact the ninth green is more than a mile away. In the early years of the Quarry, I wondered at times if this was the right decision but the improvements in design and condition of the Quarry course in recent years has convinced me that the decision was correct.

No part of the City Golf System benefitted more from the installation of automatic irrigation than the Quarry. In an old gravel pit if you can’t water it, then you can’t grow grass on it. Greenskeeper Brent Hoppe and his Assistant, Peter Havelka have done a masterful job of bringing this course along. Fanshawe is a huge business now with 45 holes and is situated on a massive tract of land of approximately 300 acres. The future at Fanshawe looks bright. 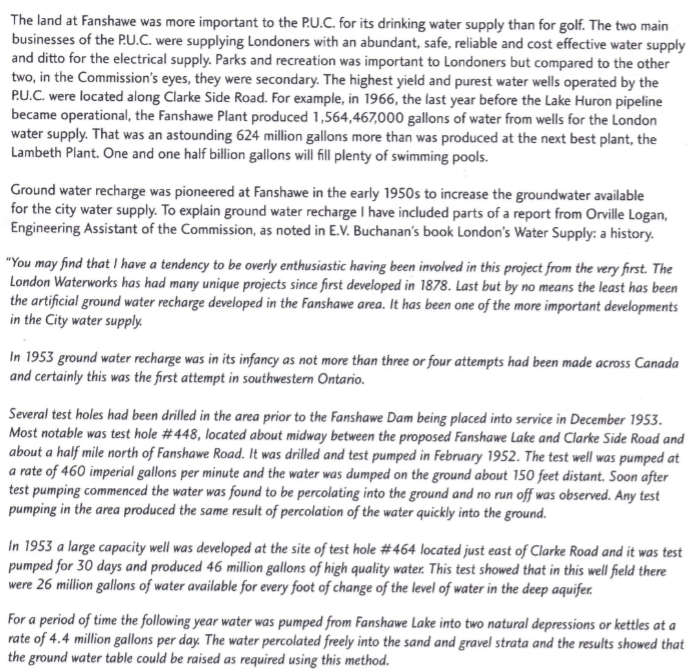 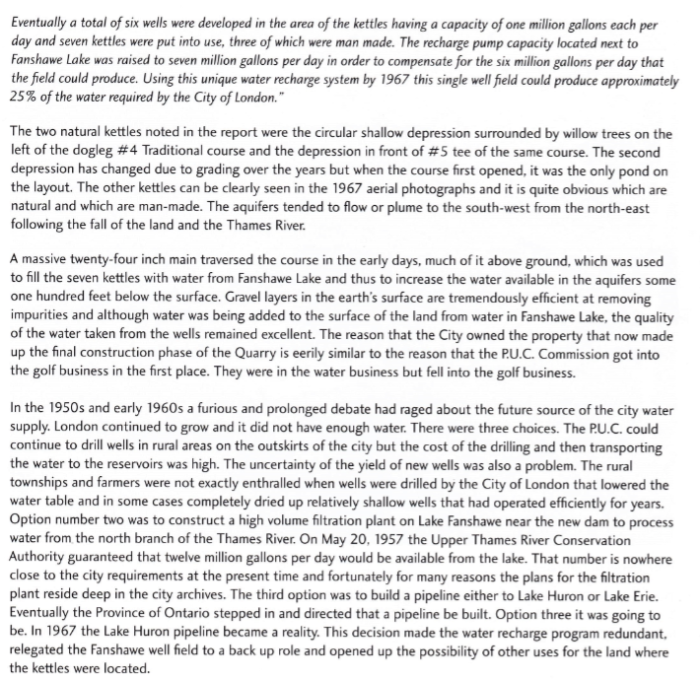 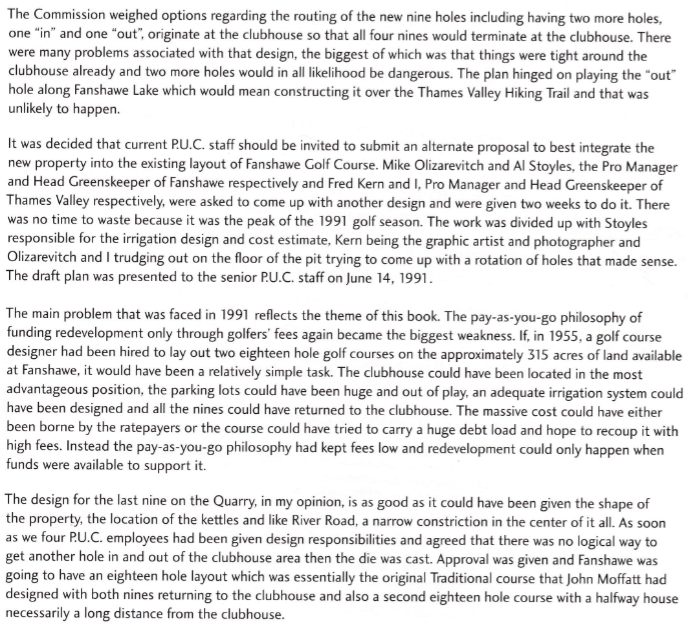 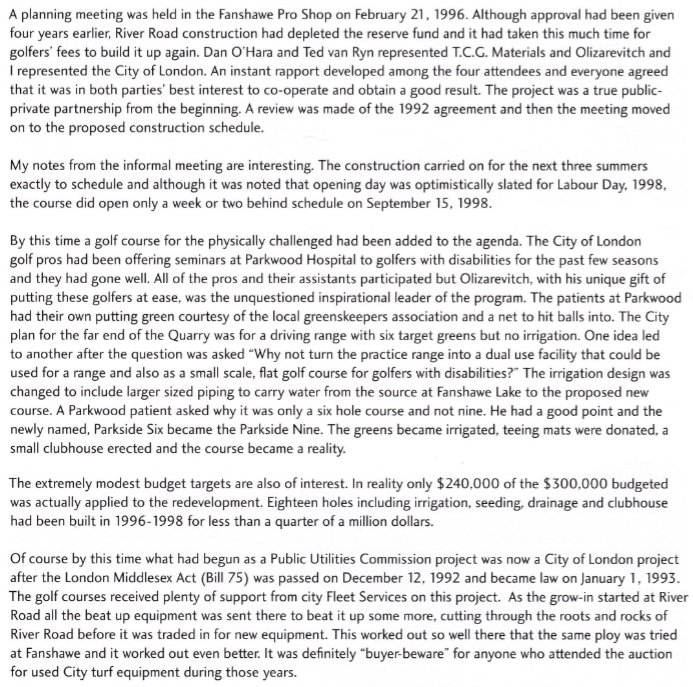 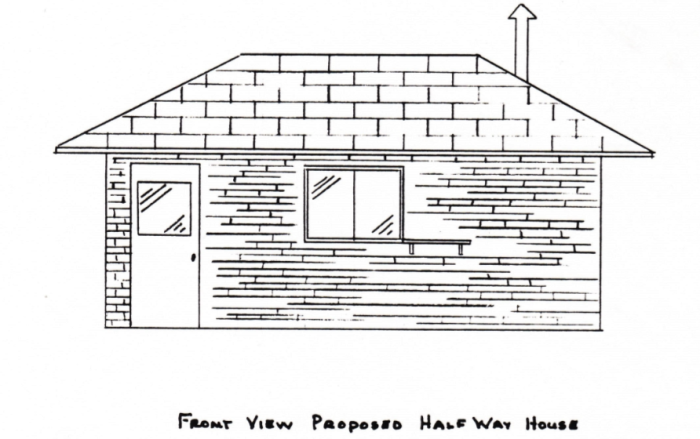 The planning process for the Quarry covered much more than simply the construction of nine more holes. It was a complete plan involving some changes to the existing layout, irrigation design, parking accommodation and eventually included the Parkside Nine. Here Mike Olizarevitch used his drafting skills to design the halfway house which would hopefully be built near #10 tee on the Quarry. 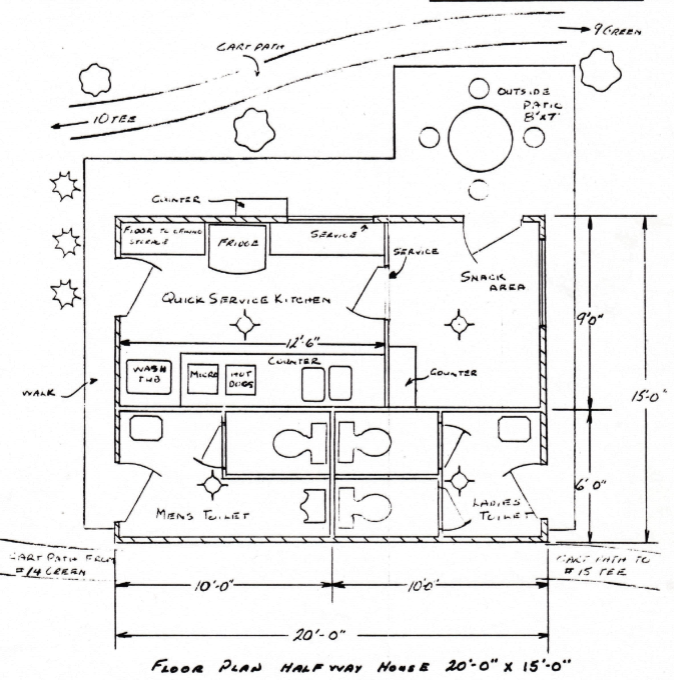 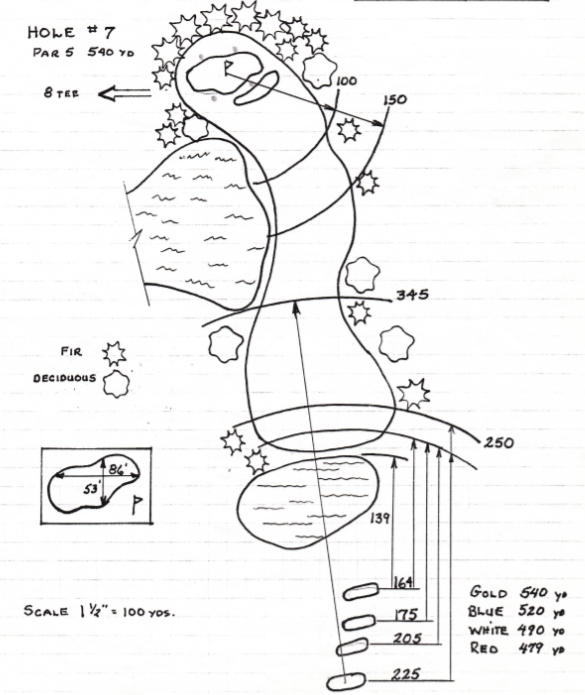 This is the design diagram for Quarry #7. Quite close to what actually was built. 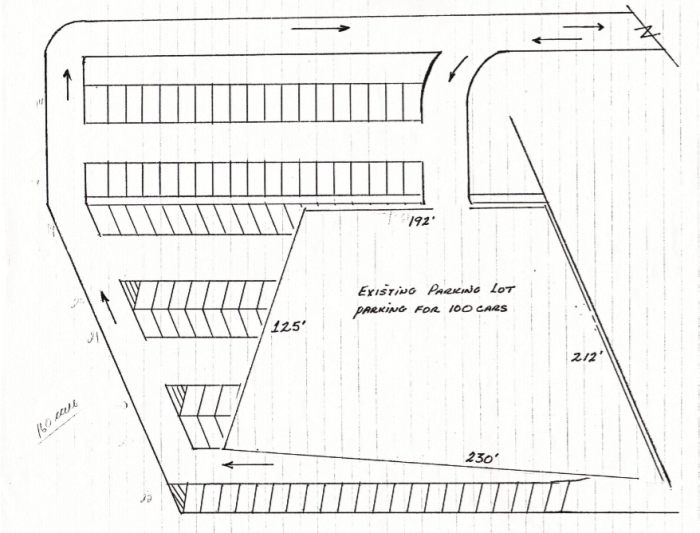 A great diagram by Mike Olizarevitch  to show how the existing, odd-shaped central parking lot could be realigned to create a lot more spaces. Hopefully it will happen someday. Make that, necessarily, it will have to happen someday. 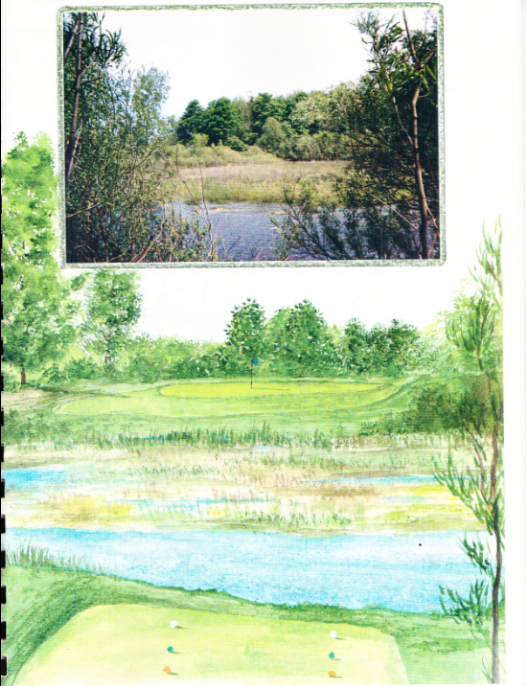 Fred Kern was good with a paint brush so this is his conception of what #11 Quarry was going to look like. Again quite close to what was built. 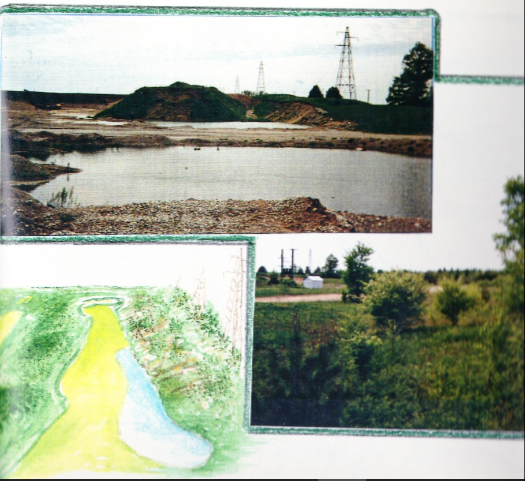 This was Fred’s drawing for #9 Quarry and actual photos of what was there to begin with. You had to be an optimist to envision a quality result. 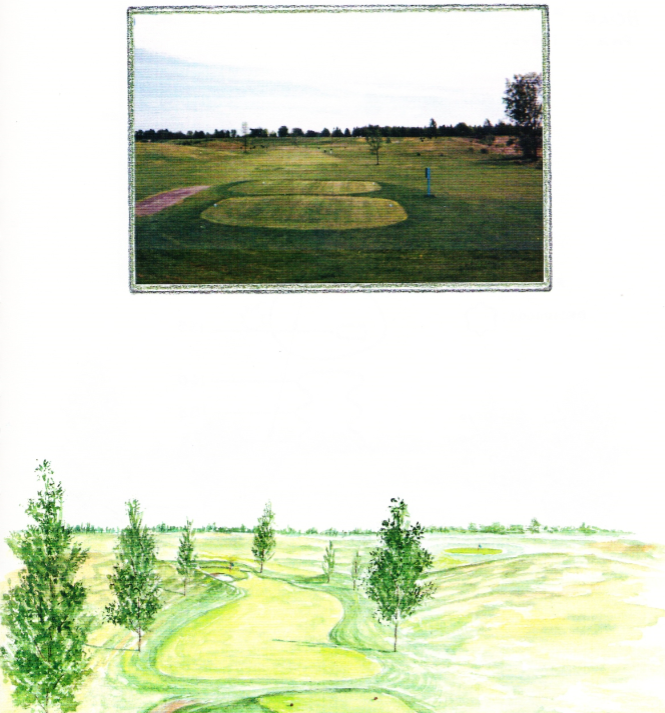 Above is an actual photo of Blue #5 hole in 1996 followed by Fred Kern’s idea of how it would look when Quarry #5 was built. Again not far off. 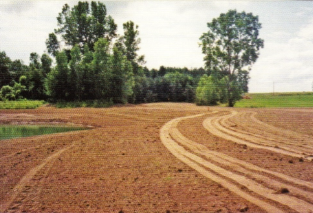 #7 Quarry just about ready for seeding. 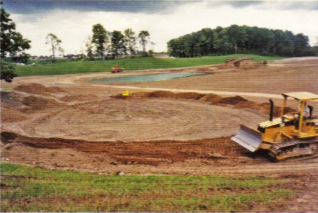 Shaping #14 green, equipment is also working on #12 in the background. 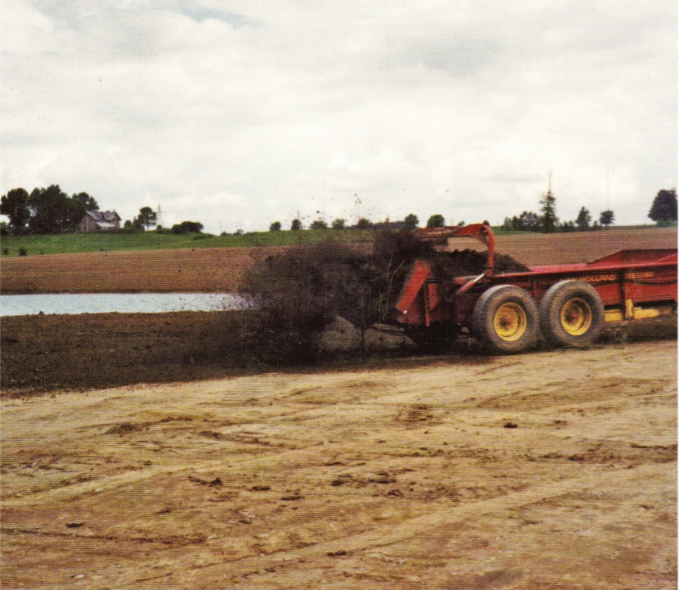 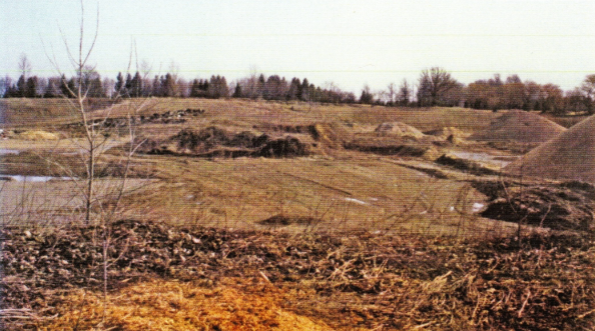 Today’s #14 hole. Optimism was a necessity when trying to build a course on this site. The former pit had a “moonscape” look to it. 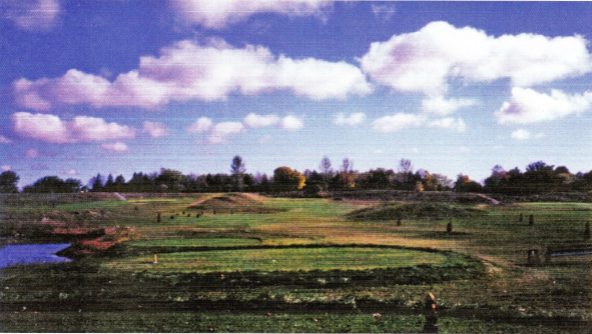 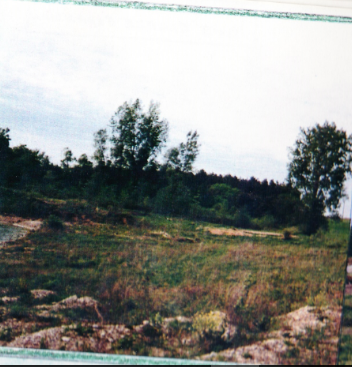 #7 Quarry before construction. A bit rough. 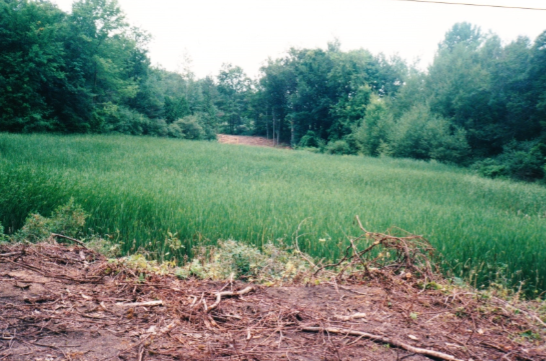 #8 green looking back across a pure stand of bull rushes toward the tee. The greensite has just been cleared. Low cost to build the fairway on this “all or nothing” par 3. 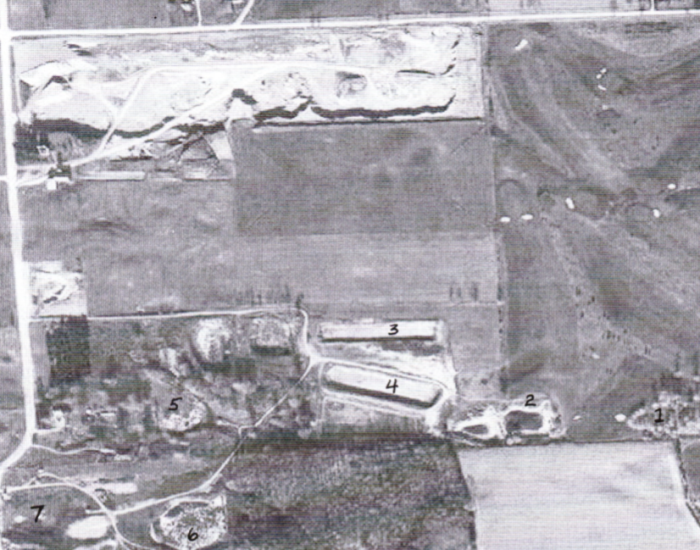 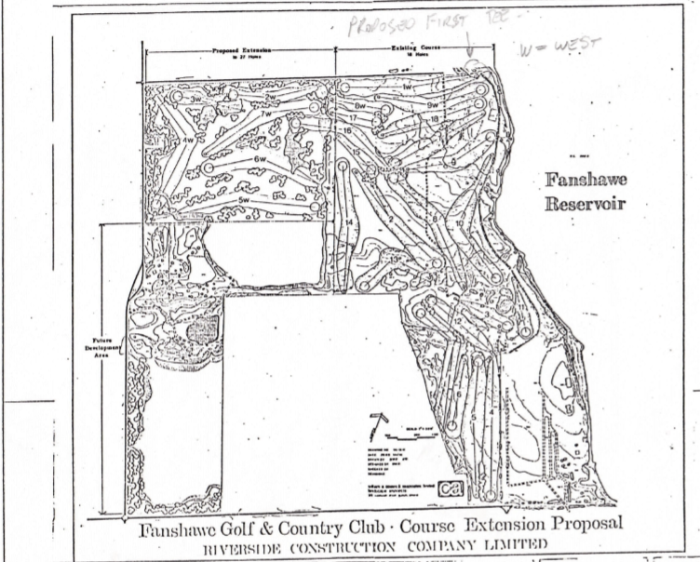 An interesting diagram showing the proposed nine hole extension to Fanshawe that became the “Blue Nine”. The area that became the final nine of the Quarry course and the Parkside Nine is identified as “Future Development Area” on the extreme left side of the diagram. Mid-1970’s. 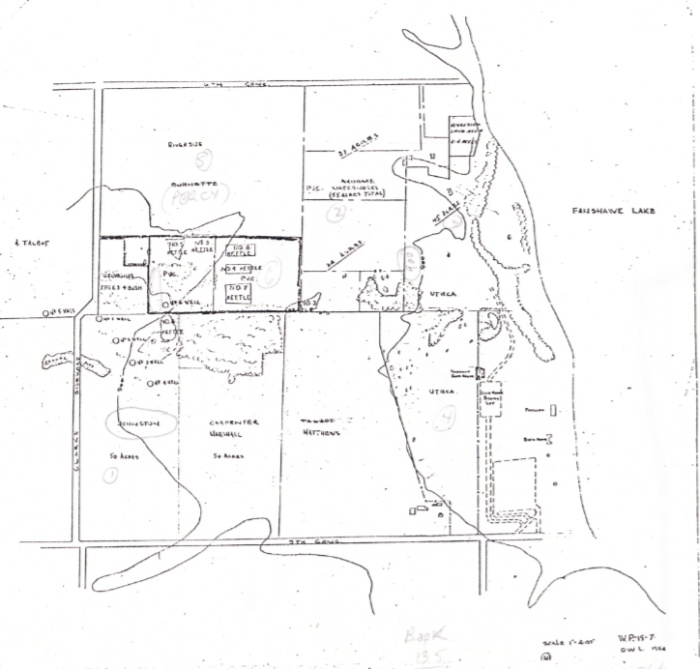 A diagram that shows the huge land area [close to 300 acres] occupied by Fanshawe Golf Course and its 45 holes. Plenty of grass to cut at Fanshawe.

The quality of the Quarry golf course has come so far in the past 6 years as to be almost unbelievable. It easily has the best fairways and smoothest fastest greens in the system. The young trees are doing well and no part of the City golf system benefited more from the automatic irrigation upgrade than the Quarry course. The bottom line is that it takes time to turn a gravel pit into a quality golf course with limited resources. Now the effort seems worthwhile.

With phenomenal growth heading towards north-east London the location of Fanshawe golf club will only get better and better. All of those people buying homes and working out in that area are going to need a place to play. The benefit of having two totally different 18 hole courses available for play will become increasingly apparent in the future.

The decision to design the Quarry as a self contained 18 hole course had as much to do with protecting the Traditional course as anything else. It was felt that the “Traddy” was a winner on its own and there was no point in trying to mix design styles of a traditional parkland design built on farmland with linksy type holes built on a gravel pit. It has taken some time but now the Quarry is an awesome place to play golf.