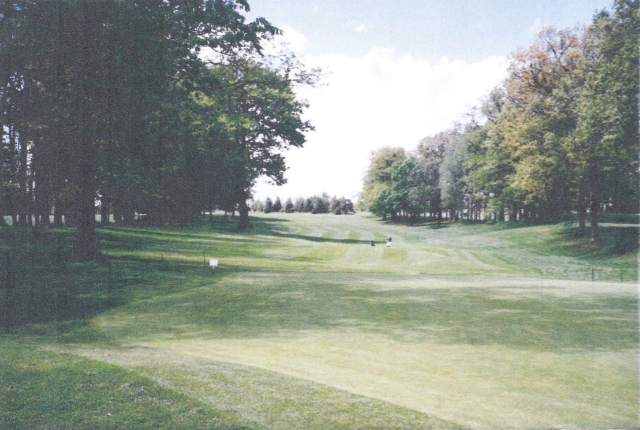 The City of London

John Innis and Bill Fox Sr designed the vast majority of the holes at Thames Valley. The major rerouting to return to the Classic layout was by Fred Kern and John Cowie

#17 – Classic – easy to slice one in the river here but left off the tee is no bargain.
What can you say about that green.

On August 26, 1992 Thames Valley reverted to the concept of the Classic 18 holes and the shorter, executive length Hickory Nine. Hard to believe that this has been the layout for almost a quarter century. The golf course is not exactly like it was from 1933 to 1972 but it is close. One hole was lost during the construction of the 27 hole, three equal nines layout and that was the old #3, a beloved uphill par three that featured a “yellow brick road” pathway to make it easier to climb up a steep slope. Because that hole is missing, all the subsequent holes are moved back a number. This worked out well because the halfway house became located at #10 tee instead of #11 where it had been for the original Classic layout. Old #3 was replaced by current #14 which was also constructed for the 27 hole layout. The holes after #14 are numbered exactly as they were from 1933 to 1973. The new Classic layout is also longer than the original by a couple of hundred yards.

The process to abandon the 27 hole, Red, White and Blue system and return Thames Valley to its original concept of a regulation "Classic 18" and a shorter nine hole course was a long and complicated one. Although the three equal nine system generated huge revenue throughout the 1980's, it seemed like there was something missing at Thames Valley from a pure golf point of view. For the 50th Anniversary of the Thames Valley Invitational in 1987, [it was first held in 1937], Fred Kern and I asked if we could use the Classic layout just for the tournament. Permission was given by Bill Fox. Fred and I printed up the booklet shown above to give to each contestant. The tournament was a great success and won by Len Foran who had grown up at Thames Valley. That event got the ball rolling but it still took more than 5 years of work, customer surveys and political manoevering to finally accomplish the goal. The current layout of Thames Valley opened on August 26, 1992. Somewhat ironically the return to the Classic was coupled with the opening of River Road, which effectively created more spaces for London's golfers to play.

The main concern from the London Public Utilities management was not that the return to the Classic 18 would be a positive development. Everyone was aware of how fine a layout it was. They were very concerned however, that the Nine Hole course which has since been renamed the Hickory Nine, would be a viable golf course and fit in with the Commission’s mandate to provide affordable, accessible golf that could sustain itself financially. Somewhat ironically the changes and improvements made to the section of Thames for the 27 hole layout where the Hickory Nine is located assured that this goal could be achieved. Irrigation improvements and a key design change that made the course more walkable in the area of the steep slopes near Riverside Drive [the tobogganing hills] meant that the course was perfect for its target market of juniors, beginners and seniors who only wanted to play nine holes. I think the current configuration of Thames Valley is the best to accommodate the wide range of golfers who enjoy playing there. Thames Valley Golf course is nothing but a greenspace treasure in a heavily built up area of London. I always think that all London golfers, no matter where they play, should at least try to play Thames once a year just to remind themselves about the value of what is there for our City. 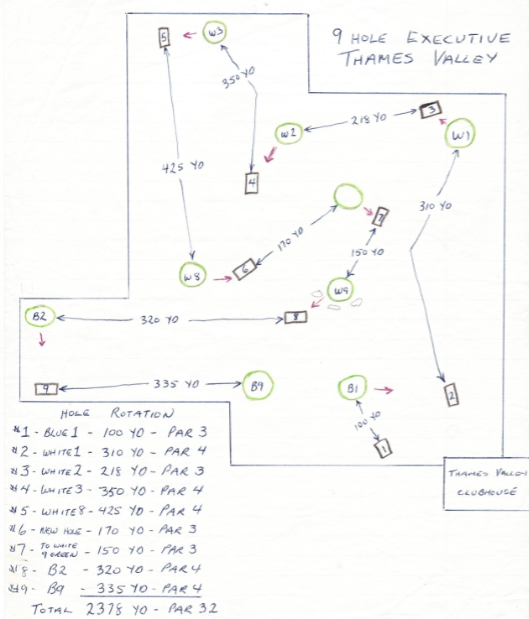 The decision makers at the London Public Utilities Commission had no trouble accepting that the return to the Classic layout would be a good thing. They were much more concerned that the Hickory Nine would fit in with the mandate to provide accessible affordable golf and could sustain itself financially. They were furnished with this diagram along with a description of recent irrigation and design improvements.

The option to return Thames Valley to its roots of an 18 hole Classic layout with a shorter executive nine was presented to the London P.U.C. as part of an “Ideas” program on August 2, 1989. Score Golf Magazine had published a list of the top 10 Public Golf Courses in Canada the previous year and the goal of the project was to have Thames Valley recognized as one of those top ten public golf courses in Canada  within five years…….hence the name of the document, Project 1994.

The “Ideas” document was fairly substantial and included far more than just reorganizing the holes. It covered required irrigation improvements, needed staff levels, clearing of vistas along the Thames River, capitalizing on the history of the property, revised fee structure and some other controversial ideas. The message was clear enough that you could have it all, a great golf course which was financially sustainable and also fit in with the Corporate mantra to provide accessible, affordable golf. This document is still available. Just email us if you would like to view it.

The present layout of Thames Valley with the “Classic 18” and the shorter “Hickory Nine” fits in best with the historical vision to provide affordable and accessible public golf to Londoners. In a way the success of the entire operation at Thames Valley hinges on the value, quality and number of rounds played on the Hickory Nine. The fact that the Classic course will always be busy is a given. The Hickory Nine is not an easy test. I have played it many times this spring from the blue markers and Brian Hadley and I agree that it is the toughest test to shoot par on in the City system. Undulating terrain, small sloped greens and tricky holes abound. In particular the 4 hole stretch from #3 to #6 is extremely difficult.

The present layout of Thames Valley opened on August 26, 1992.