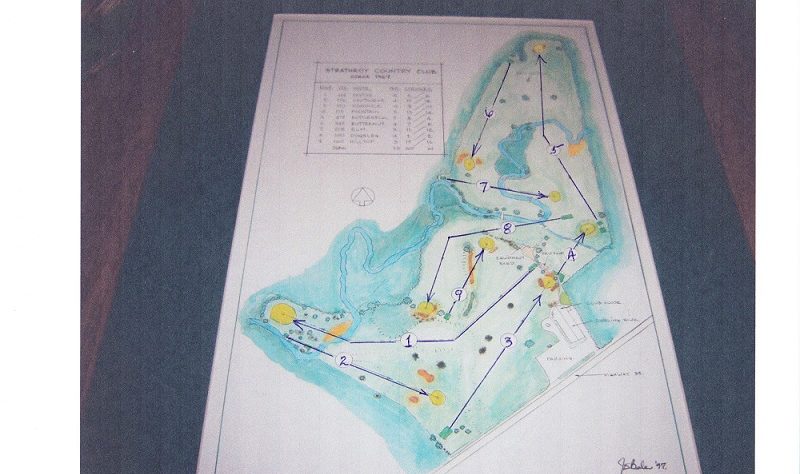 In the 1960’s each public golf course had its own short tagline used for advertising purposes and Strathroy’s was ‘Southwestern Ontario’s sportiest golf course”. That was an apt description for this nine hole track.

A group of seven Londoners including Ken Winser and they renamed the club Bear Creek,

In 1975 Strathroy opened with 18 holes after a redesign by Rene Muylaert.

George Kinman designed the original nine hole course in play from 1934 until 1974.

Charter member course for the inaugural season of the Junior Tyson Tour,

On the original Nine hole layout the signature hole was a tie between #4,

the infamous “Mountain” hole and the tough #8,

a sharp dogleg left to a sharply elevated green.

#7 on the original 9 hole course was a tough, 205 yard par 3 with the river in play and undulating ground in front of the green. It was not a lot easier than the 8th.

Five Best Things about this course:

The claim that this course was built in 1914 can now officially be laid to rest.

In the 1960’s each public golf course had its own short tagline used for advertising purposes and Strathroy’s was ‘Southwestern Ontario’s sportiest golf course”. That was an apt description for this nine hole track. For many years now there has been an error circulating that this nine hole layout was built in 1914 which would easily make it one of the oldest in this area and older than any other in London except the “Old Hunt Club”. This has unfortunately been exposed as an “alternative fact” used for marketing and the true beginning date is 1932. Documentation on subsequent pages will hopefully prove the truth.

The sportiness of the original nine came from a good design as there wasn’t a weak hole on the property and danger lurked everywhere. You could readily it out of bounds on #1, #2, #3, #5, #6 and #8. The charming Sydenham river wound its way through the property and you could hit into the water on #1, #2, #4, #5, #6, #7 and #8. The first hole [now #7] was a challenging sharp dogleg right par 5 with OB on the right and the river running in front of the green that was tucked away into a grove of mature trees. The 7th was a 200 yard par 3 with water tight to the right and severely undulating ground in front of the green. The diabolical 8th was another sharp dogleg par 4 with OB on the left and the river on the right. Even with a good tee shot your troubles were not over as the green was perched high above the fairway on a hill and an errant shot ran away in all directions. The classic hole at Strathroy however had to be the unique 4th. Have never played anything like it before or since. Its name was “Mountain” but we called it “Volcano” because that is exactly what it looked like. It was a short par 3 from an elevated tee to a friendly green that funnelled everything into the center. Any shot that failed to hit the green was in big trouble because of the steep slopes that ran away from it on all sides. A ball that landed on the very front edge of the green could spin back down the hill and into the water. Many times golfers would chip from side to side of the greens surface in an effort to get back in play.

Bob Willis was the pro in the 1950’s and 1960’s and he ran a unique junior golf tournament. There were only two prizes that you could win. One was sleeves of “Arnold Palmer Poly-Dyne” golf balls and the other was cases of Pepsi Cola, provided by the sponsor. The first day was qualifying and you had to finish in the top half of your age group in order to continue to the second day. The second day was 36 holes, four times around the capricious nine holes. At the end of the second day you were both physically and mentally exhausted from tangling with the demanding layout.

My golfing buddy, Bill Laughlin and I were like a lot of junior golfers at the time. We loved to hunt golf balls for use in future rounds. The thought of buying a golf ball just didn’t exist. After the 1968 tournament the lure of hunting balls after a tournament on a course where you could lose balls in a heartbeat, was just too much for us. We were foraging along the riverbank of #7 when we heard over the loudspeaker that I was supposed to be teeing off in a playoff. Bill and I raced up to the first tee with wet and grass stained clothes. He caddied for me and I won the playoff.

In 1975 Strathroy expanded to 18 holes. Lots of them were narrow and in the initial years there was plenty of undergrowth to make it play even tougher. The beautiful site will always be both a challenge to play and a challenge to maintain given the shaded green sites and the unpredictability of the Sydenham river.

Each hole at Strathroy had a name. 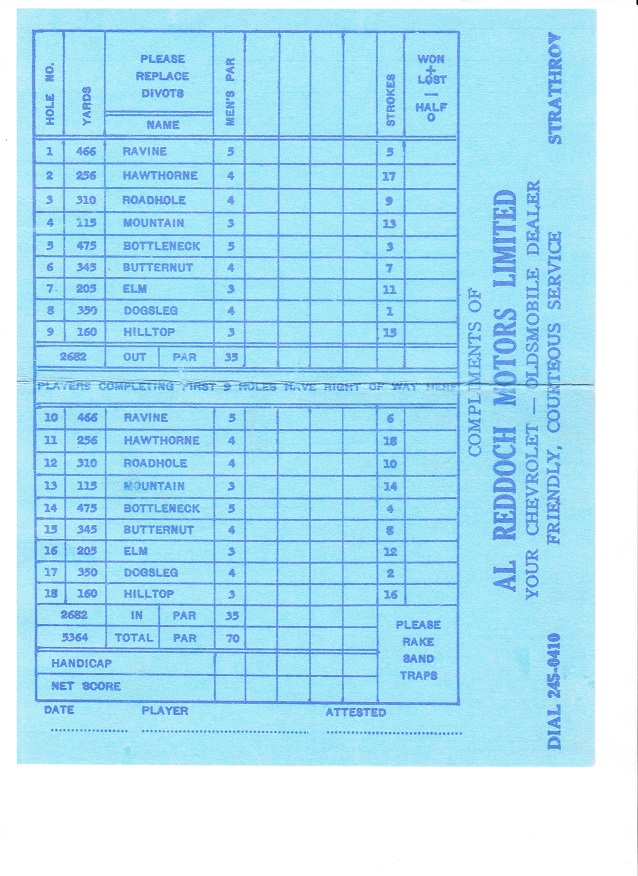 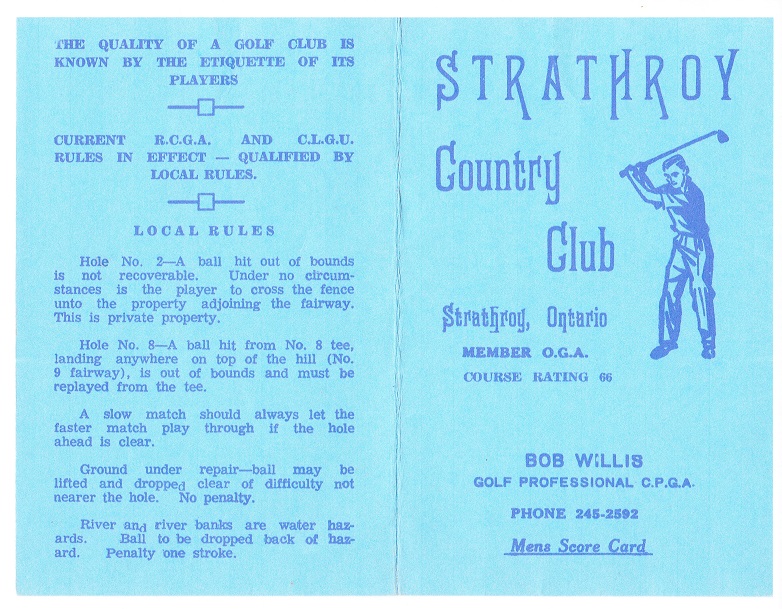 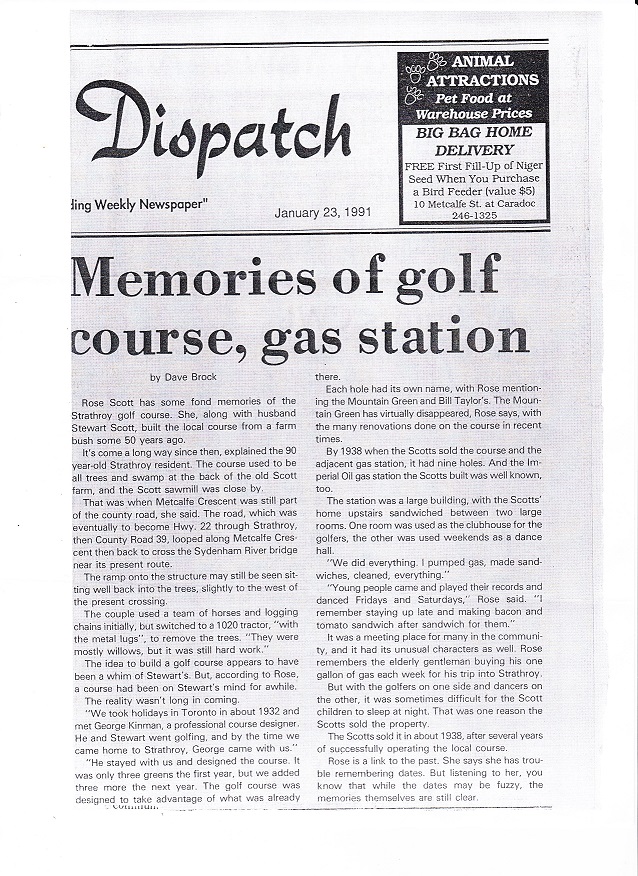 At best, the future of Bear Creek, the former Strathroy Golf Course is cloudy. In the mid-1970's the management of Strathroy was contemplating going from 9 holes to 18. Other courses at about this time such as St. Marys, Belmont and East Park had all added 9 more holes or planned to do so. Bill Fox Sr was the Supervisor of Golf for the City of London courses at the time and he was asked to make a presentation to the Strathroy management about the type of revenue increases to expect when going from 9 holes to 18. Even Bill was surprised when the new 18 hole layout was open that the course just didn't seem to do as well as hoped for.
Now, not only has Bear Creek experienced some difficult years but competition in the immediate area has ramped up considerably. The limiting factors for Bear Creek seem to be the narrowness of the holes through wooded terrain that prove too challenging for beginning golfers and periodic flooding of the beautiful Sydenham River, even occasionally in peak golf season. It is OK to have some tight holes on a public golf course but a steady stream of them which keeps your new $600.00 M2 Driver in the bag most of the time, is not good.
On the positive side, Bear Creek is situated on a beautiful property and a walk around a few weeks ago confirmed just how nice it is. There will likely always be a golf course at Bear Creek because the vast majority of the land is flood plain and unsuitable for development. The same cannot be said for all of the golf courses in London and area. Also there is a long tradition of golf at Bear Creek and a loyal following of members that are not interested in playing anywhere else. The club has survived for close to 90 years at its present location including the inevitable ups and downs of a long term operation. It may still be there a century from now.