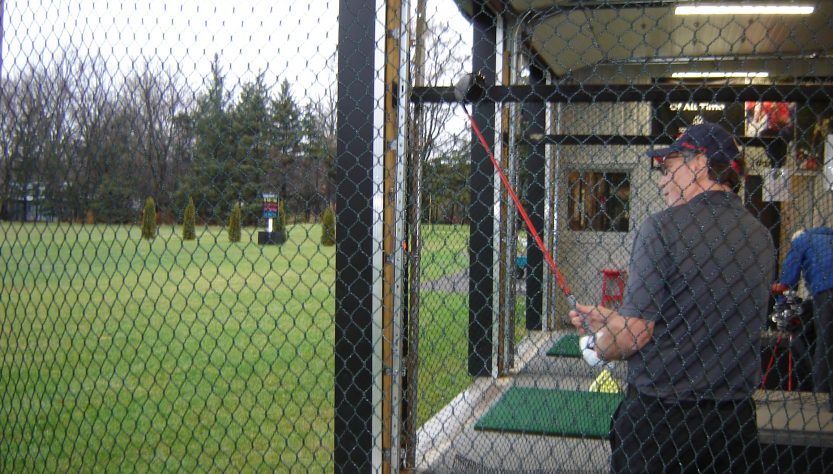 Ohio Sand in the practice bunkers

Five Best Things About This Range

Open all year round; the bays provide shelter and warmth in the winter

Big improvements are planned for the 2019 season including a patio and outdoor mini-golf.

Golfers in Canada and indeed all countries with an extended winter, face significant challenges if they want to improve their games. The enforced layoff of up to five months does nothing good for the swing and gives you the feeling that you spend the first month of the outdoor season trying to get back to where you were when the previous season ended. To avid golfers the long layoff can seem to last forever and does absolutely nothing good for your golfing spirit.

To counter this problem in Canada golfers fight back with various strategies. The most obvious one is to physically move your body to a place where it is warm. Whether it is an extended golf vacation or moving down south for five months of the year, this option is not feasible or financially viable for everyone. Local golf courses have recently been doing a great job of extending the outdoor season but that approach also has its limitations when the snow is deep and the thermometer tells you that you would be better off beside a fireplace. Indoor golf ranges such as the one at Greenhills have proven popular and the 25 - 30 yards of flight at least gives you a decent indication of where the ball is headed. Golf computer simulators are improving every year and they can add a social aspect for a golfing foursome who are starved for some semblance of the game. Only the golfers with the worst addictions will put up nets in their garage or basement and try to keep the swing from deteriorating too much over the winter. I have tried some or all of these strategies in the past with varying and uneven results.

Last October I was out in East London and decided to visit a new business that I knew had opened up only the previous spring. I didn't know that much about it and really was only there to check it out. It only took me about four minutes to realize that this was a new idea for this area and that this was a new option for a golfer who was not planning on going south this year. Three of the indoor bays were full but the fourth stood empty. I just had to try it out so I asked if I could have that bay. The answer of course was "yes" so I went back to the car to get some clubs. After hitting balls for the allotted time and seeing the full flight of each shot all the way to the ground I was hooked and had unexpectedly found my new off-season golf activity. I returned the next day to sign up as a member.

By far the most asked question from other golfers is "how do they retrieve the golf balls in the winter?" Well first of all they have a large supply of golf balls with some plans for backups should they become necessary. Additionally the staff are more than willing to hand pick balls from the range. The balls themselves are all yellow and they contrast with the white snow. The motorized ball picker can still go out at times when there is no snow. At any rate it is "so far so good" and there hasn't been a problem yet of running out of golf balls in close to a year of operation.

The Timbo Slice Driving Range is an updated version of the "Maple View" Driving Range that opened in 1994. It seems to me that the name "Maple View" was an attempt to capture some customer traffic from the Maple Ridge Golf Course which is located also on Dundas Street East and only a couple of kilometers to the west of this site. The Maple View was owned and constructed by Gabe and Julie Tomasi. Tim Ament purchased the business and the renamed Timbo Slice Range opened on February 1, 2018.

Extensive renovations and an addition to the building followed and the result is a golf practice facility that can be used year round. The main selling point for this setup is that it offers what no one else in the London area does, which is the ability for golfers to observe the full flight of the ball every day of the year. The uniqueness of this feature will go a long way in determining the viability of this type of business.

The intended future of this business is to grow. Already in one year they have gone from a seasonal operation to one that is open all of the time. A miniature golf course to be built between the building and Dundas Street is in the planning stages and may happen in 2019. A large patio at the back with a view of the range is also in the works and a liquor licence is likely in the future. The operation features an ice cream shop called "Fore Scoops" and it boasts Shaws ice cream. The ownership hopes that Timbo Slice Driving Range will become a family destination in the future.